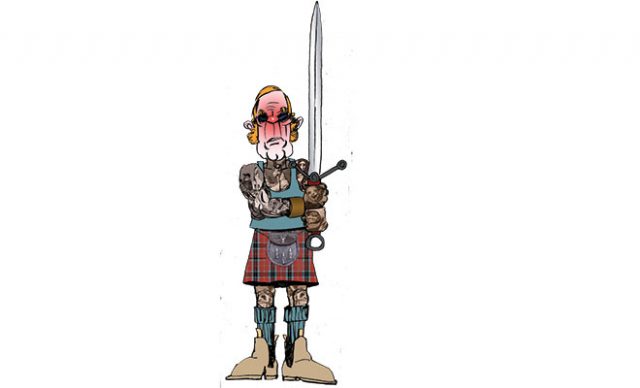 If you’re following this tributary, you will know that I am the male spawn of a woman whose sole income is generated by theft. You will also have learned that I have four sisters, Chrissie, Rob, Myra and Lindy-Lou, all of whom are up to their necks in this enterprise. We have, thus far, a foolproof method of relieving businesses various of their products without the burden of offering coin of the realm in exchange. We then, what we call, ‘re-own’ these products through the family store, the Warehouse of Hope, for a considerable discount. Yes, I hear you, there is a slight moral, fiscal [and certainly, legal] imbalance here, but we comfort ourselves in the knowledge that those who might not be able to get, get from us. We sleep well.

Mum has formed an alliance with local biker boss Nitro O’Nitro, whose talents and business nous align with some of the gaps in our own activities. There are other benefits that mum enjoys that I have no understanding of.

Mr O’Nitro’s junior partner, Sligo de Putin, brings colour and international flavour to our raggedy gang. A Russian emigré, de Putin forged his own special skills during the collapse of the USSR and the reformed Russia’s pivot towards some cherry-picked elements of a free enterprise economy.

For my part, aside from the day-to-day thievery, I have a special skill: I am massively talented with numbers and the backroads and side streets of accounting. I am 16 years old. I am indispensable.

An irritant has been plaguing our ability to plan and move forward. Mum had been receiving threatening phone messages demanding unspecified ‘payments’ from an anonymous stalker. Mr O’Nitro [as mum would have us call him] deployed his ‘contacts’ to seek out this nuisance. It turned out the villain was our father, who had managed to avoid us for thirteen years. As a result, dad is being transported from the ‘meeting room’ at the rear of the HQ of Mr O’Nitro’s [and now mum’s] conglomerate to one of Sligo de Putin’s Go in Peace ‘departure’ franchises – as he refers to his funeral homes – where an appropriate chastening is to be administered. Dad, aka Maurice Shevel, is cable-tied to a chair.

‘Bought a lottery ticket, son,’ dad chuckled as he was carried past on his sedan chair, hefted by two of Mr O’Nitro’s employees – Gavrilo ‘The Crowbar’ Nero and ‘Hot Fat Vat’ McKinnon.

She told me that his neat little apothegm summed up dad’s world view: always reach for the low hanging fruit, no matter the odds stacked against you. He had lived his life by this creed. Known as ’Shortcut’ Shevel ever since he tried swindling his grade school classmates out of their lunch money, he had managed enough wins to allow this motto to inform his life. There had been many more losses of course, but when the wins came, a finely-honed self-delusion allowed the downside to be miraculously washed away.

To his credit, Maurie never whined when things didn’t go according to plan. When there was no escape, he would accept whatever retribution was coming his way, his mind already having moved on to the next scam. On this occasion the new outing would, of course, have something to do with the funeral industry, but we’re getting ahead of ourselves.

So it was an apparently nonchalant Maurie Shevel who was delivered up to one of Sligo de Putin’s Go in Peace ‘departure’ franchises. But like a duck’s feet, under the surface his mind was racing at the myriad possibilities that the death industry might offer his particular skill set. His escort was simultaneously baffled, disappointed and also slightly admiring of Maurie’s equanimity, having anticipated the need for a least a little biffo as he was steered towards his fate. Being conveyed to a funeral parlour by two substantial members of a biker gang would give most pause. But Maurie’s febrile imagination was already war-gaming a couple of commercial opportunities that might ripen from this bit of serendipity. There was always money in death.

Fitty MacTavish was as pure a Scotsman as a single malt dram. He had jumped ship in Darwin at the turn of the century and found his way to mining sites various where he drank considerable pay packets. Fitty became a union rep, and a more fierce champion of the worker you would be hard-placed to find. He quickly gained a reputation as a ferocious, if not somewhat incoherent, defender of any transgressions of workers’ rights, whether real or perceived.

Fitty’s thick Scottish brogue was no impediment to him making himself very clear as to where infringements might lie and how wrongs should be righted. While the absolute detail of what was smuggled in through his Gaelic gargle might be described as ‘muddy’, his tone, ruddy complexion and the dance of his dangerously muscled body carried the day. And that is how he got his nickname.

When a ’shiny arse’ contravened a [perceived or actual] clause of one of the myriad awards that protected his fellow workers, Fitty would unleash such a cacophony of dropped consonants, opaque sounds and filthy invective that an accommodation was quickly arrived at. If any had the temerity to question comprehension of his impenetrable blather, he would insert amongst the jumble the following: ‘Would ye li’ a fitty?’ When the answer came back in the positive, he would retort: ‘Well ye fu’un understoo’ tha’ dinnae ye!’ And with that, ‘Fitty’ was born.

In those interminable hours between knock-off and punch-in that a massive drunk could no longer bury, Fitty taught himself tattooing. Beginning on his own body, his predilection for precise copies of Goya’s etchings ‘The disasters of war’ soon earned him a growing band of acolytes. Such was his success that he surrendered the worksite for the tattoo parlour. ‘Parlour’ might be glamourising it a tad. More like a less-filthy shed than those he was used to, purloined from the mining camp that had sheltered and watered him in those early days.

When an unreconstructed Pommy shiny-arse took it upon himself to retrieve this dwelling from Fitty, in a vain attempt to suck up to his employer, he hadn’t reckoned on how attached to this crude shelter its belligerent occupant had become.

Nor was he aware of Fitty’s skill with a forge, where had turned some the product of his former employer into a collection of claymores – two-handed broad swords that only a Highlander of Fitty’s considerable anger could wield with any skill.

Unfortunately, Pommy shiny-arse was away the day in history class when it was explained why Highlanders are so attached to their dwellings. The ‘clearances’ of the mid-18th century took place when the hated English decided to evict Highlanders from their crofts. The greedy Sassenachs wanted more land converted to pasture for their sheep. They privileged sheep over Scotsmen.

As soon as Pommy shiny-arse opened his trap, instinct took over and Fitty set about him with the flat edge of his favourite sword. He called it Bannockburn. Look it up. Pommy shiny-arse spent the next 12 days in hospital. Fitty spent the next 12 months eating porridge in the Darwin Correctional Centre where he met Nitro O’Nitro’s brother, Speed O’Nitro. And that, boys and girls, is how Fitty MacTavish came to be standing in the cold chamber of Sligo de Putin’s Go in Peace funeral home when Shortcut Shevel was chaired in to meet his fate.

Neither Nitro O’Nitro nor mum had been convinced by any of the punishments pitched by the summit of judgey thugs that they had gathered around them. A straightforward beating, removal of a limb or two, or perhaps exile in a remote, hostile place seemed all too pedestrian. Too obvious. No, this was a misstep by Shortcut Shevel that need a very particular sanction that should accompany him for all of his remaining days.

In the end it was the sisters who brought down the sentence. Chrissie, Rob, Myra and Lindy-Lou had been privately workshopping this parental difficulty for some years. Any fealty they might have felt towards their phantom father had very early turned to a kind of visceral loathing as the older two set about destroying his reputation for the educational benefit of their younger siblings. This soon distilled into preparation for a studied revenge. They were insistent that it should be permanent, public and humiliating.

The girls had gained inspiration from their readings of Australian colonial history and some of its crueller twists. There were plenty to choose from. They were quite taken with the fate of some deserters in the early colony. One poor soul in Hobart was branded [‘burned on the hand’] with the letter ‘D’. Another, in Sydney, was tattooed with the same consonant.

When our peripatetic father returned to the fold with his clumsy blackmail attempt, the girls knew exactly what should be done..