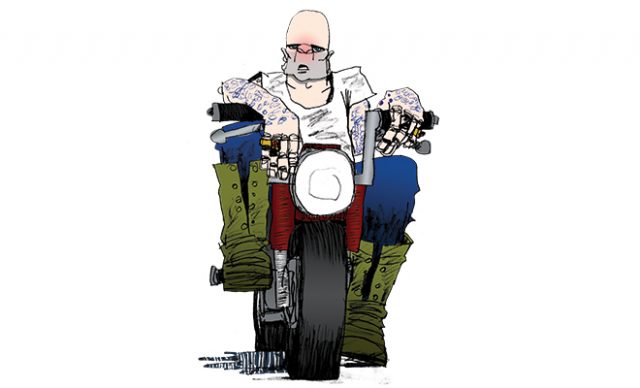 I was born into an urban kleptocracy. My mother adapted the once much-vaunted neo-liberal philosophy of ‘eliminating price controls, deregulating capital markets and lowering trade barriers’ to burnish her own marketplace activities. She was a thief. So were my four sisters. Me too. Expanding into the warehouse retail sector to boost her cashflow, a slight error of judgement meant she was obliged to partner with local bikie capo, Nitro O’Nitro. For reasons we have yet to discover, she seemed quite sanguine about this alliance. Then, her phone rang…

Mum recoiled like she’d been slapped. She held the phone at arm’s length, her furrowed face drained of colour. The self-confident visage that had only minutes ago oozed joy over a successful summit with Nitro O’Nitro, a dangerous and unpredictable outlaw biker, had pivoted to fear and loathing. Whoever was on the other end of this call had rattled her to the marrow.

She threw the phone down like it was a putrid thing, a threat to her very life force. A man’s voice distorted by electronic treachery could be heard jack-hammering a staccato message:

‘I see you. I know everything. I will collect.’

A concerned Nitro gathered her up in his arms. She recoiled and spat at him: ‘Don’t touch me!’

‘Too soon?’ he mocked, stung by her dismissal and scrambling to recover some of his brio before his comrades sensed blood in the water.

The phone was still writhing on the ground with its chilling message on repeat when Mum smashed it into oblivion with the right heel of her Jimmy Choo Diamond Train F, mesh and leather trainers [$A1,175, had she paid for them].

‘Plenty more where that came from,’
she muttered.

And then she was back. Mask in place, command restored. She took Nitro O’Nitro aside.

‘Mr O’Nitro,’ she deadpanned, ‘I would be grateful if you wouldn’t take such early liberties with our relationship. If we could arrange to meet later, out of the public eye, I might have some work that would suit your, ahh, unique set of skills.’

‘Call me,’ she told him, retrieving the memory card from the ruins of her old phone and slotting it into the new one she had unboxed while talking. She expertly made some adjustments, then thumbed its display. O’Nitro’s eyebrows climbed his forehead as his phone jangled in his pocket.

My sisters, Chrissie, Rob, Myra and Lindy-Lou, remained in a clump at the rear of the goings-on. They appeared simultaneously repelled and excited by this unlikely communion. Whether it was the stench of fuel, the throb of large motorcycles, the careless profanities of the soiled riders or the giddy allure of something primal, these signals floated just out of reach of a 15-year-old boy.

The sloven-filth-cluster’s departing racket and tang had barely emptied from the air when Mum, having shut down the Warehouse of Hope for the night, herded my skittish sisters and my bewildered self into the Mercedes V250 d’Avantgarde people mover [$A97,730, for regular punters]. She had liberated this luxury transporter from the Chadstone Shopping Precinct and had it ‘altered’ by a disgruntled German mechanic who nursed a black grudge against the three pointer.

For a woman who routinely skulked in full flout on the perimeters of the law, Mum seemed oddly rattled. The high key chatter from her daughters in the rear seats escalated as each tried to outdo the other’s experience of what had clearly been a peak moment in their already mad lives. Normally, such gibberish would invite Mum’s participation. Not this night. She turned on them with a crisp ‘not now!’ Instinct instantly cowed them.

From my second floor bed [Ferrari replica, costs others $1840], I could hear her below, seethe-pacing from room-to-room, making and fielding phone calls; hard, insistent, demand-mumblings. Later, in amongst a dream where I was a Swedish comedian doing a tight five on gathering wood, a motorcycle pulled up outside our house. An initial whispered exchange was subsumed by my Scandinavian stand-up fantasy. The new sun had slid halfway across my bedroom floor before I heard a rowdy motorcycle ride away. A late breakfast was offered by a restored and playful mother.

Nitro O’Nitro became a fixture in our lives. Mister O’Nitro, as mum urged us to call him, was a fierce disruption. For us, a man about the house was a rude novelty. This kind of man was utterly alien. He took up space: his massive frame, his odour, his clipped conversation, how he grazed, the way he feasted on oxygen. Here was danger and we loved it.

But there was another kind of danger elsewhere. No matter what technical trickery Mum got up to, the phone calls kept coming. Dead phones were strewn about the house like so many triggered rat traps. Each a delivery system for some poisonous threat.

‘Your take is my take. I’m coming  to collect.’

For all his swag and menace, Nitro O’Nitro was beginning to fall short of Mum’s expectations. She needed this problem solved tout de suite as it was chewing on her craw. Mister Nitro absorbed her verbal buffeting with a benign face, radiating stillness while his dark machinery ground out its work.

Of course, this absence of presence infuriated her further. At the end of one particularly stroppy session, at the end of a two-message day, I watched, cast, as she attempted to rake his face with her French-tipped, blood red, acrylic nails [$A75]. He batted her off fly-swat, turning the rage into a dance they both committed
to happily.

‘I’ve got this,’ he offered as they Fred Astaired around the kitchen and out into the warm summer’s night.

Stranded. Unable to move. I watched her phone gyrate across the granite bench top [$A2050 per square metre, if you’re paying].

Mum flew through the backdoor, picked up the phone and read the message:

We all did well at school. Well, schools actually. I went to twelve. The girls, more. Each time the bills reached a critical mass, Mum would manufacture a dispute with the current educators and storm out, withdrawing her children immediately! Didn’t make much difference to us as we all met and surpassed the milestones authorities expected of us.

Only Lindy-Lou and I continued our haphazard encounters with the school system. Chrissie,Rob and  Myra had moved on and were dipping in and out of a university education by the simple expedient of attending lectures in subjects that interested them, without going to all the bother of registering and paying fees. In the meantime, we were all eager participants in the family business.

Friendship groups were alien to us. The girls relied on each other while I gained a reputation as a bit of a loner with a quick temper and fast fists, should any innocent have the temerity to test my isolationist’s resolve. Probably not very healthy. But then, the security of ‘the firm’ meant that outsiders were not welcome.

With Nitro O’Nitro’s breaching the walls of our enclave, a new paradigm had entered my world and I was beginning to like it.

On reflection, he arrived at a time of my life when I was gagging for a role model. My sly and wily mother offered much, but there are certain things only a man can impart. I wasn’t sure that Mister Nitro was such a good choice, but he was all that I had.

O’Nitro’s worldly insolence rubbed off. His jailhouse tattoos didn’t. The triangle of three dots I copied and etched into the skin separating my thumb and forefinger announced ‘mi vida loca’ [my crazy life]. This was low bunk stuff and had O’Nitro shaking his head at its naivety.

‘Bad choice,’ he told me, while grabbing my hand and the ballpoint pen nib I used to announce this faux rep.

He joined the dots into a pyramid and hacked an eye into the centre.

‘This tells you I am watching. Always watching. Don’t fuck up!’

Mister O’Nitro didn’t want me in his gang. He was about right for thugs. He thought I had enough ‘head juice’ to skip the low side of the road and go straight to Doing Something Useful With My Life. Powerful stuff when delivered by a taciturn giant with wall-to-wall shoulders.

But was it powerful enough to trump a lifetime of following Mum down through the cracks?

THE MEANINGS OF THINGS #20

THE MEANINGS OF THINGS #19