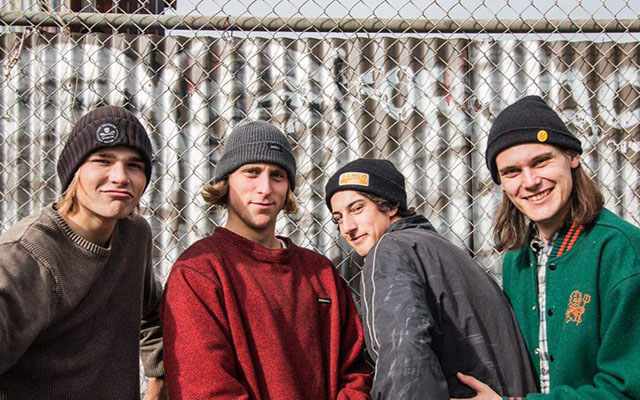 Apparently the lead singer was wearing an old shirt that said something along the lines of a ‘washed up wizard’ printed on the front, when the young disciples of psych-rock began referring to older music lovers they’d see at gigs as ‘washed up wizards.’ They then claimed the name as their own.

The majority of them washed up from the ocean along the coast of Victoria into Melbourne, so the name is both psychedelic and fitting. The Washed Up Wizards are comprised of Nelson Wilcox (lead guitar) Zane Searle (guitar and vocals), Benny Sparks on bass and Aiden Lewis on the kit, who is affectionately called ‘Dossy’.

Dossy happens to share a birthday with Jimi Hendrix, and is solid, compelling and in the pocket – but perhaps Dossy’s motto “play for the music, not against it”, is what creates tasteful dynamics to their psych-rock sound. Dos says that genres are becoming more and more fluid now, “Even now the boys have been dealing with microtones and straying away from 4/4”. Zane Searle smiles humbly with a pick in his teeth and tells me that their song ‘Earth Mother’ revives psychedelic themes of being deeply concerned and disturbed by how man has treated our planet.

The ‘wizards’ aren’t just surf rock, they compose melodic hooks and spacious Pink Floyd-esque chord progressions. They include just enough fuzz and grit to jolt you awake, blended with flowing structures like a classic Silverchair tune. The wizards never took their dad’s old record collection for granted, and just like the effects of a good psychedelic, they feel as if they become younger but more inquisitive when they band together.

The Washed Up Wizards are set to finish their third year of a Bachelor of Music at Victoria University this year, and are hosting a marathon of live bands to fundraise for Australian Wildlife at Kindred Studios in Yarraville on August 14. Come by and support live music in the west, and enjoy a plethora of local bands!