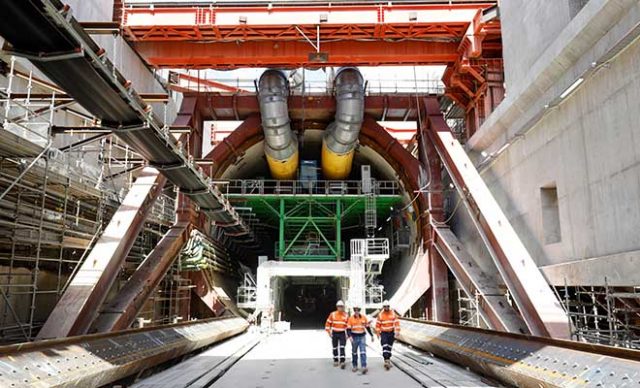 The first Tunnel Boring Machine (TBM) on the West Gate Tunnel Project is making good progress as it digs the four-kilometre outbound tunnel from Footscray to the West Gate Freeway, underneath Yarraville.

The TBM, named Bella, will be working 24 hours a day, seven days a week for the next 18 months to dig the tunnel that will provide another way to get from the city to the west.

The project’s second TBM, who has been named Vida, will be embarking on her journey shortly to build the 2.8-kilometre inbound tunnel.

The project is using two state-of-the-art TBMs that were custom designed and built to suit ground conditions in Melbourne’s west and are the biggest TBMs in the southern hemisphere.

While the TBMs bore 27 metres underneath Yarraville to excavate the new tunnels, a crew will be working to build the road surface and install electrics, ventilation, and safety systems.

To respect tunnelling tradition, our first TBM is named Bella, after Bella Guerin – a Williamstown local who was the first woman to graduate from a university in Australia in 1883. Digging our 2.8km tunnel is TBM Vida, named for Vida Goldstein, who was a Melbourne-based campaigner for women’s rights and established the right for women to vote and stand for election.

When complete, the twin tunnels under Yarraville between the West Gate Freeway and the Maribyrnong River, will provide an alternative to the West Gate Bridge and slash travel times to and from the CBD.

While it marks a momentous achievement for the project, a substantial amount of work has already been achieved across the project to get us to this celebratory milestone.

Works have progressed significantly across all areas of the project, including:

Opening to motorists in late 2025, the West Gate Tunnel Project will improve connections to Melbourne’s west, the CBD and Melbourne’s ports.

To celebrate the start of tunnelling, there will be a community event held on Saturday April 9 from 10am to 3pm at the West Gate Tunnel Project Info Centre at the corner of Whitehall Street and Somerville Road. It will be an opportunity to indulge in delicious food from inner-west suppliers, learn more about our TBMs with engaging family-friendly activities and entertainment for the whole family.