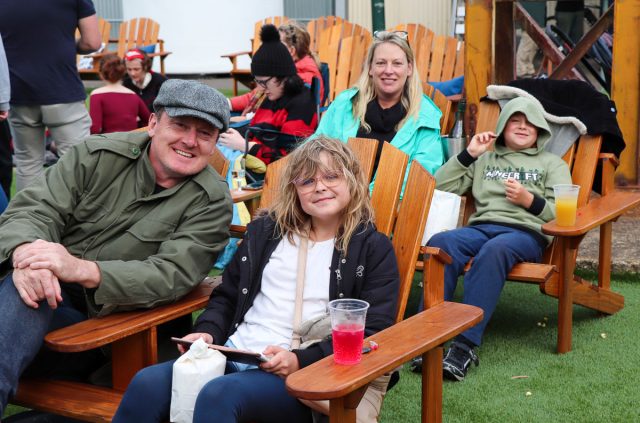 If you’re a bit like Matt Damon in The Martian – you know, been living on a rock millions of miles away, then you may not know that Sun Theatre have now opened up at Seaworks in Williamstown. Derek Green recently chatted with The Sun’s Mike Smith to find out more…

With your offshoots in Bairnsdale, Bright and the continuing efforts in Timor Leste, we shouldn’t be surprised that Sun Williamstown has appeared – how did it eventuate?

We had done some pop out screenings in Williamstown before, but we’ve been keen on the idea of cinema at Seaworks for about 10 years. We decided it was time to up the ante and set up an installed outdoor cinema rather than a pop up. We finally got the go ahead to proceed just before Christmas so spent the next few weeks making the furniture, screen and equipment over the next few weeks at our workshop in Little River. It’s such a cool industrial waterside site with great historical significance, but we softened the space with features such as eco- water free grass (!), planter boxes and overhead festoon lighting, with the best view of Melbourne laid out right across the water.

So for newbies like me or people wanting to check it out, what’s the drill?

There are three choices of seating – book a Cape Cod double chair for a couple, a bean bag down the front or BYO chair on the grass. Bringing along a blanket or a jacket is always a good idea when you live in Melbourne! We also have a Sun kiosk stocked with our beloved choc-tops and popcorn, while the Pirates Tavern is open serving drinks.

Who was instrumental in setting it up and making the space work?

It’s been a passion project for me for a while so I drove most of it. I’ve lived in Willy for over 20 years, and Seaworks is where I finished my seaplane circumnavigation back in 2015. But after our cinemas being closed most of the year, we needed some financial help to be able to set this up – we had time for ideas and building things, but have been pretty cash strapped – luckily we had great support from Hobson’s Bay City Council, with their Business Has Heart initiative, plus the State Government outdoor grants and a sponsorship from Scotchman’s Hill winery. Janet Dawes and Katy McMahon at HBCC in particular were just champions in their support. 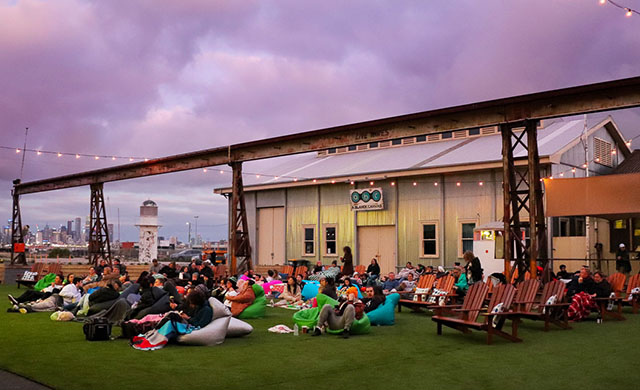 Being an outdoor cinema concept, will it run all year around?

At this stage we will run through to April… but we’d love to find ways of keeping it going… stand by!

How will you handle inclement weather (or chilly nights?)

With so many great people attending the sessions, and such a high proportion of Westies, if we see inclement weather coming we will form a circle, cross our legs, open our arms to the heavens and collectively chant “Omm”, surely that will do it…. failing that, if we have to cancel due to weather we will advise via social media and contact ticket holders directly – we simply refund back to people’s accounts if we can’t proceed.

What happened to the Pop-out cinemas like the one at Footscray’s Maddern square – might these happen again?

The last vehicle we built for the PopOut cinema is currently in the NT travelling between communities. This year’s focus has been on getting the Shore at Williamstown up and running, but our next project is to turn a double decker bus down in Bairnsdale into a portable cinema!

Any other expansion plans?

We are always thinking about new ideas – stay tuned 🙂

Sun Theatre Williamstown is at the Seaworks Maritime Precinct, 82 Nelson Place. For movies and session times, head to sunwilliamstown.com.au