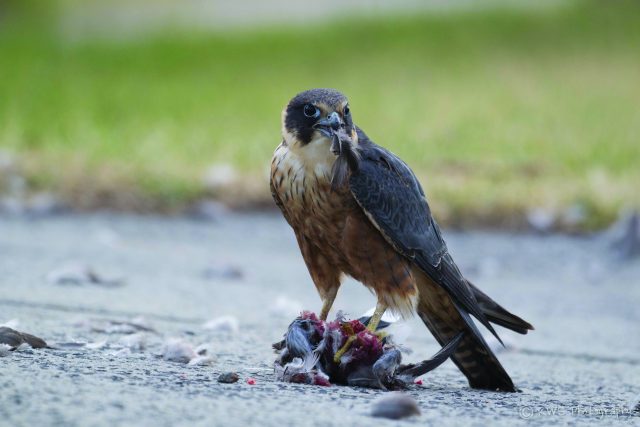 Being avid birdwatchers, or ‘birdy-nerdies’ as we’re sometimes called, my boyfriend and I are always on the lookout for our feathered friends in the sky. The variety of birds we spot in our backyard and local suburban streets can be quite astounding… anything from tiny Silvereyes and bright blue Superb Fairy-wrens to the sleek, hovering Black-shouldered Kites.

You can imagine our delight when driving home along The Avenue in Sunshine West we saw an Australian Hobby on the pavement! Our glee quickly turned to horror as it stumbled onto the road and into the path of an oncoming car. It narrowly missed being run over and fluttered to the middle of the road. I stopped the car and turned on my hazard lights as it crossed the road in front of me and headed into the off-lead dog area. Michael grabbed his jacket and jumped out of the car to catch it, while I politely gestured to the cars waiting behind me who had started beeping their horns. I could see three dogs running up to Michael and the Hobby, but I had to move the car, so I wasn’t sure if he’d be able to catch it in time. I parked the car further down the road and few minutes later Michael proudly arrived with a jacket full of Hobby.

Australian Hobby’s are a beautiful bird of prey with powerful claws and a hooked beak. They’re agile fliers and usually catch their prey in the air, hunting small birds, bats, insects and also mice.  In fact, Michael had recently witnessed this first hand just a few streets away when a Hobby hit a Spotted Dove in mid-air. It proceeded to eat its meal in someone’s driveway and stuck around long enough for Michael to run home and return with his camera to capture the scene. Could this be the same bird as the one we just rescued?

Michael carefully opened his jacket to take a peek. We couldn’t see any obvious injuries but it seemed to be holding its wings a bit weirdly. Once home, we got a cardboard box out of the garage and punched some holes in it.  Michael gently unwrapped the Hobby, keeping his fingers well away from its beak, and placed it in the box. The bird let out an ear-piercing SCREEEEEEECH!!!!!! I don’t know who was more scared, the bird or us!

Having rescued birds before, we knew what to do:

The Emergency Response Operator asked some questions, then recommended taking it to Hobsons Bay Vet Clinic where a Vet Nurse called Wendy specialises in rehabilitating birds of prey.

The vet anaesthetized the Hobby, x-rayed it to check for broken bones and also checked for bleeding behind the eyes which can happen after a concussion. There were no problems, but the bird still couldn’t fly properly so Wendy kept it in her specialised aviary at home to see how it recovered.

A week later, Wendy called to say the Hobby was ready to be released and we met her near the original rescue site to let it go. She told us the bird is female, which she can tell by the size, weight and wingspan. Apparently female birds of prey are always bigger than males but it’s not really known why.

As soon as the mesh box was opened, the Hobby jumped up and flew away, a little lopsided at first, but then gaining momentum and height, she finally perched on top of a power pole.

It was a special moment witnessing her release, knowing we’d helped a raptor recover so she was ready to hunt around Sunshine West again. It’s amazing the variety of birds you can easily spot in urban streets… keep your eyes peeled and maybe you’ll see her too!

For more info: Wildlife Victoria is a charity organisation that provides an emergency response service for sick, injured or orphaned wildlife. To learn more, become a volunteer or report a wildlife emergency visit www.wildlifevictoria.org.au or call 1300 094 535.

To learn more about birds check out Birdlife Australia http://www.birdlife.org.au or get involved in the Birds in Backyards program: http://www.birdsinbackyards.net