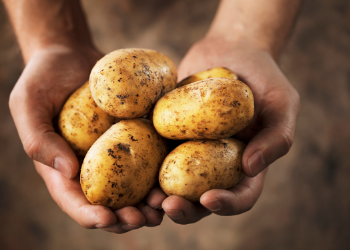 With faces and eyes and a skin tone like every human colour across humanity, the potato resembles us the closest. It by far yields the most calories per acre of any crop (9.2 million); higher than maize (7.5 million), rice (7.4 million), wheat (3 million), or soybean (2.8 million).  The potato is from the nightshade family, able to grow in most places on earth, including deserts.

Until the potato was introduced to the human diet, we could not inhabit mountainous areas like Switzerland, Nepal and the Andes all year round. In fact, potatoes fuelled much of humanity’s crisscrossing of the oceans in search of new worlds. They were on Captain Cook’s ship when he sailed for Australia and New Zealand. And guess what was the first crop grown in space?

The vegetative and fruiting parts of the potato contain the toxin solanine, unfit for human consumption. Normal potato tubers that have been grown and stored properly produce glycoalkaloids in amounts small enough to be negligible to human health. But if green sections of the plant (skins and sprouts) are exposed to light, the tubers will accumulate a high enough concentration of glycoalkaloids to affect human health.

First cultivated in Bolivia and Peru 8 000 years ago, the potato was taken to the Canary Islands in the 1570s then Spain, and later to northern Europe. The potato quietly changed the world everywhere it went by becoming a cheap and nutritious supplement for the European lower classes. This meant that a whole continent was no longer at the mercy of the failing grain crops and gave rise to the food secure societies of farmers, labourers and soldiers. This was halfway through the 17th century, laying the basis for the labour forces that drove the industrial revolution after both world wars.

Potatoes have even been used in nursery rhymes to teach children to count and of course, the Poles turned them into vodka. Undoubtedly, potatoes will be a festive table staple this coming Xmas, so make sure to have a bit of a variety.

There are so many versatile ways of using potatoes for your Xmas feast. All available at the Slow Food Melbourne Farmer’s Market (22 Dec).

Varieties and their use

Kipfler: Dense waxy potato with a buttery flavour, great for boiling, steaming, potato salad, roasted and excellent for the barbeque.

Dutch Cream: Similar to the Nicola, full of flavour but makes a creamier mash.

Russett Ranger: Similar to the Russett Burbank but a chunkier shape.

Do not store potatoes in a plastic bag or the refrigerator, as it deteriorates the quality and complicates the sugars and starches. If a potato is green, it is best to discard.

Potatoes that are sprouting are still fine to eat, just rub or peel away the sprout, it just means the potato is getting older or has been exposed to heat.

Potatoes will live happily in a cool, dark airy environment. A paper bag, a cardboard or wooden box with newspaper or lid on the top will do just fine.

Happy festive season and see you in the new year.

FROM POISON TO STAPLE: THE STORY OF THE TOMATO IN ITALIAN CUISINE