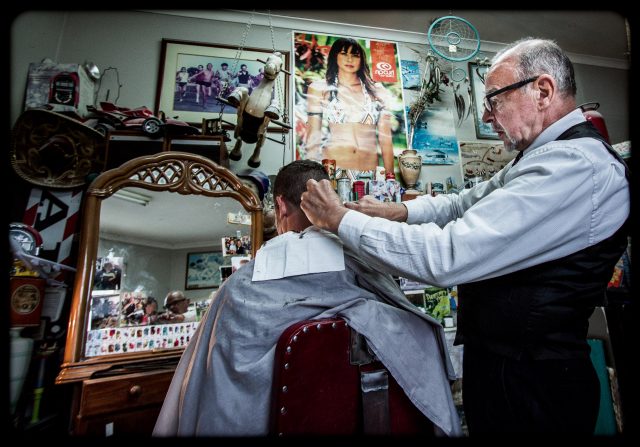 There aren’t many ‘men-only’ places left in this city. Apart from men’s toilets, a barber shop seems to be the only likely place you will find five bearded men sitting side-by-side, not saying a word to each other on a Saturday morning.

I’ve always found barber shops mysterious. As a female, I don’t really need to step foot into one, especially as I have a gazillion hairdressers on my door step. But there is something so intriguing about a barber shop. They’re so old school, so classy, so charming. And nothing has had me more intrigued then Doug Howie’s bright yellow barber shop in Seddon.

I’ve got an excellent excuse to visit the barber on this rainy Saturday morning. I’ve got a two year old son with a feral blonde mullet sitting on top of his flannelette collar. It needs a chop. I wait until 10am to head to the barber as I just expected most places open at this time. Not Doug. He’s open from 7am until 1pm on a Saturday.

When I arrive I’m struck by the scent of masculinity: I feel like I have stepped into an Archie’s comic book. I can smell my grandpa and Bryl Cream. It’s really comforting, but so incredibly manly. There’s already three men sitting in the shop on a 1960s tartan lounge surrounded by hundreds (literally hundreds) of vintage toys: a red ride-on car, a nineties neon Simpson wall hanging, a wooden Tiki mask, plenty of books on steam trains, and right smack bang above the central mirror, a poster of a powerful eighties woman donning a hi-cut bikini brief. I can’t take my eyes off her thighs. My son points to the poster and says ‘mummy’. I say, ‘I wish’. The seated men laugh, then look back down at their copies of the Herald Sun.

Doug is dressed just like you imagine a barber should be dressed – in a waistcoat and shiny shoes.  He’s superb when it comes to kids and cutting their hair. My son sits on my knee in front of the mirror which is covered with photos of Doug’s grandson Lachlan. He’s about the same age as my son and you can tell he’s the apple of Doug’s eye.

Are the toys for his grandson? “No, they are just my little world. I’ve been collecting them for years. They’re not for anyone else really, just for my enjoyment.”

Doug has been cutting hair in the area for almost 50 years. He completed his apprenticeship with a Swiss barber in the City, who he says taught him everything.  “He could have sacked me a hundred times, but he was too good to me. I owe him everything. I’ve been very lucky working in this industry.”

Doug seems to have cut everyone’s hair, but the most famous being The Ink Spots, an African American group who rose to fame in the 1940-50s. They were touring Australia in the 1960s when they came across Doug’s hair cutting skills while he was working at a salon in Bourke Street. 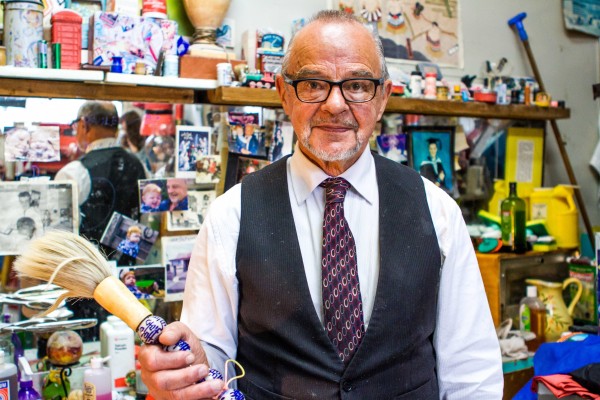 Working as a barber in a salon on Somerville Rd, as well as in Newport and now Seddon, I’m interested to know what changes he has seen in the area over the past 50 years.

“There used to be a whole lot of factories and warehouses in the area, so I always had customers seeking short back and sides. When The Beatles came into fashion, barbers almost went out of business – not because blokes were growing their hair, but because unisex salons popped up. I’ve been very lucky, people always need to get their hair cut. Short back and sides has kept me in the business for a long time.”

Recently Doug was told that his lease was up and he would have to move out. The iconic yellow building would be turned into apartments.

I ask the blokes sitting on the tartan lounge why they keep coming back. The tough looking guy reading the train book quickly responds: “Doug’s been cutting my hair since I was five. My dad used to bring me to see him. He used to cut my dad’s hair too. It’s what he did and what I do.”

My son’s cut is complete. He has a little quiff, like Tin Tin, his hair parted with a comb on one side. I think it’s the first time he’s had any product in his hair. His head smells like California, coconut, rum and Old Spice all rolled into one. He’s become a tiny man.

At $10 for a kid’s cut – short back and sides – I will be tracking down Doug’s new barber shop. At the rate my kid’s hair grows, I hope to be seeing Doug once a month for the next thirty years.

Doug Howie’s Barbershop is located at 65 Williamstown Road, Seddon. You can’t miss the bright yellow corner building. Get in quick as it won’t be there for long.