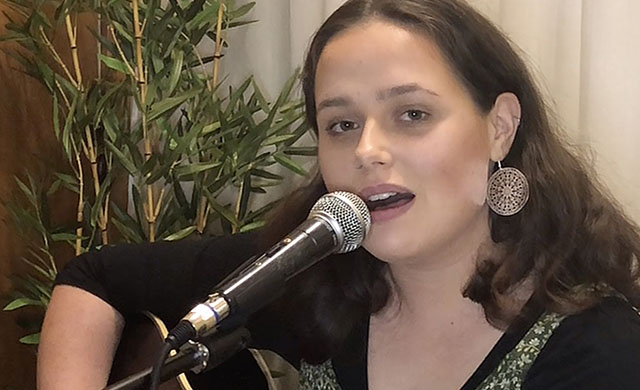 Maidstone’s Maddie Jackway is a Victoria University Bachelor of Music graduate and singer-songwriter. She took part in the Art & Industry Festival’s ‘Song Series Project’, where VU music students created songs about local industries. The Westsider’s music writer Kate Skinner recently caught up with her and they Zoomed through these questions!

How does living and studying in the west inspire you creatively and musically?

I absolutely loved studying music at VU – graduating was one of my proudest achievements. Living in the West you get the hustle and bustle of being close to the city but also you are surrounded by real people who believe in the value of hard work, honesty and integrity. I feel like I can be myself and this definitely makes me comfortable in creating and performing my own music.

You released your EP in May, titled “What Is This Freedom?”. Can you tell me a bit about it?

The project started as extended work in my final year at VU and I decided to release it as my debut body of work. The name of the EP encompasses the feeling of freedom when I realised that musically and creatively the world was my oyster. The four songs were written over 3- 4 months then recorded and produced at Kindred Studios. I guess you could say it’s a concept EP influenced by elements of chromesthesia; each four tracks are named after a colour and they explore a particular human emotion that I personally link to that colour.

You like to write songs about what it means to be human. What are your thoughts on how humans operate, interact and express emotions and how does this translate into your music?

I think humans try so hard to hide so many different parts of themselves for fear of being disliked or ostracised, but are actually just a part of being human. I use my music to write about things that I would never say to someone else. It is cathartic to me, and I hope that when people listen to my music they are comforted by the fact that there is someone else who has those same feelings.

You entered the ‘Song Series Project’ which was a collaboration between the Art & Industry Festival and Victoria University where music students created songs about local industries. Why did you choose to be a part of this project? Were you supported or inspired by any local musicians?

My university lecturer asked if I wanted to be a part of the project. I was really interested to see how we would be creating songs out of industrial-based source material, and really wanted to push myself as a songwriter. I came away with a new appreciation for the industry that exists in Melbourne’s western suburbs. I was super lucky to have the mentorship of local professional musicians Peter Farnan, Jane Bayly, Sherry Rich and Rusty Berther who were really wonderful and open in sharing their creative processes.

You wrote two songs for the Song Series Project, ‘Homeward Bound’ and ‘Sheer Lines’. What was the creative process you went through to create ‘Sheer Lines’?

I really wanted to write songs that could be listened to away from the context of the festival while also still containing lots of the source material in them. When the Song Series group toured Blunts Boatbuilders in Williamstown, I scribbled down anything that stood out to me. The combination of the passion and poetry in the way Greg Blunt spoke his little nuggets of wisdom mixed with the historical ambience and sensory experience of the boat shed inspired me. I settled on the idea of a conversation between a past generation boatbuilder and current boatbuilder, and after workshopping with the songwriting mentors I created ‘Sheer Lines’.

Homeward Bound’ is about Daniel, a young man who lives in Yarraville and got a tattoo of the Westgate Bridge with the words ‘Homeward Bound’ on his leg, as a tribute to the western suburbs. How does the story of a young man and his tattoo transform into a song? Why did you decide this as your song subject for the project?

Maddie Jackway’s EP ‘What Is This Freedom?’ is available on all streaming platforms. She will be performing her two songs ‘Sheer Lines’ and ‘Homeward Bound’ live at the Song Series concert online on Friday 27th November.

The Art and Industry Festival is happening from 20-29th November online.

The Westsider’s resident music reviewer, always cycling around the inner-west searching for the best local artists and local craft beers.