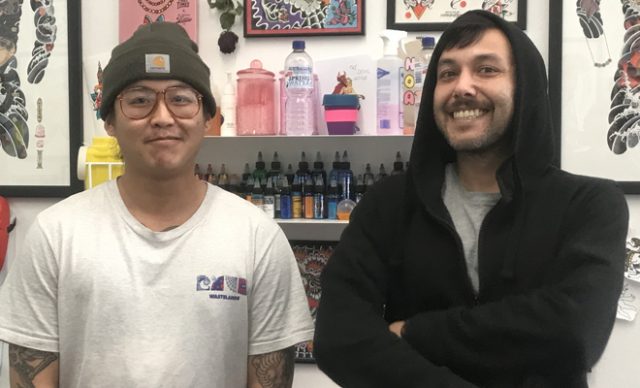 When I was a kid, the only folks with tattoos were the bearded bikies smoking outside the local pub. These days, however, it seems everyone from baristas to biostatisticians sports some sort of permanent marking. While not been brave enough to get inked myself, I was curious what life is like at the other end of the tattoo needle.

Palmer and Ted from Anderson Street Tattoo in Yarraville are the kind of guys who immediately put you at ease – a good quality in someone who will be permanently tattooing your skin. Both share backgrounds in the visual arts, who gradually made their way over to the wonderful world of tattooing.

“I’ve always been really interested in art and wanted to do that as a career,” says Palmer. He had a roommate who was doing a tattoo apprenticeship and found himself interested in the tattoo field. “All the aspects of the craft were really attractive to me. It seemed really cool.”

Ted also found his way into a tattoo artist career after finished studying graphic design at RMIT. While doing business cards for Palmer’s tattoo business, he started hanging around the studio and fell in love with tattooing.

While both guys confess they absolutely love their careers, they also admit that it is a very demanding profession – both physically and mentally. “It is very physical in the back and shoulders,” says Palmer, “And (doing a tattoo) takes a lot of mental energy. You are in a permanent state of concentration, and it can be draining.”

The current popularity of tattoos has also led to an increase of tattoo artists – of varying levels of quality and commitment. According to Ted, “there’s a lot of glamour around tattooing at the moment. And lots of people getting into the industry because they think it is quick cash and easy work.” Palmer agrees. “(Tattooing) is not something for someone who wants to just do the job and go home.”

Are there any tattoos they would refuse to do? Hate symbols and phrases, they both agree. However, they are both willing to work on tattoos of somewhat niche taste. Ted says “A part of opening up the Anderson Street Studio is that we accept people. And same thing goes for what they want on their body. At the end of the day, we don’t categorise things as “tacky.” To each their own!”

The tattoo artists encourage all people considering getting a tattoo to do lots of research into their intended meaning and symbols. Ted especially encourages people to shop around, and to understand the artist and their creative processes.

While I did not end up getting a tattoo at the Anderson Street Studio, these positive and thoughtful tattoo artists did leave a permanent impression!

“So What Do You Do?” is an ongoing series exploring unusual careers in the inner west of Melbourne.

THE HEART OF YARRAVILLE IS STILL BEATING