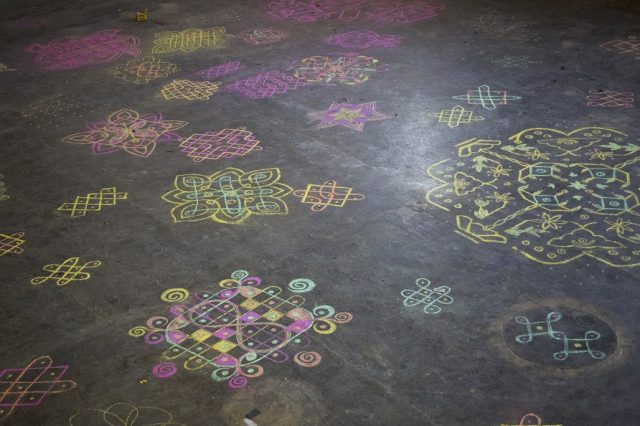 With so much going on in the west on the weekends, I was pleased to find an event I could go to during the week. The advertised words ‘Chalkstone’ and ‘Rangoli’ were both unfamiliar to me so I set off on an adventure to explore what they could possibly mean. With directions in hand, and curiosity driving me, I found my way to Pipemaker’s Park, Maribyrnong. Turning off a busy road opposite Highpoint Shopping Centre, I found myself immediately winding down to the rhythms of what felt like country rather than city. Parking, then walking, I made my way through a eucalyptus scented landscape in search of ‘The Living Museum of the West’ and the bluestone building housing Chalkstone. Up a long and steadily rising path, dodging path resurfacing equipment and sturdy looking workmen in orange vests, my enquiries found that they had not heard of the bluestone building, so onward and upward I went in full adventure mode, until I reached a place where the park opened out into a grassed picnic space. Hemming one side of the opening, the Maribyrnong River flowed towards Port Phillip Bay. On the other side, an assortment of buildings revealed The Living Museum of the West and my current grail, the bluestone building.

A huge, closed, corrugated roller door cut into the side of the bluestone building housed a smaller open door. Bending to enter the building through the smaller door I found myself in a large, high-roofed space. This strange juxtaposition of entering through small to large left me feeling a little like Alice in Wonderland.

The interior of the cavernous building further enhanced the ‘Wonderland’ feeling, as enormous metal trusses seemed to hang rather than support the high roof overhead. Sturdy, white-painted bluestone walls accentuated a sense of enclosure with the strength and stubborn resolve of an aged building determined to remain relevant. And relevant it is as a magnificent art space of unusual qualities. Not the customary highly lit art experience, rather a lack of windows caused a dimness to fall over a beautifully patterned Rangoli covered floor. The geometric drawings, interrupted occasionally by piles of coloured chalk, spread across the cement floor like carpet.

Jane O’Neill, a freelance curator, had been coming to the bluestone building over the month of March with her coloured chalks and patterns to introduce the art of Rangoli to the community. Jane became interested in Rangoli after receiving a card from a friend about ten years ago. As she does a variety of community based participatory activities, she felt that Rangoli would work well as a community art project, as its simple dot pattern is easy to execute.

“It was super to have the opportunity to work in the Bluestone Building”, she said.

The project is a celebration of the Indian art of Rangoli (also known as Muggu or Kolam), the delicate symmetrical patterns traditionally drawn in domestic areas during festivals and celebrations. Jane teaches how to draw these intricate patterns according to the simple formation of a grid. The result is a large scale floor work perfect for the bluestone building.

As I exit Wonderland through the small door, I leave behind an Indian woman and her children chattering excitedly with handfuls of chalk as she introduces them to an art she is familiar with but one that they have never known as children born in Australia. I hear her say she would draw Rangoli outside the front door each day to greet the morning. I envy the simplicity and beauty of such a tradition

Walking back to my car I feel the inevitability of distance growing between my Wonderland experience inside the bluestone building housing a tradition of another land and the frenetic busyness of the drive home that I will find outside Pipemaker’s Park.

Jeanne Gabrielle is a Yarraville resident whose many interests include writing.