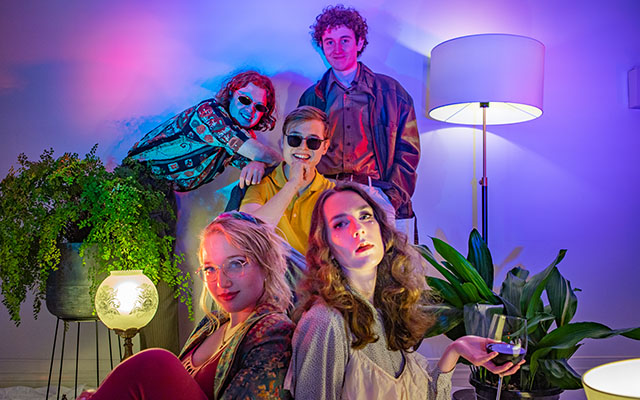 Peggy Hills told me two years ago that we were going to call our new instrumental tune ‘Precipice’, just like the edge of a cliff face. She said her lyrics described the ‘warps and worries’ running through her mind, and that there was never going to be a ‘perfect time’ to do anything. So now was a better time than any to take the plunge. The conclusion of the song features our harmonising vocals layered beautifully, singing almost manically
“ju-ump,we gotta jump!”

At our best, Meraki Minds is a five piece Indie pop band from Ballarat, who have created a perfect dichotomy of dreamy guitars and harmonious female vocalists on top of energetic grooves. We have brought our tunes out of the band room, expanding onto the stages of regional festivals, and now we hope that Melbourne’s music scene can be our new stomping grounds. Myself and our guitarists Sam Bailey and Pete Wynen are currently in our third year studying a Bachelor of Music at VU, and reaping all the benefits from the creative hub that is Kindred Studios.

Other days I feel like we are extremely creative but disjointed individuals with meandering ambitions and varying work ethics. Peggy and I were looking to do nothing more ambitious than to pass our Cert IV in Music Performance as seventeen year olds at Ballarat High. I reckoned that jangly pop anthems were going to get us through with flying colours, while Peggy thought that Meraki, meaning to do something with your heart and soul, fit as a band name. Fast forward two years later and Peggy is almost in the air to the right of me, on one of the stages at Ballarat’s Spilt Milk Festival 2019. We have released an album and five singles with Tommy Faith, Executive Producer of Triple J Unearthed saying that “this has just the right amount of extra weird to make my ears perk up. I love the way you’ve produced your guitars and the layered vocals too. Beautiful and bouncy.”

We were in the middle of gigging and writing another album when imminent changes looming in the background thanks to COVID threw a big fat spanner in the works. As a consequence, we’ve been coasting for a while now, too scared to try to book gigs or dream bigger than a basic rehearsal every couple of weeks because there were no gigs or motivation to try. However, now in 2021 we have just created a ‘living room session’ video inspired by NPR’s Tiny Desk Concerts, and we are sitting on an album ready to begin tracking.

On our last sullen and almost forgotten Zoom meeting, Sam is preoccupied, and tells me that he feels that COVID hit us too hard. I think that insecurities about misunderstood ideas and musical identity are often at the heart of bands falling out with each other. But whenever I voice this concern, Meraki Minds assure me that “we already know what our sound is — it’s something weird, whacky and eclectic,” and I think it’s true.

If I could say anything to my bandmates right now, I would tell them that we’re on the precipice at the moment, and that creatively, we are onto something in how we are developing our dreamy stage presence boppy new tunes. The songs are ready now, so we should just take the plunge and invest in that music video we were talking about, and just schedule some dates for recording!

Meraki has been on my mind since we played our first gig and we are not going to forget about what we have. These songs are our babies, and so is this project. Even now I am hopeful. To quote Peggy Hills back to her, “Jump! We gotta jump!”