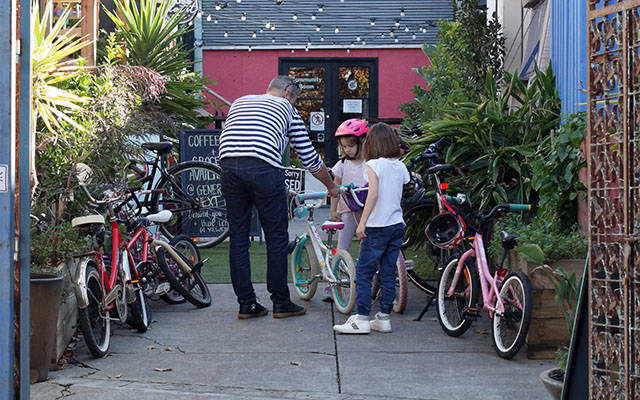 The western suburbs are filled with beautiful communities, with generous natures. The Inner West Community Bike hub was recently delighted to receive a donation from one such considerate group, the Footscray Church of Christ. With that funding the Bike Hub said they would provide a workshop to teach skills to their youth and congregation members on how to maintain bikes so they keep on helping others in need in their community.

In speaking with Pastor Jarrod Davies, who leads the community out at 252 Gordon Street, Footscray, he explained that this was the first year they had put aside a budget of $5000 specifically to think and act missionally. The guiding principle of the special leadership group was to focus on creation care, and caring for those in our community who may be struggling on the sidelines.

It was critical that youth formed part of the leadership group and were involved in the decision making. Two girls in year four and three adults came together; Maya, Lydia, Gin, Emma and Jarrod. The group made a number of suggestions, like the Bike Hub, and then did further research to see that it fit with their mandate of creating and helping people in need.

So to their Leadership group the Bike Hub made perfect sense, as it basically does that. It creates new bikes from old, and then gives them to people who really need them. Secondly, Jarrod explained, that bicycles played an important role in helping people independently and actively access places, as well as reducing pollution on the road.

The Footscray Church of Christ also allocated money towards: Cultivating Communities (cultivatingcommunity.org.au/about-us), Friends of Kororoit Creek, (facebook.com/friendsofkororoitcreek/), Love in action and Reaching out in the inner west (facebook.com/groups/252482409442971/).

Athena Thompson is a professional problem solver by day (business consultant at www.TechLever.com.au), and supreme question asker by night. Exploring Melbourne’s west one curiosity at a time.