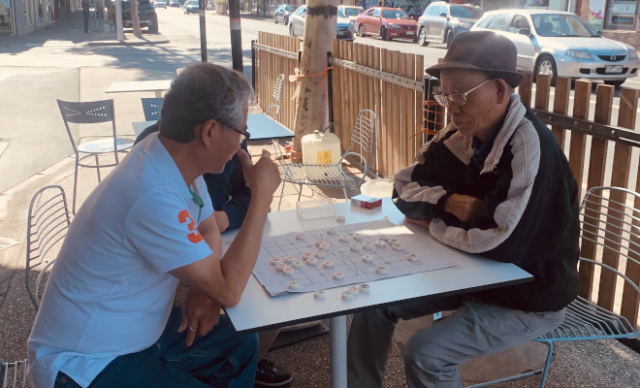 Towards the end of Melbourne’s last lockdown, I started playing mah-jong, for the first time in over a decade. As I rediscovered the joys of the chic carved tiles, I started asking questions about the game and was surprised by what I discovered.

My mother is Malaysian Chinese, but I didn’t learn to play mah-jong from her. It was my father who taught me, and he’s Anglo-Australian and was raised in the western suburbs of Melbourne. I’d always assumed that he learnt in Malaysia, where he worked for two years as an Australian Volunteer Abroad. To my astonishment, he told me he was taught in the Vicarage next to St Eanswythe’s Church in Altona!

The Vicar at the time was Reverend John Lawley, who’d migrated to Australia from England some years earlier. My dad wasn’t sure how he came to own a mah-jong set, but suspected Reverend Lawley may have bought it when his ship made a stopover in Singapore.

The Vicar taught the game in a very orderly way—he lined up the tiles people discarded in number order by suit—and my father was taken aback a few years’ later when he arrived in Malaysia and saw the exuberant chaos of mah-jong when played by the people who invented it.

The next surprise emerged when I looked into the history of mah-jong. I’d always fondly imagined it to be an ancient game passed down since the dawn of Chinese civilisation. Discovering that it was developed in Shanghai in the mid 19th century left me a bit crestfallen!

My romanticised image of mah-jong took a further hit when I learned the truth about the ‘honour tiles’. In English, these are referred to as red, green and white dragons respectively. I’d always been especially fond of the empty picture frame that symbolises the white dragon, as evidence of the Ancient Chinese sense of humour.

How, then, did these tiles come to be called dragons in the West? They were rebadged by an American engineer called Joseph Babcock, who popularised the game in the US and decided to add flavour by naming them after mythical creatures associated with China. In some mah-jong sets produced in Western countries, the usual carvings are replaced by carvings of actual dragons.

Unromantic though the truth may be, it’s interesting that a game played so widely and considered the archetypal Chinese game was developed so recently. The distinctive tiles—more fun than cards and way more pretty than dominoes—weren’t hewn from stone in a long-ago era before paper at all. They grew out of card games played in China since the 9th centry AD.

In fact, the Chinese were the people who invented card games in the first place, and the playing cards used today in the English-speaking world were based on Chinese decks brought to Europe five centuries later.

These days, anyone with a computer can gather four players and play mah-jong online any time they want. Convenient though this would be, I can’t see myself embracing it. For me, too much of the appeal of mah-jong is the feel and weight of the tiles, and the ritual of building walls from them and casting unwanted pieces into the middle of the table.

My father still has the mah-jong set he used to teach me, which he bought long ago in Malaysia. These days, he takes it out once a week when my children are over to do battle with their grandparents over tiles.

Their house is in Altona, not far from the house that was the Vicarage for St Eanswythe’s Church. Reverend Lawley moved on long ago, and would be in his eighties if he’s still around. Yet fifty-five years later and a few blocks to the north, the legacy of his mah-jong lessons lives on.