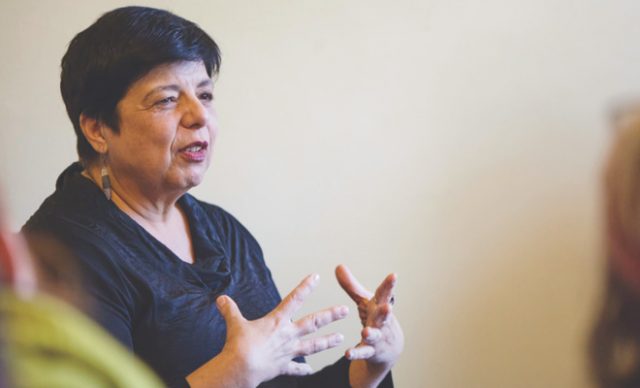 I met Enza Gandolfo on a wet and cold morning at Feedback Café in Yarraville. I’d just finished reading her second novel, The Bridge, when I volunteered to interview her for the Westsider. I found the book a moving exploration of responses to grief and tragedy.

Enza has spent her working life as a teacher, social worker, academic, and writer. I welcomed her willingness to open up about her writing and a need to explore issues of social justice through her work.

Enza enjoys telling stories from a female perspective. For this reason she was initially hesitant about writing a story about the Westgate, given its strong male history, built by riggers, boilermakers, engineers – careers that we usually (still) associate with the male gender. But she has a strong memory of the bridge collapse where many young men lost their lives, of the impact on her neighbourhood, and on the lives of the men’s families. Enza found herself unable to ignore the strong urge to tell the story of the bridge after reading papers from the Royal Commission into the collapse. An encounter with an Op Shop volunteer (and former construction worker) who went to work on the Westgate after it collapsed because he felt a responsibility to ensure its ongoing safety, confirmed her determination.

The Bridge follows the stories of two main characters – the first of Antonello, a former rigger on the Westgate, and Jo, a teenager who lives in the shadow of the Westgate in her grandparents family home. Enza carefully develops the two stories and for some time, they grow alongside each other, until finally meeting and intertwining in the most catastrophic of circumstances – a young woman’s death.

It’s Jo’s story that produces the most angst: her culpability for the death of her friend; the way grief produces a myriad of responses; and to Jo’s mother’s struggle to comfort her daughter when confronted with the truth of what has happened. Antonello’s story is more focused on awakening and the power of forgiveness. The two stories work together due to their shared basis in guilt – that ultimately under law we do hold someone responsible for tragic events, however not always to the same degree. You can feel the impact of Enza’s research of similar real-life accidents with similar outcomes in the strength of the characters she creates and their sometimes-visceral response to the tragedies. The Bridge is full of grief and hurt and was at times a difficult story for Enza to write. But the opportunity to write about the local area, and the way class impacts on people were strong motivators.

Again, Enza’s strong belief in social justice pushes through – her belief in redemption, in the fact that terrible things happen to good people, and that young people can choose recklessness over the safe path with sometimes catastrophic results. She sensitively balances the need to accept responsibility for our actions with an understanding that those in Jo’s situation must live with the consequences of their actions every day for the rest of their life, and this itself is a form of punishment.

Both stories carry a heavy sense of loss – of life, friendships, the future, of aspirations both real and imagined. There are moments of forgiveness and understanding, not always explicitly stated, but rather in gestures, both emotional and physical. These moments speak to our ability to pull ourselves out of our own grief and recognise a need in others, or to channel that grief into a practical response.

Enza writes stories she feels need to be told. Her key drivers are diversity of voice and her own experience of reading throughout her life. She has a clear commitment to telling and promoting stories that represent the full experience of what it means to be an Australian – across all classes, ethnicities, genders, and not just those from the mainstream. She wants to tell good stories that provoke conversation and dissent. I experienced overwhelming empathy for the characters and their tragic circumstances. This is a story for those of us who are interested in discovering the humanity within our own history.

Enza Gandolfo’s latest novel is The Bridge. She will be at the Williamstown Literary Festival on Saturday 15 June (Pathways to Publishing) and Sunday 16 June (in conversation with author and journalist Helen Pitt about her book about the Sydney Opera House).