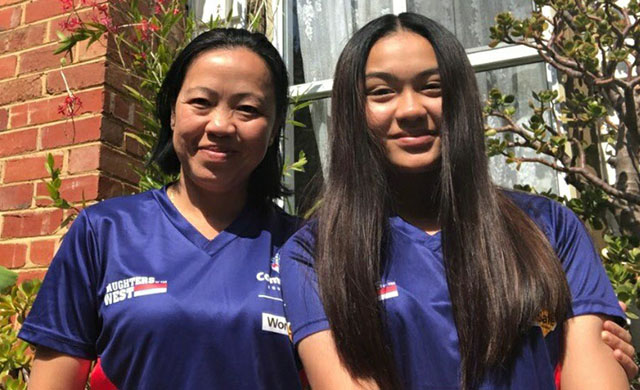 My name is Quyennie, thank you for reading my story. As a refugee, I came to Australia in late 1990. Life was so hard, I had to adapt to a new life by learning new language, culture, society.

In 1996 I moved to Germany after four year we decided to move back to Australia permanently. I remember the first AFL gear we have were two backpack, one was Geelong Cats, another was Adelaide Crows and I follow Brisbane Lion (I did not know anything about footy at the time.

I worked in North Fitzroy and people there supported the Lions). In 2007 we bought our first house in West Sunshine and my husband asked me to pick a footy team to support. We chose Western Bulldogs at that time because we live in the west but most importantly, the reason was, the club was one of the poorest in a league and we wanted to support a club that is an underdog.

Since I became a member, I started to learn more about the history of the game and the club. I went to watch training sessions to get to know the players (I went down to the club 3 times in a week in 2008 – 2010) it was then that I realised that I had made the right choice by following Western Bulldogs even though we lost more games than we win! My heart had fallen for the WB because I feel so welcome whenever I take my kids down to Whitten Oval. The players are all very down to earth and the WB staff was so friendly and I made a lots of friends at the club.

In 2016, we were so lucky to witness the Western Bulldogs winning a second flag. What can I say … I smile all day, all week, all month and still year later. In 2017 Western Bulldogs Community Foundation introduced the Daughters of the West program and I am was lucky enough to be one of the first participants of the program. I realised that besides footy, the club also run programs to engage the community and help people from all walks of life. Especially, with newly arrived people to settle into a new life in Australia.

The club also runs programs that helps with health and wellbeing and Youth Leadership programs to guide the youths to be better future leaders. I admired Western Bulldogs Football Club for the heart and soul they put into building a better life for people in the community. I learnt many things from the Western Bulldogs Community Foundation’s programs, such as, exercise to keep myself healthy, smiling more, forgive more to keep myself happy.

Thank you Western Bulldogs for giving me the opportunity to get involve in many aspects of the club and all the great friends I’ve made on the way. In this covid-19 time that interrupts our 2020 AFL season and Community Foundation programs, it is so hard for all of us to deal with. I wish all to be safe and keep supporting Western Bulldogs in both mentally and financially. I believe and I can’t wait to see our Football club get back out there stronger and better.