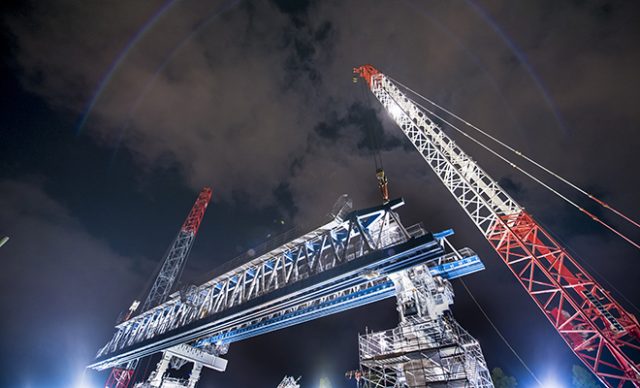 A huge road building machine is taking shape in the middle of Footscray Road, as works ramp up to build a new elevated road as part of the West Gate Tunnel Project. It’s impossible to miss the striking machine, which towers well above the barriers in the centre median construction site. Once fully assembled, the machine will be roughly 110 metres long, 12 metres wide and weigh in at 1,200 tonnes!

Last month the first pieces of the machine were lifted into place. These included the front supports along with two 60-metre long side trusses which weigh in at around 175 tonnes each. Further pieces will be installed to finish the machine and once fully assembled, safety and functionality testing will take place before operation begins.

The machine has a massive job ahead of it as it builds the road that will connect the new tunnels to the port and the city. Sitting atop support piers around 30 metres off the ground, it will lift individual concrete segments into place, eventually creating 15 kilometres of new traffic lanes running directly above Footscray Road.

Crawling back and forth to gradually build the road, the machine will place almost 1,600 pieces of concrete segments into place over a two-year period.

The West Gate Tunnel Project also includes building a new bridge over the Maribyrnong River to connect the new tunnels to the elevated road, and further to CityLink, Dynon Road, the port and the city.

Additionally, Wurundjeri Way will be extended and widened to create a city bypass taking traffic off Spencer and King Streets, with an extra lane in each direction and an extension north to Dynon Road.

Pedestrians and cyclists will also benefit from works in this section of the Project, with walking and cycling paths being created, including a new cycling veloway and bridges over Footscray Road and Moonee Ponds Creek for quicker and safer cycling to the city.

Read more on the full scope of work on the Port to City section of the Project at https://westgatetunnelproject.vic.gov.au/construction/port-to-city