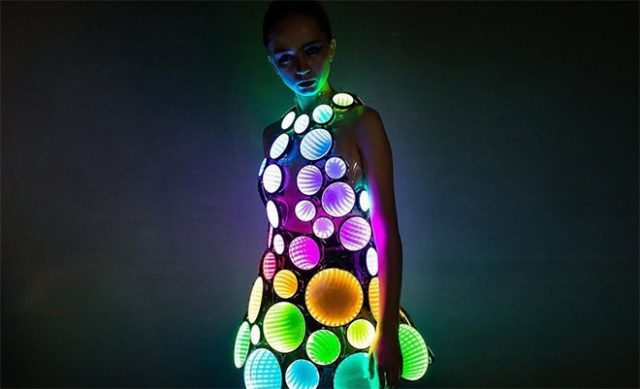 This month, we took a look at the way technology has developed over time to change and improve the ways fashion is manufactured – from textiles woven on the Jacquard loom, to ready-to-wear couture that is 3D printed. But what’s beyond simply using new technologies to make garments? How can technology help us to engage in a real dialogue with our clothes? How can it help us to make our clothes ‘smart’?

Recent explorations in wearable technology – or ‘wearables’ – have the potential to give some very literal answers these questions. Along with hoardes of fashion designers, artists and independent creatives across the world, tech companies everywhere are in the throes of developing textiles and garments that respond to the wearer – and of course, the giants are at the fore. Beyond step counting and heart rate monitoring devices, the usual suspects like Google and Apple are working on wearables that interact more intimately with the body, taking commands, supplying information, and collecting data through passive wearing and active gesturing.

While Apple is keeping quiet on the details of their recently lodged smart fabric patents, Google has been a little more forthcoming about their progress in the field. Paying homage to the man who invented the first mechanised, punch-card loom, Project Jacquard is one of Google’s latest explorations in smart textiles.

The project, in conjunction with Levis, aims to turn any type of fabric into a gesture-controlled surface, just like a tablet or smartphone.

Along with a cuff that is linked to a smartphone via bluetooth, the jacket’s left sleeve features 15 conductive threads that match different gestures to different commands, like playing music, asking for the weather, or answering the phone.

But it’s not just the tech leviathans who are doing really exciting things in the realm of wearables. Another much smaller company rending garments into objects that respond to and assist the human body is Loomia.

Helmed by American designer Madison Maxey, Loomia has just launched its H1 Heated Jacket – a thin wool garment that heats up with the use the company’s patented LEL (Loomia Electronic Layer). Maxey was first granted the opportunity to develop the LEL when she won the Thiel Fellowship, which awards USD $100,000 to ‘young people who want to build things instead of sitting in a classroom’. Since winning the highly coveted prize, the former Parsons NY student seems unstoppable. Her LEL – a thin, wire-free, hand-washable circuit board that can be integrated into textiles – is now being marketed to all kinds of garment manufacturers, who can use the invention to enhance existing designs without having to develop similar circuitry themselves. At this stage, the LEL is capable of heating, lighting, touch-sensing, and data-transmitting, so Loomia’s potential market is a considerable one. And while smart fabrics across the board aren’t without their issues – delicacy, reliability, washability, and even uncertainty around the safety of a piece as the fabric deteriorates over time like a ‘normal’ garment – the current capabilities of Loomia’s product already opens up an unquantifiable scope of possibilities for clothing companies that want to ‘smarten’ up their product.

‘Smart’. It was a loaded word before it came to denote a human-made object imbued with artificial intelligence. A synonym for words like ‘clever’, ‘brainy’, and ‘knowledgeable’. But in a time where we are only just coming to truly appreciate the value of emotional intelligence in every aspect of our lives, the word ‘smart’ is being reworked again. We don’t just want our intelligent devices to know how to do things, we want them to do those things in a way that feels ‘human’ – with warmth, sensitivity, and humour. If our technology is going to become such an intimate part of our daily life, we want it to act like a kind of companion.

‘Smart’ now needs to encompass wearable technology’s ability to perceive and address human feelings with emotional intelligence – in acting like a pet and comforting us in times of solitude, for example, or intervening in social situations when we need help to feel more relaxed. ‘Smart’ needs to remove what separates humanity and worn technology – bringing us together so completely that we blend.

Extract of a piece published on Medium. Read the whole article – fab9.com.au/community)