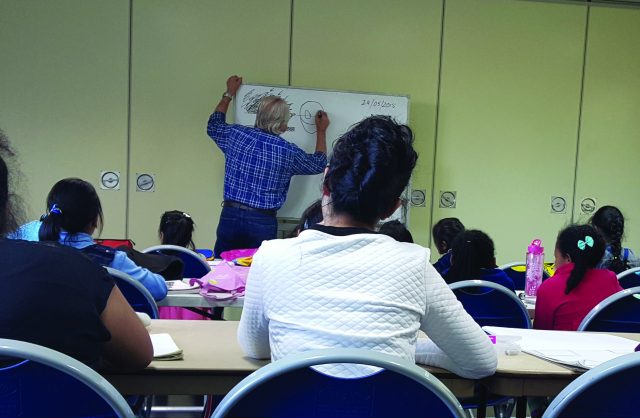 Kevin Handley is a 76 year old local artist originally from Sydney. He has worked as engineer and commercial artist in his life. He also helped his wife run a goat and camel export business to the United States for a period of ten years. He attended the National Art School in Darlinghurst and completed an engineering degree as well.

When he decided to move from NSW after retiring he went back to university at Victoria University and gained a teaching degree. He ran drawing classes out in Newport for a few years before deciding to finally settle in the Western suburbs.

In addition to the classes in the Western suburbs, classes are also held out at Ferntree Gully and Mulgrave areas, when Kevin and his wife are visiting their daughter and helping out with the grand kids.

Kevin describes himself as an illustrative artist and not so much an abstract artist. He says he enjoys drawing portraits and landscapes.

Kevin says he learns a great deal from working with the children and quite a number of them have a good talent.

Kevin believes the Wyndham City council appropriately supports local artist and promotes an art culture within the community. Kevin entered the Werribee Art Show twice and was successful in selling a piece, and also took out Best Local Artist one year.

As a local artist he says he is happy with the council’s and community centres’ effort in seeking out feedback from artists in the community on how to best improve and cultivate the art culture within the region.

Kevin has seen many of his student’s progress to the Victorian College of the Arts, which he says is a wonderful thing to have seen.