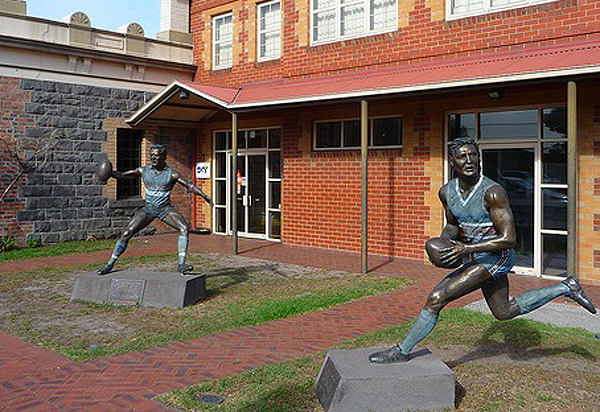 On 21st September 1997 the bronze statue of Doug Hawkins was installed right next to his idol E.J Whitten, and even though I am a mad, passionate Richmond supporter I still have a lot of respect for other teams ‘legends’.

So now both statues stand erect in front of the Braybrook Hotel on Ballarat Road, and I suppose if I was a Western Bulldogs supporter I would enjoy driving past the two legends all the time. I say this because when I drive past Punt Road Oval, I take in with pride the wonderfully newly developed Punt Road Oval and the magnificent bronze statue of one of our many legends, ‘Captain Blood’ Jack Dyer.

Both Hawkins and Whitten played for the Western Bulldogs, but not many people would know that they both also played their junior footy at Braybrook, which is why it is even more significant that their statues are a minute away from Braybrook Football Club and right next to each other.

My cousin is a passionate Western Bulldogs supporter and back in the day when the Whitten Oval was still an AFL ground, we would head down to watch the mighty Tigers play the Bulldogs and we would always sit on the Doug Hawkins wing because my cousin adored him and I respected him for what ‘Dougie’ had achieved during his career.

I remember on one occasion going to watch the Doggies play Melbourne with my cousin who had dragged me along. Doug Hawkins absolutely dominated the game with over 30 possessions and 4 goals from his famous wing and earned the nickname ‘Dancing Dougie’ for his evasive ability.

So the next time you drive by Braybrook Hotel on Ballarat Road take a glance at a couple of bronze legends.