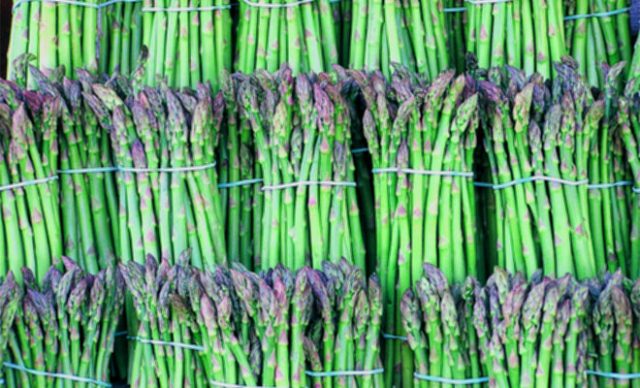 The spears of spring come in white, green and purple. The difference between the three varieties is light. Green asparagus sprouts in the delicate spring sunlight. The coveted white vampire of vegetables is grown in complete darkness, whereas the purple is allowed just enough sun to bruise.

The taste differences are subtle. Ranging from grassy and fibrous to nutty and sweet; to fine and silky with a slight bitter bite as retaliation for the lack of light.

Asparagus is a perennial that takes three years to raise its first crop. It also has an infamous side-effect: changing the smell of urine, caused by asparagusic acid. Perhaps that is how it became a revered offering to the ancient gods.

Hippocrates was one of the first to be interested in the medicinal properties of asparagus, using it to treat diarrhoea and urethral pains. He also considered it an aphrodisiac, like most things long and pointy were in those days.

But it was the Romans who first cooked asparagus and served it as a complementary vegetable dish to fish. It’s been a long love affair.

As Europe went dark in the Middle Ages, asparagus remained largely forgotten by Europeans while being cultivated in the Arabian gardens. Eventually, the tasty spear found its way back to the noble gardens and tables of the French aristocracy dominating Europe in the 16th and 17th centuries.

According to the records, Louis XIV was so fond of asparagus he described it in his writings as the size of a swan’s feather strictly for nobility.

Then came the Age of Enlightenment. The time of reason and rationale. While Kant and Voltaire were mongering the minds of the bourgeoisie, the asparagus finally escaped the walls of the castles and chateaus in search of more democratic palates in the farmers’ markets of West Europe.

Today, the world’s leading producers of asparagus are China, Peru, Mexico, Germany and Thailand. The vampire variety is cultivated in Europe, and here, in the Victorian spring, you can find some at a good farmers’ market and specialty grocers.

Like a flower, the spears need to be kept upright, moist and fresh during transport and storage. The French are the self-proclaimed connoisseurs of asparagus, using a moistened cloth on which to rest the stems to help retain moisture after harvest.

Whether you prefer asparagus the continental way topped with a runny egg and hollandaise sauce, or the modern style wrapped in bacon sprinkled with Parmigiano-Reggiano and drizzled with apple cider vinegar, make sure to enjoy asparagus young and fresh while the season lasts.