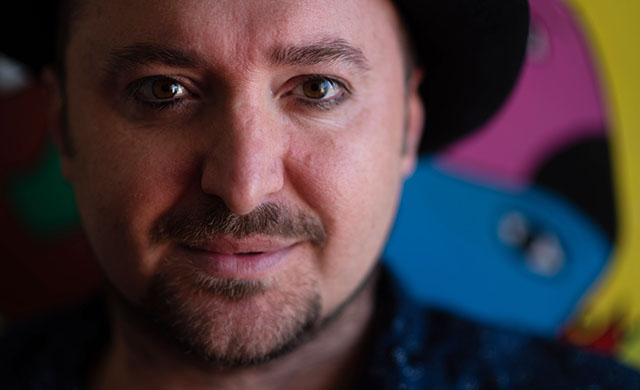 Born in Srebrenica Bosnia, the place of the greatest genocide in Europe since WW2, Saidin Salkic is one of Australia’s leading contemporary artists, with 14 films, public art installations and national and international presentations to his name. He has been featured in numerous national and international media outlets including SBS On Demand, SBS World News, Al Jazeera Balkans, CNN Balkans and many others. The Westsider has been meaning to catch up with him for a while, so why not now – what else are we doing?

The Westsider has always followed your work, what have you been doing for the last 3-4 years?

A lot has been happening. In what can be described only as an incredible surge I have completed 11 highly praised films in the last three years, one of which Waiting for Sevdah, Bill Mousolis has named Australian film of the decade. John Flaus has compared my place in the history of cinema to the place of Gertrude Stein in the history of literature for the inventive qualities of my work. In 2018 CNN Balkans, in their feature has called me “Australia’s greatest artist”. I have also made huge breakthroughs in painting, moving from painting into digital painting. I have made thousands of pieces of art, my work has been curated by the Adelaide International Film Festival, La Trobe Art Institute, City of Greater Dandenong, Wyndham City Council and many others.

What percentage of your time is split between film making and canvas?

There always must be equal energy and commitment given to each. The important thing is that those are two completely different fronts. Making advances in each of those fields implies different effort. What is avant-garde in cinema is different to what is avant-garde in painting. This is partly why it is so exciting to try and make progress on two different fronts, at the same time. If I am making a film, I am completely in that work, if I am painting, again, I am completely in that work. But there are many sub discourses of each, layers that one must do, especially if you are doing everything by yourself, as I am.

Do any of your recent works find you revisiting Srebrenica after 25 years?

I have intimately marked 25 years since the Srebrenica genocide with my HOME exhibition that opened in July. One’s experiences never leave, my experiences are always inside me, influencing me with every step in every possible way, at the greatest intensity they can. That is always like that. In my SBS On Demand interview I have said that for many years I was making the art for the glory of my father.

How do you feel COVID has impacted you and other artists?

In many ways, I have always lived like this. I have always lived in isolation, working, largely disinterested in what the society was offering as their vision of (cheap), temporary joy. To achieve the happiness you must sacrifice some of that cheap temporary “joy” which society is offering constantly. I am too entertained creating to need to be entertained over a cup of coffee by someone else. In a way it is sad to see how many people need exactly that- the cheap social “joy” and entertainment. I also felt inspired to add to my country some new art and ideas and to help evolve its culture and art further, in my way.

The Conversation with John Flaus – where did the idea come from?

John and I have always talked passionately about things. About everything. Interesting thing is that we didn’t really talk about cinema in The Conversation. The idea was kind of in the air to have “a head to head” as John put it. Cinespace assisted in filming and it really turned out to be one of the most memorable sunny afternoons for all involved. We sat under the fig tree in my backyard, sun was warm and the afternoon ended while we sang: ”Give me a home among the gum trees”… with my melody of the song. It was also a chance to have that record of the affection and friendship John and I have felt towards each other, in a unique way.

Silence’s Crescendo is screening on Channel 44 in Adelaide, how id that come about?

Silence’s Crescendo is one of those redefining films. It had its world premiere at the Adelaide International Film Festival in 2018 and it kind of returned to Adelaide in that way. It broadcasts exclusively on Channel 44 in early October. I think October 4th at 9PM, Sunday. It will most likely, simultaneously be possible to view it on Channel 44 website, for people who don’t live in South Australia. Flaus has called it “A bloody good picture and it deserves to set a lot of people thinking about what the nature of cinema is”. 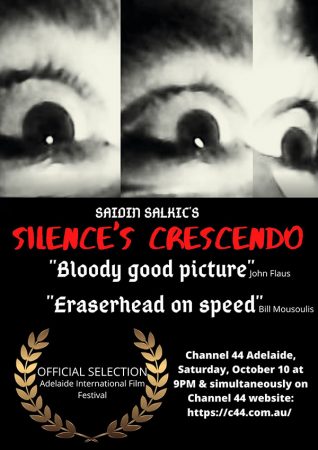 Last month you took part in an exhibition, can you tell us about that?

It was an important, national HOME exhibition, curated by the City of Greater Dandenong. It was the first official exhibition of my new digital-paintings where I showed some of my monumental new works such as With Ned Kelly in Paris.

Another exhibition is happening shortly, where, and what will you be showing?

This is also an important exhibition HEARTLANDS, curated by Ames Australia. It will be launched by the Victorian Minister for Multicultural Affairs Ros Spence. It opens in late September. I am showing 5 of my new digital paintings. It is an exciting show where for the first time I’ll show The Glorious Summer Fun, McRembrant and Coke for Mona Lisa, for example.

What’s on the horizon?