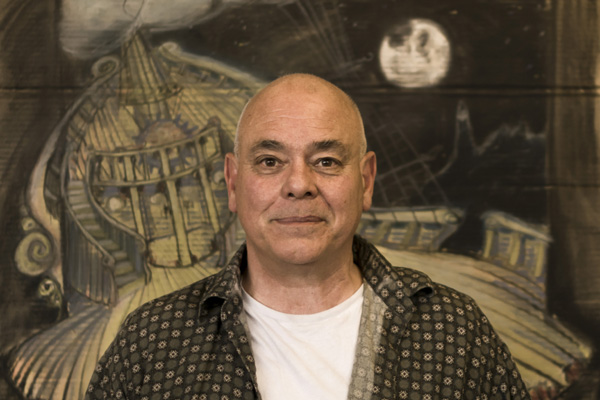 Greg Carroll is an ex-actor who now directs and designs commercial and subsidised theatre productions and operas. He developed a cult following internationally in the 1990s for his portrayal of Hermes Endakis in the children’s television program Ship to Shore and as Sargent Soaker in the Super Soaker XP50 commercials. During a vast and varied career he has helped to set up over five theatres – including the Carlton Courthouse and Theatreworks in St. Kilda – as well as directing commercial shows nationally and internationally. I recently caught up with Greg in a warehouse in West Footscray where he helps build sets that he has designed for Melbourne Opera.

I grew up in a house on Coronation Street, West Footscray

We had ducks, geese, chickens, working dogs and a couple of pet dogs. I had a pet sheep and dad brought a horse home one night. He was half pissed from drinking up at the Rising Sun Hotel that he came home with a horse!

Teddy Whitten used to come around our house all the time but our family barracked for North Melbourne. I wore a North jumper and I had to fight my way to Kingsville State School every day and fight my way home. 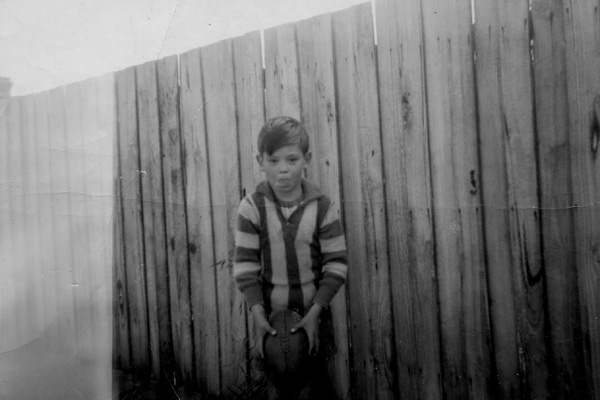 Once Teddy Whitten gave me one of his jumpers and a Sherrin footy, I kid you not. And I wore that jumper for about two weeks. Every kid in Footscray was so jealous of me. Eventually my mum washed it, she put it out on the line and when I got up in the morning it was gone!

I did a lot of boxing training at the Footscray Youth Club with Spencer Driver, he was fantastic. He was made of iron. One night he said “Get in the ring with me Greg”. I’m 18 or 19 and I thought I was pretty good. Spencer gets me in the ring and he gets me in a clinch and he’s getting me to punch him in the solar plexus with an uppercut, left right, left right. I’m pulling the punches because I love Spencer and I didn’t want to hurt him but I’m an idiot basically. He’s going “Harder Greg, harder!” So I let go and started really doing it. Eventually I couldn’t lift my arms. I looked at him and it had no effect on him whatsoever. That’s the first time I learnt humility, that there is always someone better than you.

It was a pretty rigorous education

I went to a catholic boys school, St. Paul’s in Altona. We had a teacher called Clive O’Connell who is now the classical music reviewer in The Age. The first day he started reading The Odyssey to us. We thought “WTF?” Eventually he absolutely got us into it and from that point on so many guys in my class became academics and musicians. We were trained in the classics and that was a really good background.

Having that classical education, especially with literature, and our application to music really opened our minds up to the possibilities in all sorts of things, particularly music. One day, I was about 17 or 18 and there was a circus in Williamstown Rd. Dad said, “Instead of watching TV, go down and look at the circus.” I went down and saw the circus and from that point on I think it got me; the skill that those circus people had and the smell of the sawdust. Then when I went to Footscray Institute of Technology studying, there was a sub-major in drama, so I did that. Then Peter Green, who was a lecturer there, took us all into The Pram Factory one night and I saw Tim Robinson’s ‘Mary Shelly and the Monsters’ and that was it. Bruce Spence was this Percy Shelly spider-like creature; it was the most amazing thing I’d seen in my life. I went back the next day and said, “Can I work here?” and someone said “Fuck off!” Then Fay Mokotow said, “Here’s a bucket of paste, start putting posters up.” I walked over the road; there was a laneway next to Jimmy Watson’s, so I started putting the posters on the walls there. These two detectives pulled up and they said “What are you doing?” I was as fit as a fiddle and I took off, I knew they wouldn’t catch me; they were too fat and slow. I ran around the block and I came back and they just left everything there so I just continued on putting up posters. That was my first job in theatre.

Going to university, my professor, John McLaren, made me his assistant editor on the Australian Book Review. Literature led me into theatre and the world of literature. I used to correspond with Patrick White and all the great writers in Australia which was fantastic.

I started acting in shows

I did gigs at La Mama and The Pram Factory. Suddenly you’re doing 2 or 3 shows at once and they used to say, “Oh, who can do the set?” and I’d go, “Oh, I’ll do it!”. I had no idea but I just did it. I loved theatre so whenever anything was needed I was really happy to do it. I always saw theatre as a collaborative effort. I was very lucky, I met all the writers from that time, Hibberd, Romeril, Buzo and I just became friends.

My first ever TV thing was a miniseries called Waterfront with Greta Scacchi. I had to play a Sargent Copper. I knew a few people on set so I learnt from them. I did a couple of movies and a few guest spots on TV, mainly miniseries which they did a lot of in those days. I did The Far Country with Michael York. 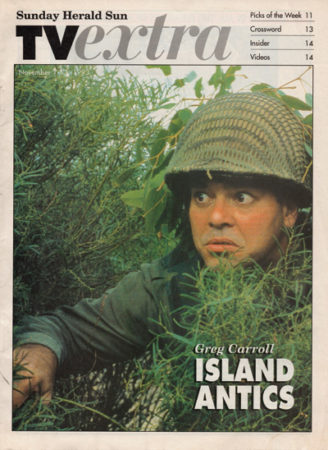 It just snowballed but I always stayed in theatre. I’ve done over 300 shows. I got into operas, I’ve directed and designed a few operas, and I’ve done a lot of shows that I really loved. I’ve done a lot of commercial productions. The last 15 years I think were the pinnacle, I’ve got Swan Song coming up at Theatre/Works (St. Kilda) in May and think that’s one of the best works I’ve ever done, I directed it in Sydney, and it had the best reviews ever.

She sat in the front row and she was so ecstatic at the performance, I did six auditions in six weeks for her. I was up for an ABC series, Round the Twist, the carpenter on that home show that Shirley Strachan (Our House) did and then I was up for Ship to Shore, which was filmed in Perth. So I asked and got a ramshackle house on the beach at Fremantle with the family. I did three seasons, 93/94 and 1996. Then they came to me and asked how I felt about doing the movie and three  more series and I thought, “I feel really good about that.” But I never heard anything more about it! I know that it grossed $13.5 million worth of overseas sales in the first season. It was a very successful export from Australia. It was a really well paid gig, I had my family with me, we had a house on the beach, who could ask for anything more?

It was on two networks at the same time, it was on ABC and Channel 9. It was on Foxtel and Nickelodeon in the US and the BBC in England. I loved doing that role, I had a great time, the kids were fantastic, the crew was fantastic, we had ball shooting that. It was just pure enjoyment from go to whoa, you could not ask for a better gig. Surfers loved it and so did the aboriginal communities, I was so big with indigenous communities, it was wonderful.

Hermes Endakis was who he was

I think the producers thought that it should have been more of an adventure drama, but when I got the script I was convinced that it should have been a comedy. I made Hermes a complete idiot. He would never process anything. Everything that was in front of him, that was how it was. He would never learn anything so he could always move into anything with great enthusiasm and never realise that he’s a complete idiot! Hermes was quite crazy but I always played him for real, I never sent him up. I used to curl my toes up in my boots to make me walk funny. It makes you bend over a bit and that keeps you the same height as the kids.

I never really got offered any work (in TV) after that. You’re only as good and what you are from the last gig you did, and if you play an idiot they think you’re an idiot.

There was one thing I got which was fantastic. I’d just got back after the last season of Ship to Shore and I got a phone call. They were casting a TV commercial in New York, LA, Sydney and Melbourne. They asked me to come in an audition for it. I got the script but for some reason it wouldn’t go into my head. I go into the audition and I just turned Hermes on them, with an American accent. I just did a performance, because I thought I wasn’t going to get it. On the short list of two, they flew me up to Brisbane to meet the American producers. I got there and they asked me to do what I did in the audition tape and I said, “Well, show me the audition tape.” Because I couldn’t remember what I did, and they all laughed because the tape had gone to Austria! There must be warehouse in Austria with parcels meant for Australia.

I just goosed it again and I got the gig. I was Sargent Soaker in all the Super Soaker commercials all over the world. The money was fantastic! Sargent Soaker became a cult figure in America. 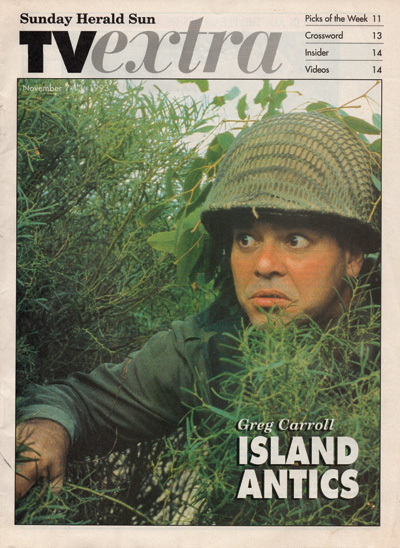 After that I went straight into directing commercial theatre productions

I did Shakespeare in the Park for Glen Eslton in Perth and Sydney. I also directed Puppetry of the Penis here and in Toronto. More recently I directed and designed a lot of classics for Stork Theatre. Anna Karenina, The Penelopiad, The Lover and The Red and the Black. They were all 4 or 5 star shows.

I directed Squizzy Taylor the Musical and am I’ve also directed a couple of operas.

I’ve designed the set for Wagner’s Tristan and Isolde. It’s a 4 hour and 7 minute opera. You have to surrender yourself to the music. It’s a huge set going into The Palais (Theatre in St. Kilda). We’ve got an eighty piece orchestra, fifty strings…FIFTY STRINGS! I’m also designing an Opera for Bruce Beresford in October, Othello.

I’m also working on a few film projects. One is a film about Keith Richards living in a Brunswick kitchen for two weeks in 1973, that’s a hoot but it’s an Arthouse film which makes it hard for people to comprehend. I went to film school for a year and that was good fun. I loved that because I was with all these really young people and they were fantastic and I just loved their enthusiasm. I’m an enthusiastic person still now. It was a one year course at VCA. It was the lowest of the low. We didn’t even rate a certificate. But I like being down there.

Mario Varricchio is co-proprietor of arts-focussed café ‘happymaree’ in Yarraville. He cooks, he writes, he draws and is the taker of photos. He also talks.