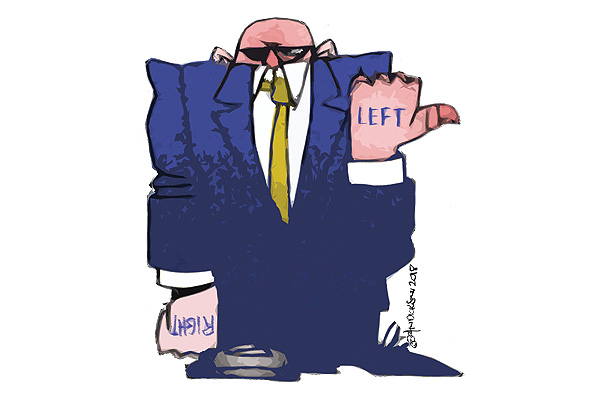 Last time, we learned how Mandible* is inclined to allow emotion to cloud his judgement. His sweet employment arrangement at the Department of Interstitial Indices was revoked when he described junior colleague Clive Sleem as ‘a festering pustule, a superating canker, an oozing ulcer and a scooping of sewage’. He said it to Sleem’s face and he said it in public. Meanwhile, his home fires were extinguished when it was revealed that his wife, Jan, had been having a longtime affair with Mandible’s* ‘friend’, Belty. Belty owns a business that ‘recycles objects of delight’, rejoices in the name ‘Belty’s Bazaar – It could be here!’, squats on prime river frontage owned by fellow ratepayers of the shire and for which, curiously, not one dollar has changed hands. It is said that some [if not all] of what he offers for sale is of dubious origins and wrestles with opaque legalities. But not by me.

It has also slowly dawned on Mandible* that his twin children, Mayhem and Meander, exhibit a physical appearance more redolent of his [former] friend than of himself.
Now what?

‘I wasn’t so much fired as oozed through a door to the street by Mincer-from-security, who was ‘just doing me job, mate’. No, not your mate.
Actually, Mincer is just one of a cavalcade of reprobates, camp followers, chancers, charlatans and shysters who populate this singular corner of the labour market. These people are supported by your taxes. I feel that it would be remiss if I did not expose at least some of them to the harsh light of day in the name of ‘transparency’, which in my case is a euphemism for bitterness and revenge.

Christian ‘Mincer’ Christian is a wall of a man. He measures two axe handles in every direction. A failed priest, his calling was more of an insistent whining from his mother, Ethel Christian. She had named him thus in the vain hope that he would be the one to ‘lead us out of the darkness into the light’. The only darkness/light prophecy he had fulfilled was in escorting employees ‘in excess of current requirements’ out of the backdoor and into a sunlit alley.

‘Mincer’ was a self-imposed moniker during another failed outing, this time as a professional wrestler. While he thought it was a warning to opponents of his ability to, should he so choose, cut them into ever decreasing pieces, his incompetence led fans [of other wrestlers] to choose another definition. They highlighted the peculiar gait that the vast acreage of his quadriceps caused and allowed opponents to easily catch and dispose of him.

Back at the Dept. of II, Mincer had run a lucrative book offering odds on which poor sap was next for the drop, until it was discovered that he had bugged the boss’s office with a listening device he bought mail order from an advertisement in the back of a comic book. He received counselling as he was ‘too big to fire’.
There, take that.

As I career through this recent history, I am mindful that we have arrived at the doorway that leads inexorably to the revelation that my wife, Jan, and my ‘friend’, Belty, have been enjoying each other’s company, in the biblical sense, for some time. Perhaps time enough to throw some shade over the parentage of our twin children. Mayhem and Meander are about to celebrate their ninth birthday.

Although I’m in the mood for a bit of freelance lashing out, I can’t help thinking that the offence to ‘what is right and proper’ is cluttering others’ nostrils, not ours. Yes, complicated; yes, awkward; yes, duplicitous; and yes, perhaps a dose of wilful blindness. But I like these people and I suspect that they quite like me. And because we have got on reasonably well thus far, why start galloping from gunwale to gunwale waving the flag of outraged indignation?

I think we can keep this little boat on an even keel, albeit with a modified crew and a reconfiguration of docking facilities. Let’s see.

Simultaneously, I have won a contract to return to my old Department of Interstitial Indices. I am to be paid what talkback radio hosts will describe as an ‘obscene plundering of taxpayer dollars’ to complete a study into SLIDE [the Seamless Leverage of Indolent Deliverable Experiences]. I would offer an explanation for this, but I don’t think there is one.

But I can reveal something about Interstitial Indices.

‘Interstitial’ tells you that we lurk in the gaps, the spaces, the murky fog between here and there, to and fro, up and down, hither and yon. We can be found between metaphorical teeth, poor joinery, clumsy introductions and barroom decisions. In short, where the rot sets in. It is our calling to alert ‘stakeholders’ and reveal the ‘indicators’ [the titular ‘Indices’] of these pressure points. Which begs a couple of questions about my personal circumstances, but I digress.

And here’s the best part: we are a Government Integrity Standard Team (GIST). This means that anything of significant impact to the State’s coffers must be passed through our digestive tract. With some judicious verbal plaque, we can stop any bright idea dead in its tracks.

While this smacks of arrogance and irresponsibility, I would argue that it reflects society in general, and certainly the misty arc of political discourse. It is the smokescreen disguising incompetence, incoherence, ineptitude and routine bollocks. We are, appropriate to our KPIs, providing a public service.

Of course, we are subject to review, but it is our peculiar talent to load our findings with sufficiently interminable distractions, red herrings and obfuscations, wrapped in layers of discombobulation enough to deter the most dogged of litigants. Yes, we are public servants in the purest sense.

So I find myself between things. Again.

*Possibly not his real name.
© slightlyangryguy.com