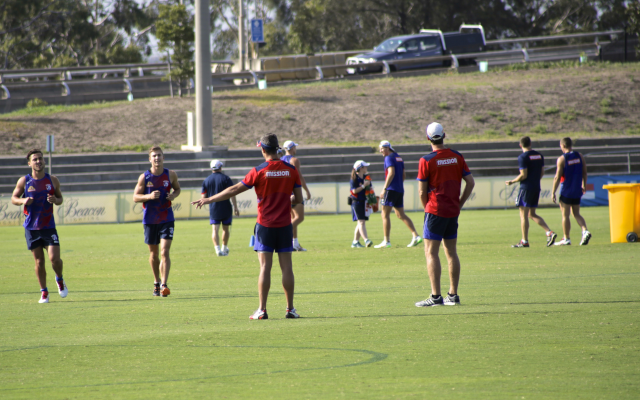 Full disclosure, I’m a Richmond supporter. I know, I know, feral, noisy and arrogant. So now that’s out of the way, I can assure you that living in the west, my “second team” is of course the Bulldogs. Apart from the fact that, you know, all my local friends and everyone I bump into in the street follows the Dogs, until they built that row of townhouses over the back of my place I could literally see Whitten Oval from my balcony.

What a sight those lights were on a balmy summer night during pre-season, where a strong northerly would send sirens, whistles, voices, and even the occasional waft of freshly cut grass our way.

As a Tiger-man, naturally I have fallen victim to some of the many conspiracy theories that outline the how and why around the AFL setting up Richmond to fail – and why wouldn’t they? When a sporting governing body is propping up multiple ailing clubs, it doesn’t need success from a club whose own hordes of supporters somehow kept it going during a period of 30+ years of failure. Any club that can survive that without folding or relocating is doing fine without AFL House’s help thank you very much. In fact, prudent business management dictates the AFL absolutely should have a vested interest in that club’s failure at the expense of other, less fiscally sound clubs – they’d be negligent in their duties if they did not.

Things that make you go hmmm

One thing that can’t be denied however, is that the AFL have brought in a series of rules and adjusted the interpretations of some existing rules over the last 2-3 years to tempt teams to be more attacking, and mandate restrictions on defensive structures. Like so many other sporting codes, higher scores are apparently more entertaining and give a sport a greater chance of gaining and maintaining the support of the fickle and attention span deficient. The AFL therefore decided to borrow anti-defensive measures from games like basketball (no zone defence), NFL (no hitting the quarterback, plus stricter pass interference rules), and cricket (20/20, power plays, a ban on bouncers). So what are these new rules and how do they work? Let’s break them down:

What’s the rule? Teams must now have 6 players in each of three “zones” for all centre bounces – 6 inside each of the two 50 metres arcs, and 6 between the arcs.

What were they thinking? The AFL hoped to create cleaner centre clearance movement and greater scoring opportunities, by basically banning the practice of defences flooding back and causing congestion even before the ball was bounced. It’s true – quite often teams would start with an extra, or even two in their defence, and if they were ahead by one point with 30 seconds remaining… well they could have put as many as 14 players in their back half. Not now.

What was the outcome? In its first two years the difference seemed minimal. Defensively, teams worked hard to create stoppages around the ground, which gave them plenty of time to get personnel back to defend against quick ball movement coming forward. This year we saw teams focus on winning centre clearances as a priority to counter this. Who improved in this area in 2021? Melbourne, Port and Sydney. Who went backwards? Richmond, Collingwood and Carlton. Now take a look at the ladder and decide if this worked…

Expansion of the kick out zone

What’s the rule? Instead of being constrained to the goal square when kicking out after a behind – like fullbacks have been for the last 100+ years – the AFL expanded this zone and pushed the man on the mark back a further 10 metres. Or maybe it’s 20 metres? Who knows, they seem to make it up as they go.

What were they thinking? The AFL saw powerful teams (like Richmond) constantly locking the ball inside defensive 50 as a blight on the game, so to allow weaker teams to more easily clear defensive 50, they allowed defenders to run out to 25-30 metres without hindrance and bomb it to the wing.

What was the outcome? Smaller bodied (Gold Coast, St Kilda) and uncontested ball teams (Geelong, West Coast) benefitted by being able to start their forward thrusts outside defensive 50, rather than from within it. Whether that allowed for more scoring chains is debatable, as defences still put a great deal of effort into stacking their back half. We did see a lot more free flowing play between the arcs though.

What’s the rule? Only one player is allowed on the mark after a mark or free kick, and once in position, they cannot move – up, down, sideways or backward.

What were they thinking? The AFL hated seeing strong defensive teams cut off angles by pushing the old rule to the limit – by technically staying behind the line of the mark but still moving side to side to prevent quick ball movement. Quicker flow means faster forward entries, and more scoring… right?

What was the outcome? A disaster for teams that had previously built their defensive game around preventing the opposition playing on, running on, and switching play from the wing to the centre. Suddenly teams were bombing inside 50 after a series of handballs or a deft switch of play, and often this unfolded quicker than defences were able to flood back.

Coupled with the new rules, some rule interpretations have also been adjusted to make defending harder:

In the current scheme of things, to the AFL, rusted on followers like Doggies fans are the worst kind of supporter. The AFL needs people to watch multiple games each week (and be exposed to lots of ads), not just watch one game that features the same team. In a nutshell, they need “fans of the game” and not “fans of a team” in order to survive and progress, this is the corporate model they have built and committed to at the expense of the heartland – there is no way back now.

I see three improvement areas for the Bulldogs going into next year, and this year’s finals series holds the key, as it so often does, even if teams don’t notice or are slow to react. Not one of the recent changes was brought in to make defending easier – and the teams that won were able to effectively attack. Ten years ago AFL recruiters insisted that all players drafted must be great kicks of the ball. Then after 2017 they had to be able to chase and tackle. In 2021, teams finally worked a pathway through all that, with the help of the rule changes that even Jonathon Brown, not exactly the footy media’s most astute observer, acknowledged were “brought in to stop Richmond”.

1 – If you can keep your feet, while all around are losing theirs

Go back and watch the highlights of the 2019-2020 finals series. Dustin Martin isn’t the fastest, tallest, or fittest player on the park. But big games often turn on moments, and when your opponents fall over or lose their balance, it can make the difference between winning and losing. The Dogs have players who can stand up when it counts.

My favourite highlight from the recent finals series was Bailey Smith plucking that high handball from Mitch Hannan, and coolly slotting the goal on the run to put the Bulldogs in front at the Gabba. But on Grand Final day Melbourne destroyed the Dogs by gaining first possession, and then with quick ball movement by hand through and from the middle. If any one of Petracca, Oliver or Brayshaw fumbles even for a milli-second through those fast-paced possession chains, the Dogs might have been given a chance.

Melbourne’s finals performance is obviously still seared in our minds. They grabbed the ball and ran. Watching Clayton Oliver go from nought to a hundred in two seconds flat was outright scary. But we seem to forget the Swans did it early with a bunch of young kids with less than 20 games under their belts. They wore down by season’s end, but don’t be surprised to see them, and anyone else prepared to show some dare up there contending next year. The dogs have this capacity too.

Every Dog has its day

The Dogs need another contested ball beast to help Libba give them first use from clearances, and try to then apply the three keys above. I really felt for Treloar, trying to stem the flow in that second half, it was hard to watch, and way too much to ask of an outside runner.

Key position players may not be a Bulldog strength, but it’s not really Melbourne’s either. Win the midfield and win the game is the Doggy way, but regardless Josh Bruce will be welcomed back, and a backup key forward should be traded in. Easton Wood looked a tad small and a step behind through parts of the finals, another backman who can play short and tall would be useful.

Ruck remains a bit of a problem area, I’m sure Luke Beveridge would prefer an extra runner, rather than bringing in the more physical Stefan Martin to work in tandem with the more mobile, but still-not-quite-that-imposing Tim English. Hopefully the latter can improve on his finals performance – he was soundly thrashed by both Oscar McInerney and Scott Lycett, and on Grand Final day lowered his colours to Max Gawn, whilst barely drawing even with the impressive, yet inexperienced Luke Jackson.

In every ball sport on earth coaches are constantly trying to find ways to get the ball to their most skilled and impactful players and provide them with either space or time – or on a good day, both. What these three areas discussed highlight is that players that can master them can gain a true advantage that the game rarely just hands to you, players and teams must take it.