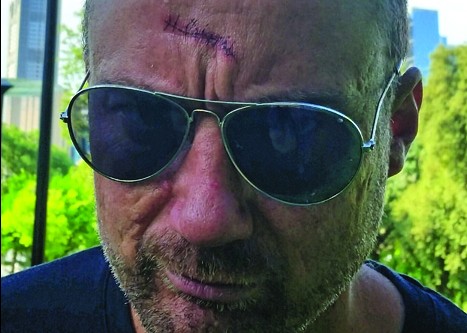 The Wingate Dumbocracy: Peter Wingate immigrated to Yarraville from the leafy East before it was even trendy and likes to spend his days studying education (don’t get an education, just study it), cooking, avoiding making art, and pondering fantasies like living in a representative democracy that is one and, having his hands around the neck of <insert name of particularly inane politician here>

The Australian democratic system, (or lack there-of) cops a lot of flak from the public, and I for one am no exception when it comes to the grand Aussie tradition of (gleefully tearing down) sharing a healthy scepticism about those in power; but why hasn’t this constant critique delivered a representative system we have faith in?

You may think that I’m being negative and cynical, but think about it;  imagine that you approach a complete stranger on the street, tacky TV vox-pop-style, and ask them the following question: ‘Do you have faith in Australian politics and politicians?’  The answer in the vast majority (ref.1) of cases will be along the lines of ‘I don’t think much of Australian politicians and politics’ (and that’s the sanitised, euphemised(sic), diplomatised to-within-an-inch -of-your-life (sic) version).

Also consider whether a negative yet constructive response would be forthcoming eg.’I don’t like the current system, I think that Communism would work much better because…/ I’d like to see greater integrity embedded into our political system/ I think compulsory voting encourages lowest-common-denominator style politics etc.’, or would responses be more contemptuous and dismissive; ‘They’re all corrupt/Politicians are <insert abusive tirade here>’.

Unfortunately it would most probably be the latter – and the latter is not compatible with a properly functioning democratic system.  A government ‘of the people, for the people, by the people’ (cheers Abe) needs, well people – people who are engaged in a critical, constructive and caring way.  The ideology of representative democracy is idealistic i.e. based on the assumption that its citizens will not be disenfranchised, disengaged and disgusted.  Without a constructively engaged populous democracy ceases to exist.

With that in mind I’d like to put forward the view that, rather than not deserving the <insert abusive/libellous adjectives> politicians and political system we have, we do not deserve a functioning democracy.

There, I said it….we need to start shopping around…absolute monarchy anyone?  Socialist Dictatorship?  How about Capitalist Communism Chinese-style, or isolationist Facism that aint no fan of K-Pop?

Perhaps we should start hedging our bets political-system-wise because we’re obviously not up to scratch for this whole Representative Democracy palaver.

We are comfortable, confident and, dare I say conditioned by the indisputable ideals of democracy so that the institution that underpins our whole society often becomes simply white noise to our way of life.

If you have the gall to treat our democracy (or lack thereof) in a way that some would describe as the ultimate insult; with ignorance, disregard and contempt, expect the same in return.  It really is a all-in-or-none-in concept, our old friend democracy; showing no sympathy for hangers-on, free-loaders or cynics.

Get involved or get out, I say.  Better yet, think of a better system….I like the idea of a benevolent dictatorship (as long as said dictator is me).