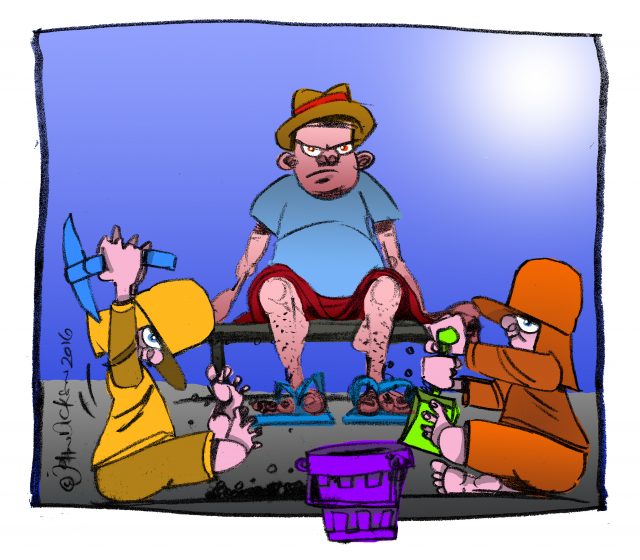 Port Phillip Bay beaches are an attractive seduction on a hot Melbourne day. Shallow enough for kids, deep enough for the strutters and the nutters. But try getting there from West Footscray – no car, two kids.

When I say kids, I mean two recalcitrant, anarcho, perpetual motion machines with a taste for disruption. Add that to my again flying solo [Jan having reluctantly accepted employ to shore up wealth, relationships and CV], and that I am easing my way out from under a monstrous drunk, and focus becomes a challenge.

I concoct a double espresso while Mayhem and Meander repurpose the family room into a surprisingly accurate facsimile of the Somme, 14 July 1918. A modest splash of a favoured single malt finds it way into my coffee, and the dog’s bark recedes.

Because I am a male, I prepare for the journey deploying my innate skills in abstract futility. Hats are good, bathers are good, and, channelling partner, sunscreen is good. A drink would also have been good, but only that which contained two parts hydrogen to every part of oxygen, and how could I possibly remember that? Also, something about food.

I choose tram then train because it doubles the chances of M&M becoming ratty, exhausted and dangerous to fellow travellers, and I like to live on the edge. Also, the Willie Beach rail station is still some walking distance from the beachfront, especially viewed from the height of four-year-olds, thereby providing the second act twist so keenly sought by writers of potboilers.

Gathering the thoughtfully placed Beach Bag [contents: two towels, extra sunscreen, strange but colourful miniaturised excavating equipment] left at the front door by Responsible Partner, and, admiring how clever I was to have already dressed the varmints in bathers, suntops and hats, we thong our way into the world.

The three blocks to the tram stop look an impossible distance until Belty Slopes slides to the gutter in his brand new VFII Holden Ute – the ultimate sports machine.

‘Where you headed Tonsil?’ demands his gap-toothed head. I always enjoy his prang fest attitude to the language – my name was as much Tonsil as his was Belty – but I was reluctant to engage – I still owed him money for our ‘entertainers’ kitchen’ that arrived slightly soiled and subsequently installed at machine gun pace.

Nine seats left on the 82, and M&M take five of them. I’m sanguine. People still consider men squiring their children about the world as some kind of urban hero. We’re not, but that’s for others to say.

We negotiate the Leeds St blah and cross to the elaborate, labyrinthine transport hub that is Footscray Station. Elevators, escalators or stairs, you choose kids. Well elevators, of course.

The train to Willie is filling. We take a facing row in the last carriage. M&M begin fulminating over land rights centred around window seats and middle seats in their mysterious twinny-we-know-what’s-going-on-here while Mrs Hausfrau opposite admires their beauty, insight and curious wisdom.

Seddon, with its uninhabited brickie tower [‘Is that a castle, Dad?’] flips by, and then Yarraville. Its jaunty chimneyed Victorian buildings belie its darkness, represented best by the grey-clad, bitter, weighty, absurdly-badged umpires of the Free Market of Universal Travel. They waddle aboard, reinforcing my first impression of a cacophony of misfits, and begin checking Myki cards.

I am smug and prepared to be haughty and condescending. I had swiped my Myki and ushered my progeny onto first tram, then train, with a smile on me lips and a song in me heart.

‘May I see your Myki card, sir,’ says Voluminous Toady of the Fascist Ruling Class.

‘Well, of course my good man,’ retorts worldly representative of the Pulling Yourself Up By Your Own Bootstraps tribe.

‘This be their fourth summer, Gonad.’

‘Children four years and over must have a travel card, sir.’

‘Bollocks,’ I say, standing on a considerable indignation.

Suddenly, the one becomes six and light vanishes.

And so begins the public humiliation drone: ‘May I see some form of identity with your name and address on it please sir.’ ‘Certainly, Featherweight.’ ‘No need to be like that sir.’ ‘Like what, Pintuck?’ ‘My name is Harrison, sir, like it says on the badge.’ ‘Forgive me Hermansburg, my eyesight you know.’ ‘You will be fined $76 for each child travelling without proper ticketing.’ You’re shitting me.’ ‘And a further $76 for offensive language, and you will leave the train at the next station.’ The alliance with Mrs Hausfrau splinters.

No, it’s Spotswood station, 32 degrees and the kids and I have been Robinson Crusoed. I reach for my phone.

HELPING OUR KIDS WITH COUGHS AND SNIFFLES