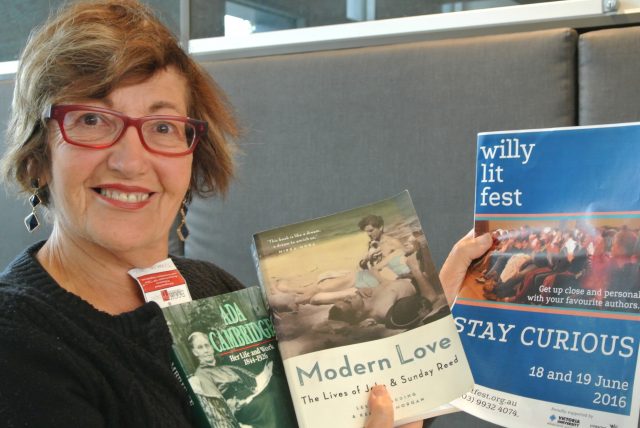 Where she gets her energy, I don’t know.  Angela Altair is quietly spoken, but to sit opposite as she talks books – at conversational full-throttle – is like walking into a sou’wester as it sweeps across the coastline of her hometown, Williamstown.

Angela has served Hobsons Bay municipality for over 17 years as councillor, including two terms as mayor.  Less well-known is her deep connection to the written word, although there are clues: Angela is founding president of the committee which oversees Williamstown Literary Festival (this year, the perennial event was held from June 16 – 18.)

Angela has a public official’s profile; our meeting is occasionally interrupted by smiles and friendly interchanges with locals.  In the hour or so together, much longer than expected, Angela free-associates over a range of topics: old-time Williamstown authors, seismic career moves, a stifling upbringing, favourite community projects.  There is an enduring thread: books, books, books.

At times, our conversation rambles but is all-the-while engrossing.  Angela was barely a toddler when her family stepped off a boat from Malta at Station Pier ’54.  How bright an Australian future must have seemed.  A home in a suburb called, Sunshine.  The family were committed Catholics: church was every Sunday, confession every Saturday … “our entire social life was the parish.”  More than once, Angela returns to the subject of her strict and over-protective father.

Books were an escape, helping a bright young girl realise she wasn’t alone.

Desperate to travel, Angela took off the moment she had the chance on a ’70s-style grand tour of Europe.  She returned to work as a secretary for a prominent Melbourne business identity.  Her life took another turn.  Angela accepted a mature-aged placement at RMIT in a course that a girl growing up on the wrong side of the tracks could only dream of studying.  So began Angela’s career as a writer during the golden years of journalism.

“Stuart Brown taught me everything I know,” says Angela who in the ’70s served her cadetship at Fairfax’s, The Footscray Mail.  “Every word, a drop of blood,” editor Stuart Brown was fond of saying.  Such was his brilliance as a wordsmith, corrections were in limerick.

Back in the day, the Barkly Street office was smoked-filled.  Angela describes herself as “a little, timorous cadet”, who’d punch out articles on a manual typewriter, one paragraph at a time, on slips that would eventually find their way to a typesetter.  “Stuart sat behind at a desk with a spike.  ‘Don’t say it; write it,’ he’d growl.  Stories that weren’t any good got spiked.  You were terrified … you’d hand him your piece, stories on slips with a glider clip – almost wetting yourself waiting for some reaction.  If you heard Stuart go, ‘Hmmm …’, you knew he liked it.”

In the ’80s, the Western Times would break away from Fairfax’s Footscray Mail.  Angela wrote a weekly column about the environment for the new publication, which she part-owned.  At her pinnacle, Angela was a feature writer for the Sunday Herald until the day came where demands of juggling family and journalism became too hard. 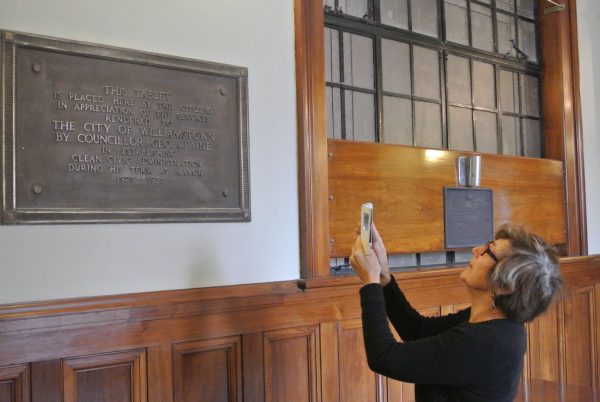 Talk to Angela and you discover things you’ve missed – but wished you hadn’t.  She walks me to the Williamstown Town Hall.  I’ve been to many events here but never before have I noticed a faded brass plaque tucked away in the foyer that Angela shows me.  It commemorates Ada Cambridge, an early nineteenth century local author who once lived nearby.  To this day, Cambridge’s legacy is enjoyed by emerging writers and poets; the Ada Cambridge writing awards are a popular fixture in Williamstown’s literary festival.

Look for Angela’s literary-lover fingerprints and there they are, close by.  The rebuild of the adjacent Williamstown library, supporters of willy lit fest, are one of a handful of accomplishments this councillor is most proud of.