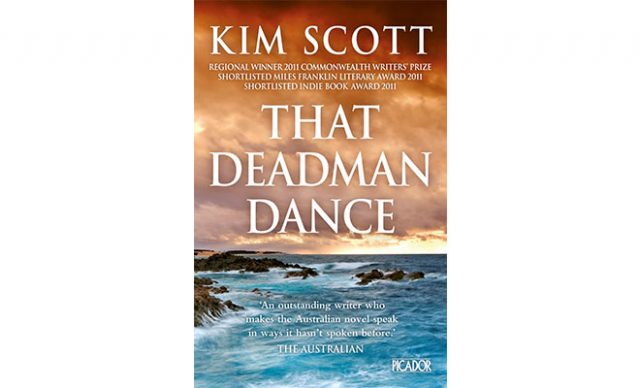 This year marks the tenth anniversary of Kim Scott’s award winning novel That Deadman Dance. Having previously shared the Miles Franklin literary prize with the inimitable Thea Astley (for their novels Benang and Drylands respectively), Scott won his second Miles Franklin for this impressionist tale of his Noongar ancestors’ first encounters with itinerant European adventurers, American whaling ships and the first British colonists.

We are introduced to a young and optimistic Bobby Wabalanginy. His name, impossible for the various newcomers to pronounce, poignantly means “all of us playing together”. Highly intelligent and wanting to be the centre of attention, Bobby chooses early on to befriend the white colonists and acts as guide around the stunning and treacherous landscape. Having renamed his country as Cygnet River Colony (a fictional renaming modelled on Albany in Western Australia) the settlers find Bobby and the members of his clan to be useful, tolerating the various misunderstandings. The colony’s first leader, Doctor Cross, holds the Noongar in the high regard. Without their help the colony was sure to fail. Having watched his uncle Woonyeran shares stories of the land with Cross, their virtuous relationship is the point of reference for Bobby’s enthusiasm for helping the settlers.

Echoing the storytelling of his ancestors; the author’s choice of a non-linear narrative follows the rise of the colony, now renamed King George Town, to an older and wiser Bobby, who is now forced to watch on from a distance as former childhood friends treat him like a performing clown. The painful realisation that the settlers, whose actions Bobby repeatedly defended to his increasingly agitated tribe, were never interested in learning his culture; is ghastly illustrated in a scene where the disinterred remains of the good Doctor Cross are destined for a Christian burial while literally leaving the bones of Woonyeran, whom the doctor was buried beside, to the dogs.

His country forever changed by livestock and European cropping methods, Bobby’s viewpoint shifts between the various characters who now call his land home. His voice is often diluted through second and third person narration, the shift a representation of the disdainful attitudes of white colonisers towards first nations people. The evils of dispossession of aboriginal land is far more subtle in Scott’s novel. More lyrical and poetic, there is a sense that the depth of some characters is sacrificed for the descriptive gestures of Bobby’s movements and dances and the wild beauty of the undiscovered landscape the colonists’ are witnessing. However, what I find to be the real tragedy of this novel is the fascination the Noongar had for the “horizon people”. Having chosen to invite the visitors onto their land, they never suspect their identity, or their land, to be compromised. This story captures that spirit and describes it beautifully.