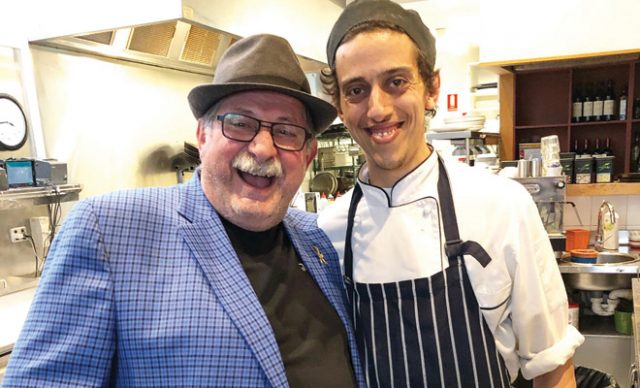 If you had wandered down Victoria Street in Seddon on Sunday 7th July, you would have stumbled across an enticing scene – one in stark contrast to the grey Melbourne sky, and the dreary hustle of people darting across the road in a futile attempt to avoid the raindrops.

Instead, nestled within the cosy walls of Italian restaurant Casa Di Tutti was a private table set for a group of 22 privileged guests… the room was warm and fragrant, the wine and conversation flowed, the food was a hit, and laughter rippled down the street… the occasion? A long, lazy Italian lunch to honour the late, great Antonio Carluccio.

Casa Di Tutti owner and head chef, Domenic Zema designed the event to pay homage to Carluccio, after his passing in 2017. Zema had the pleasure of crossing paths with Carluccio several times throughout his career, and fondly thought of him as a professional idol and mentor. Carluccio was known as ‘The Godfather of Italian cuisine’ A chef’s chef, he was widely respected by all in his industry, known and appreciated for taking the time to invest in younger chefs working their way up through the ranks. He had great passion for the craft of cooking, and did it all in his own cheerful way, implementing his motto ‘MOFMOF’ – Minimum of Fuss, Maximum of Flavour.

Zema was sure to adhere to that ethos for this luncheon, painstakingly creating the four course menu with great care and attention to detail. Kicking off the festivities were prawns with garlic, chilli and oil – light and flavourful, it was a perfect teaser for the tastebuds of what was to come. Entrée consisted of Cannelloni stuffed with mushrooms with taleggio and truffle sauce, topped with lashings of freshly shaved truffle, followed by the main course of slowly braised Osso Bucco with creamy saffron rice and gremolata.

Rounding off the menu was a zesty ricotta and lemon torte, to finish off on a perfectly balanced, sweet note.

The luncheon doubled as a fundraising opportunity for Ovarian Cancer Australia. Cleverly capitalising on the most opportunistic time – immediately following main course, when the guest’s bellies were full and their cheeks rosy from wine, special guest Vince Garreffa – a long time personal friend of both Carluccio and Zema, and a legend in his own right – regaled the table with cheeky stories and anecdotes from Carluccio’s life, and then led a hearty auction to raise much needed funds for ovarian cancer research. Ovarian cancer is the eighth most common cancer affecting women in Australia, and the 5 year survival rate is less than 50% – meaning we are losing too many mothers, sisters, wives, daughters and aunties. A fact Zema knows all too well, as his own mother passed away from the disease in 2011.

Zema provided a fabulous opportunity for us to learn and reflect on the wonderful life of Antonio Carluccio, all whilst raising over $1500 for Ovarian Cancer Australia, enjoying delicious food and wine, but most importantly, it allowed 22 people to arrive at Casa Di Tutti as strangers, and leave as friends.