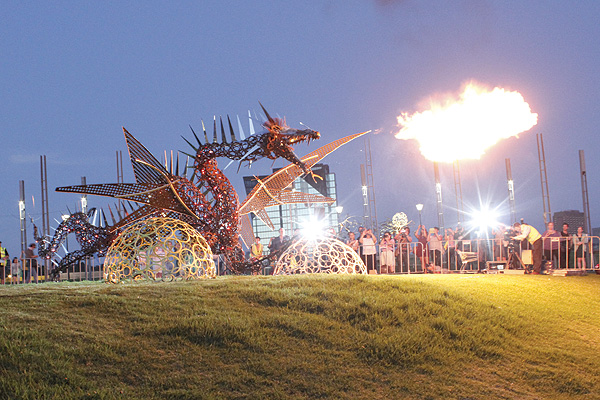 We are sitting around one of West Footscray Artist, Sean Diamond’s fire pit creations in the back yard of his rented home & studio, a rambling block with a 1960’s mansion that for the past 5 years has been ‘going to be knocked down’ to make way for more apartments. Sean has been given another 6 months but hopes it’s longer. Looking around at Sean’s workspace with the kids not far off chasing chickens, it’s hard to believe Diamond used to have a 4WD Jag in the garage of his 35th floor apartment. He flew first class to London, spent weekends on super yachts and had holidays in Hawaii. He didn’t think twice about hiring a Maserati or Lamborghini for the weekend.

But 8 years ago he decided to swap all that for the life of an artist or as he puts it, “many years of worrying about having to pay the rent!” He now works from his home studio where he helps his wife Loretta, in between welding and selling steel sculptures, with bringing up their 4 young children. So why leave behind a seemingly wonderful world where paying rent wasn’t a problem?

After 20 years working his way up the corporate ladder, Sean decided to give it all up to be an artist, something that he’d always yearned to do. I asked him when he realised the corporate lifestyle wasn’t for him.

“The day I walked in the door and took the job and every day after that… I went into the corporate world so I could learn about what the world was about I reckon. So I could get an education. I didn’t get one at Uni with my Marketing degree”.

Overhearing our conversation, Loretta, Sean’s wife, walks out with Reggie, the couples youngest, on her hip.

“No, you thought that organisations were going to save the world!” she adds. Sean laughs, “Yeah, I did, I was naïve. But then I went to China, to the slave factories, where you’ve got 30,000 people making garments in one factory, all living there, eating there, can’t leave because of a barbed wire fence. In fact there was a cue of 100 people out the back, trying to get in, to get a job!

We were living in Hong Kong; I used to travel around like James Bond, with my passport, my phone and my credit card. I’d visit four countries in a week and that’s all I’d have on me… when Loretta got pregnant, I said, “that’s it, were leaving… we’re not having a baby in this pollution. We’ve got enough money saved up for a year or two, let’s go. So we came back here (Melbourne) then of course, everybody is like, well, what are you going to do?” He laughs. “So what are ya gonna do, so what are you gonna do, so what are you gonna do? So I bought a camera and a ute and started taking photos at 5am, 10am, 11am, 2pm, every time of the day, I took photos of everything I could, all the ships, all the sunsets and I got so bored that within six months, I came up with some light paintings. Tossing the camera around like a maniac until I created art. I kept breaking my camera and Canon kept fixing it for free. Everyone’s so delicate with their cameras. Then I realised, I had an art product! I’d go on country trips with my mate Tim and pick up bits of steel for fun. He was still working as the head honcho of a bank, I was his executive mate and now I was ‘unemployed in Greenland’. So he goes, ‘What are you going to do?’ I said, ‘I’m going to be an artist’, he goes, ‘hang on a second, a what? You know the difference between an artist and a pizza, don’t you? A pizza can feed a family of four!’

“So I gave him a light painting and he took it straight down to an art gallery in Collingwood and said ‘My mate reckons he’s an artist, have a look at his stuff and tell me if you think its art’. The gallery owner looked at a couple and he said, ‘Yeah, I get it. Invite me to your first opening.’ And from that moment, that was it, I’d convinced my mate that I was an artist! First trick of the game done!”

So I did a show, light paintings, some really big ones, sold a couple of bits but then Miele came along and asked me to fit out all their showrooms across Australia and NZ with light paintings! But I still had to work with my brother for a year as a builder’s labourer out in Glenroy. It wasn’t until I was 8 years in (as an artist) that I didn’t have to go and work for anyone. That was only two years ago.”

With the light painting not paying the bills, scrap steel sculpture was to become Sean’s saviour. It was to become, in his own words, “My thing.” On a walk through tour of Norstar Steel Recyclers one day with Paul the owner, Sean pointed into a pile of scrap and said,

“There’s a dragon in there”, Pauls response, ‘You better make it for me!’”

Sean built the dragon on site, it took him 3 months.

Sean’s wife Loretta tells me about the early days when Sean first started to weld and experiment with scrap metal sculpture.

“He turned the backyard into a steel yard; did he tell you that bit? He started collecting all this stuff, from around the streets and hard rubbish. Before we knew it, we had all the junk in our backyard in neat piles. “They were good piles”, Sean interrupts. “I remember, I made a few things and had an open day, a gallery opening. My brother in law came, he looked around and said you’ve gone mad mate, you’ve given up your million dollar lifestyle for this’. Just yesterday he said, ‘You guys are living like kings! I used to say Sean was mad!’ So after I’d built a couple of dragons, I was standing there one day going, OK, I need to come up with something, something that defines me. And 6 months later I’m still standing in the same spot looking at my navel. No shit! That’s when I started making balls. I spent 3 years out there, my hair grew long, but I learnt my trade there, buried in it, learning what I could do with that stuff!”

The “stuff” Sean talks about is scrap metal, any metal, cars, buses, washing machines, industrial vats and machinery, all shredded and sheared through what Sean called his “Art Makers” at Norstar.

“I’m standing there one day, and I’d made half a ball just out of messing around, I’d made half a ball and I didn’t even know how it got there! I thought if I keep going I’ll make a whole one! I didn’t stop at one of course. After I’d made about 50 of them I thought I’d better take this out into the world, see if anyone wants to buy one. That’s when everything really changed. I’ll tell you what though, to get them out there I had to do things like White Night for virtually nothing the first year…thousands of hours of work really, that’s what it takes.”

Sean was commissioned to install his metal balls and sculptures for White Night 2014 and 2015 in Melbourne. At this year’s festival, Sean with the assistance of Stephanie Selig of Flame Effects Australia, created The Crucible which included a 30ft fire-breathing steel dragon which sat on the hill at Birrarung Marr, roaring over the crowd.

“Now, wherever I go, I put smiles on people’s faces, in the corporate world everywhere I went, people grimaced at me. Before I left, I trained up a young guy for my job. For 6 months this guy shadowed me. When I resigned I said, give him the job. I’m friends with him on Facebook now and I can see what life I could have been living.”

We go into Sean’s study to have a look at the Facebook page and see photos of his successor dining in a Hong Kong steakhouse and relaxing on a super yacht. We both laugh.

Currently Sean keeps busy with large scale commissions and recently completed another dragon for the Buddhist Great Stupa of Universal Compassion in Bendigo. I ask if he considers himself a commercial artist.

“Commercial artist, what do you mean? You have to sell stuff! I make dragons right, if someone wants a dragon, I’ll make a dragon!”

Having made the successful transition from corporate high-flier to full time artist, I ask Sean to share some insights on what makes a successful artist.

“Find your thing. I found my thing with the steel for sure, so you’ve got to be able to find your thing. And then, if you think working for someone else is hard, you have to work twice as hard as that on your own thing. I’ve had to work harder than I did in the corporate world but it’s so much more fun. The best advice I’ve heard, “Do what you love and in 20 years you’ll be fine”.