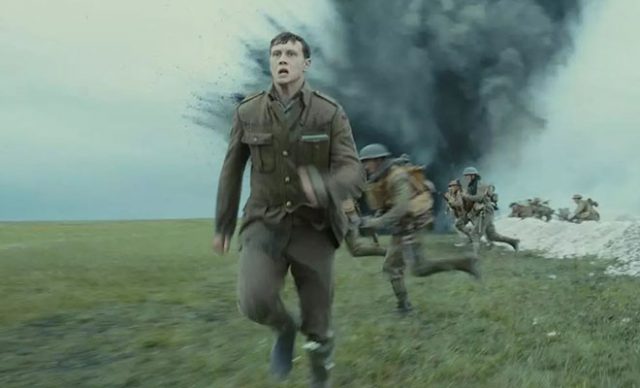 This movie is really a piece of art. If you did not know there is something special that really makes this stand out – not only is it a realistic and historic film, but it is a one-to-one account of a soldier’s journey in the western front during World War One.

When I say one-to-one, I mean it has been filmed to seem like a single continuous shot. I suggest you find the “making of” video and you will really appreciate the lengths that were taken to achieve this. What I really enjoyed about this movie was how realistic it was, there were not hyped up action scenes with guns blazing – not saying it is boring because the director has somehow found a perfect balance in its creation. The journey is about two men who get tasked with finding and stopping an attack of a friendly unit before it goes over the top of the trenches and into a trap.

Because of the way it was filmed the audience gets to see the landscape of the western front, it is like one big panoramic shot. It is an intense storytelling because of the twists and turns their journey takes. I know that this movie will win an award for cinematography 100%.  To summarise this film I would say that it is perfect in what it is trying to achieve. It’s a good way to get a snapshot of what the western front was really like, an educational piece of film that you can really enjoy and take heaps from it.