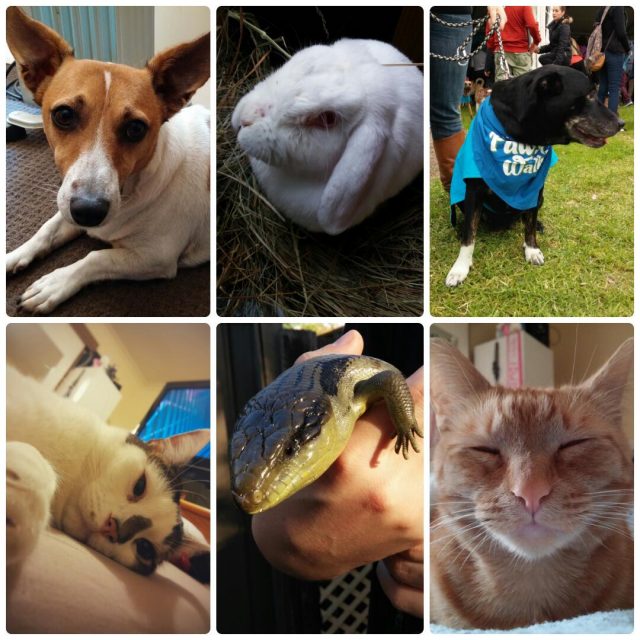 My family has always had a lot of pets at one time.  There has always been a variety of animals at my house whether they are furry, scaly or feathery.

The oldest are our two dogs. My Jack Russel named Busta. He took forever to house train, so my parents would often get mad at him. We adopted him from a home as a puppy when I was thirteen, we’ve had him for just over five years now.

The second dog is my mums, her name’s Mika. She is a senior Staffy cross Lab. We adopted her from a dog shelter almost two years ago, sometimes I think my mum is a bit obsessed with her. Next are our three cats.

The oldest is named Gizmo, he’s black and white and is known for being antisocial and mean to our youngest cat, Tigger. Tigger isn’t the smartest cat and occasionally ends up peeing on people’s beds, so my mum isn’t really a fan of him.

Then we have Tigger’s mum, Zoe. She’s a small cat with orange fur just like her son. She and Tigger will always scratch at the door when they are hungry.

My sister has a large white rabbit named Frisky and my brother has a guinea pig named Jet. Jet is the boy and Frisky is the girl. Jet is easily noticeable by his Mohawk but he’s very shy. Frisky is all white with pinkish-red eyes, she’s the biggest rabbit we’ve had, and we have owned quite a few.

Lastly we have our two blue-tongued lizards. Mine is called Piff, because I named her when I was a kid. We actually found her in the front yard of my dad’s old house, having a fight with my mum’s last cat Jaffa. It took a while for her to become used to being in the house, she used to hiss a lot and as a kid I was scared she would bite me. The only way we found out that she was a female was because she gave birth to about 6 baby lizards a while later. The other lizard is my sister’s and she named her Karma. My dad found her and brought her to the house along with another lizard that was my brothers. He named him Doom, but unfortunately he passed away. Karma is a bit bigger than Piff and was a bit aggressive at first, but they are both good house pets now, except when they poop on people’s beds.

My dad’s house has even more pets.

They have three dogs, a staffy named Toby, and two small dogs named Mia And Pharah. They have one bird that likes to make a lot of noise – I’ve never learned its name. They have way too many cats, I’ve never counted them all but they seem to always come and go. I do remember a few, Chino is my favourite, he is always begging for pats and is a dark grey colour. We have never had less than four pets at one time.

As far back as I can remember we always had a house full of animals.

COPING WITH THE LOSS OF A FURRY FRIEND