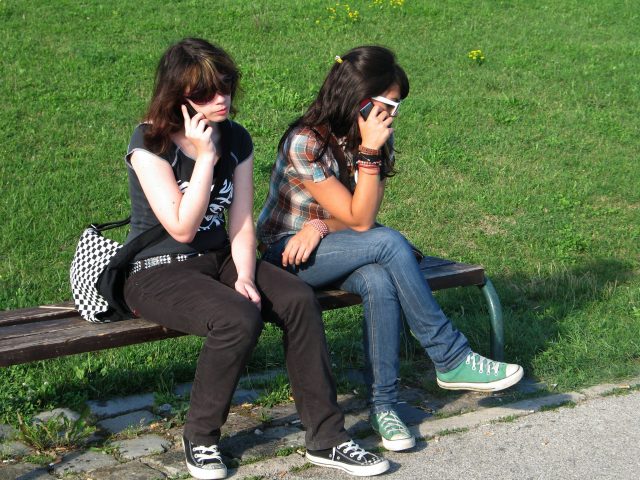 It is very rare to hear someone say; “The first time we spoke was in person”. Nowadays most people hide behind their computers or on their phones and use Facebook to talk to their friends, instead of meeting up in person to have a conversation. Even when having a conversation with someone sitting next to you, you still can’t talk to them without them either talking or messaging someone else on their phone at the same time. Yes in a way we talk more to people than ever before but it is all through what we call “social” media. We aren’t as social as before, they brought out all this technology with social media on it, which we rely on too much to get us from day to day.

Before social media advanced to what it is today, we went out and hung out with friends all day and had face to face conversations with either one, or had a group conversation with one another. We’d go home and know that when we’re at home, it means that it’s family time. There was no mobiles to randomly talk to someone and ignore the family.

I did a quick survey on ‘Name one thing you can’t leave the house without’ and about 60% said their phone. So even after they decide to leave their house and be somewhat social they still need their phone to communicate with others. I can understand for emergency cases but most of the time it is so they can keep looking at Facebook in case the conversation they are having is boring. It could also be so they can play games on their phone while they wait for someone.

When seeing someone we know out on the street, even then it’s a quick “hey, how are you?” and our usual response is “Oh I’ll message you on Facebook or ill text you,” but… do they ever do it. No.

We can see it when we’re walking around the street, everyone is walking to where they have to go but they are looking down at a phone, possibly bumping into things because they aren’t really looking at what’s around them and what they are missing out on. If we all just put our phones down for just a couple of hours and take time to talk to people face to face and enjoy being out of the house, we would realise that social media is not that social at all.