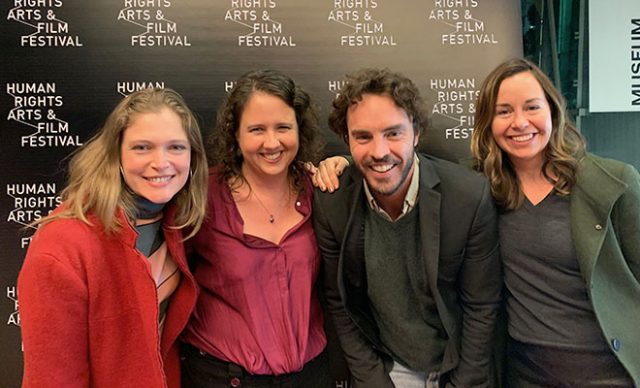 A Human a Month
Due to an alignment of the stars and planets – or at the very least the sharing of a common goal to promote the people of the inner west and their pursuits – Humans of SKY is partnering with The Westsider to bring you more stories about…. you!

If you really understand what’s happening with climate change, I can’t understand why you wouldn’t do everything you can to stop it. That’s really my driving force.

In 2007, after reading the book Climate Code Red, it hit me like a ton of bricks. For six months, I was just incapacitated. I walked down the street crying, not knowing what to do. Then I realised, even though it’s scary, we can fix it, and I thought about my kids asking me in the future ‘You knew and what did you do?’ I didn’t want my answer to be ‘Not enough.’

I’ve always been passionate about environmental sustainability. Back in 1995, after my first boyfriend broke up with me, he said ‘Oh you’ve changed me. I now take my bag to the supermarket.’

Australia has the most wind, the most sun, the most waves, and we could be harnessing and exporting this renewable energy, but we’re behind the rest of the world. It’s embarrassing. To change that we have to engage our MPs. One MP once said to me in 2018, ‘It’s nice you paid a visit. I’ve received over 5,000 emails about animal exports, and we’re doing something about it. Do you know how many people wrote to me about climate change in the last few months? Not one.’ If we want our politicians to act, we have to let them know.

I was born in Canterbury, England but grew up in London. I came to Australia when I was six, as my parents are from Australia. Mum was a school teacher, and Dad is a moral philosopher. I was a bit of a loner in school and was bullied due to my English accent. Kids thought I was posh. I was called ‘fat lips’, and was teased throughout primary school. Being bullied was a formative experience. Dad told me not to bully back, and change myself for other people. He was more worried about my moral development, instead of making me happy.

I grieve a lot about climate change, but in another sense, I feel deeply content and happy, as I have a strong moral compass and a sense of where I fit in the community.

That came from my parents’ support during that time. But I also realised climate change is going to make those issue worse. For example, if all the ice in the Himalayas were to melt away, a billion people who rely on melted water in Spring and Summer would no longer have access to water. That will create war, human rights abuses and refugees. Coming to the Western suburbs was the first time I came to this side of town. I had grown up in Gardenvale and the Bayside suburbs, but it was very boring. There was a lack of cultural diversity.

Community is really important to me. It’s important to support the local schools and be really active within the community. That’s a core value for me.

Before getting into Climate for Change, I was on maternity leave with my oldest. I had already decided I wanted to pursue my passion for sustainability and made the decision to run a green cleaning company. I was training cleaners to suggest small changes in their homes, such as introducing composting for their waste. We cleaned their homes with green products, and I likened my staff to Green Cleaning Coaches!

For the first three years, at Climate for Change I didn’t earn anything, now I take a small salary. I worked out over the weekend, I’ve probably foregone over $300,000 in wages to do this. but it’s never about the money.

I don’t regret it at all, but I do think how long I can sustain it for.

This is an edited version of a story that can be read in full at www.humansofsky.com.au
Follow facebook.com/humansofsky