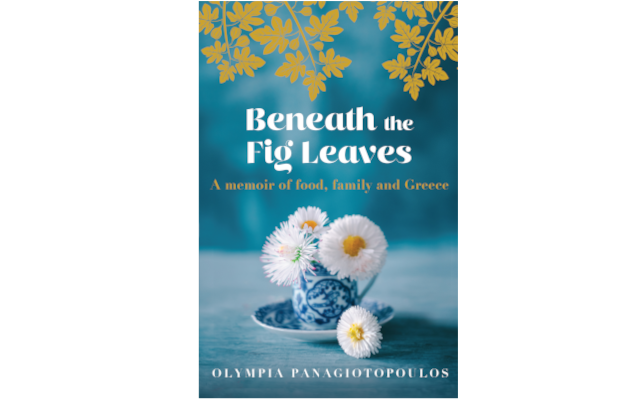 A Memoir of Food, Family and Greece

In 1955, Giannoula and Fotios Panagiotopoulos left Greece with the dream of providing a better life for their children. Australia, it was rumoured, was a land of opportunity where hard work brought reward. Leaving behind family and friends, they set off to make a new home on the other side of the world.

Half a lifetime later, under the shade of a fig tree and in the dappled Melbourne sunlight, Giannoula’s daughter Olympia pens a portrait of an era, a compelling insight into the lives of migrant families and what it means to live a life shaped by dualities of culture, language and landscape.

Against a backdrop of mornings in the garden and afternoons in the kitchen preparing generations-old recipes, Giannoula shares tales of her homeland and journey: stories of childhood, war and love. An evocative exploration of the ties that bind, Beneath the Fig Leaves weaves an irresistible tapestry of family, food and history to stir the heart and senses.

My Greek-Australian childhood unfolded in the suburb of Footscray in the sixties, but it became entwined with tales of the village of Chrysochori, Greece, where my parents were born. My parents and four older siblings migrated to Australia in 1955, leaving behind dear friends and family.

A few years later, I was born. My parents fed me with food and story. I spent my early years eagerly listening to their reminiscences of their life in Greece; their stories became the heartbeat of my life. Greece became a source of fascination for me – a mythological place from which my family had sprung like Aphrodite from the sea. The dream of knowing it was unrelenting. I would come to ache for it so much that one would think it was my roots pulling me back into the earth of the village in Chrysochori.

In the summer of 1981, my dream was realised: I spent three magnificent weeks in the Peloponnese with my parents. As I experienced the beauty, history and wonder of Greece, I was struck by the realisation that my parents, and many like them, shared the spirit of their ancient ancestors. They, too, were heroes and warriors, visionaries whose courage and tenacity had spread to other lands that were now richer for having known them.

In the spring of 2009, while sitting beneath the fig tree in my mother’s garden, I had the most extraordinary feeling, like something was trying to get my attention. It was as though the garden itself was calling me. There, amid the green splendour, Beneath the Fig Leaves took seed. Woven from my mother’s village tales, stories of my childhood and recipes from my great-grandmother Konstantina and grandmothers Olympia and Alexandra, this memoir pays tribute to my Greek heritage and my parents’ journey.

Beneath the Fig Leaves is available in bookstores and online.

Olympia Panagiotopoulos, Beneath the Fig Leaves