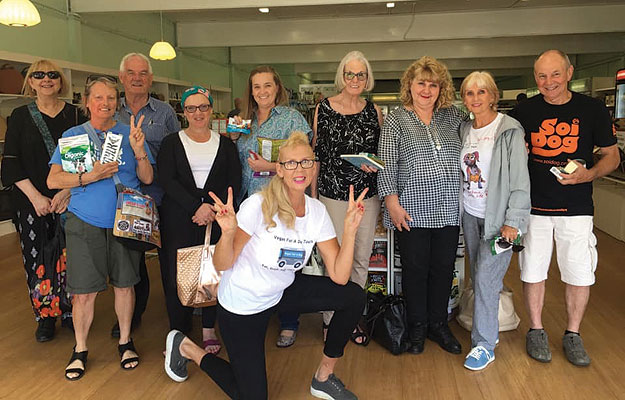 On a glorious Melbourne summer Sunday afternoon, Yarraville is a buzz with people and families gathering at popular outdoor cafes. Both Ballarat Street with its pop up park and Anderson Street with the new roof top bar at the Railway Hotel are echoing with laughter. The atmosphere is one of happiness. There’s such a huge variety of yummy food available now that suits a multitude of tastes.

One shop in particular seems busier than Flinders Street station, with a constant stream of happy customers coming and going carrying small containers of plant-based milk, frozen yoghurt desserts with scrumptious homemade toppings. Everyone knows this place simply as Goje. They don’t need to advertise that its vegan, everyone just understands and loves it.

If you sit and watch from a table indoors, you’ll see people of all ages coming and selecting from the flavours and putting on their favourite toppings, paying and leaving and not even getting the front door open before a spoonful of this delectable dessert reaches their mouth. It’s amazing to watch the amount of people gravitating towards a plant – based diet these days.

Farmers still like to stick the boot in by calling vegans extremists but would they say that to a grandmother of 70 years who has decided to leave animals off her menu? I doubt it.

People are still slow-ish in accepting a vegan’s lifestyle but many are very supportive. A Roy Morgan poll from 2016 recorded that 2.1 million Australians (and rising) were vegetarian with many of them now living as vegans.

Vegan For A Day Tours help people support the vegan in their lives, which could be a family member or friend or employer.

Everyone these days knows someone who is vegan. These tours are specific about helping you understand how easy it is to go vegan and to take the mystery out of shopping and cooking vegan. A minimum of 9 people are taken in a chauffeured Mercedes mini bus to all of Melbourne’s best vegan businesses, stopping for breakfast, lunch and afternoon tea and shopping. In between there’s various samplings of vegan cheese and wine as well as a gift bag to take home.

The tour goes to over 9 different suburbs across Melbourne including Altona and Ascot Vale and of course stops in Yarraville too for Goje.

For more about the tour visit:
www.veganforadaytours.com