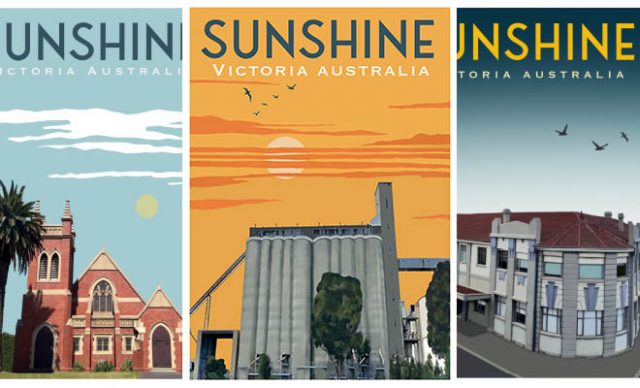 I’ve spent years traveling to Sunshine, whether it be to catch a film, go roller-skating with my kids or grab a burger from Sunshine Social. Twelve years ago (for a few months), Sunshine was my refuge following a separation, and visiting recently to create some westie posters reminded me of how much I was grateful for what the suburb offered.

Home to one of the most diverse populations in Melbourne and only 12kms from the city, Sunshine and surrounds is a place thousands of people proudly call home. A wide range of restaurants includes some of Victoria’s best banh mi, Vietnamese pho, African dining and a choice of excellent Chinese yum cha.

According to the Victorian Government, an infrastructure investment of over $20 billion in Melbourne’s west is underway, with the Sunshine Precinct and a transport superhub central to the investment. This investment, the expanding business precinct and beautiful period homes have long been a draw card for families moving to the region.

The City of Brimbank offers great resources for local creatives. The Creative Brimbank platform offers artists and community the opportunity to participate and collaborate in different artistic experiences, whether it be performing or visual arts, workshops, festivals and events.

Not far from Sunshine is the Bowery Theatre in St. Albans. The Bowery Theatre is named after the late artist, Leigh Bowery who grew up in Brimbank. Leigh Bowery was one of the most influential international arts figures of the 80s and 90s. A celebrated fixture of the fashion, nightlife and avant-garde scenes in London and New York, he was known for his flamboyant get-ups, larger than life personality and bold performance art.

After I started creating my posters celebrating Melbourne’s west, I was keen to explore Sunshine and surrounding areas for its striking architecture, industrial landscapes and places loved by the community.

I started with the John Darling Mills in Albion, arms stretched high over the high chicken wire fence with my camera to get a good angle of the incredible mills. A few weeks after that I visited the Sunshine Silos, standing on the plush lawns of the adjoining oval taking photos of the impressive structure.

Following that I visited the old H.V McKay head office at 2 Devonshire Rd. The building was really difficult to capture as I knew of its historical significance. I have just completed two new artworks, the H.V McKay gardens and the H/V McKay Sunshine Church. Another design featuring St. Albans’ Errington Reserve is in the works.

It’s been a privilege to learn about Hugh Victor McKay CBE (21 August 1865 – 21 May 1926). He was an Australian industrialist who is known for heading the company that developed the Sunshine Harvester, arguably the first commercially viable combine harvester. He subsequently established the Sunshine Harvester Works, which became one of Australia’s largest manufacturers of agricultural equipment.

What I really love, is that in 1907, the residents of Braybrook Junction successfully lobbied to rename the suburb Sunshine. The plant rapidly expanded and at its peak employed nearly 3000 workers. In 1909 the Sunshine Gardens were developed to provide an amenity for the employees of the Sunshine Harvester Works.

The eight-acre Gardens were located alongside the factory and incorporated recreation facilities and popular horticultural displays.

Originally the Gardens included tennis courts and pavilion, a bandstand, a bowling green, a substantial house for the head gardener, a conservatory and associated works areas. Under inaugural curator Thompson (1909–27), and curators James Willan (1930–39) and Harold Gray (1939-50), the Gardens developed a reputation for its chrysanthemums and dahlias, attracting workers and their families, as well as other local residents

HV McKay lived in Sunshine, was founder of the Church and funded the education of local families also setting up the local school. Head Gardener Harold Gray was choir master of the Church. Plants grown in the Gardens were given to locals. ANZAC day commemorations were held there. During the 1918 flu epidemic church services were held there. The church continues to offer services today.

Brimbank lies within the area occupied by the Kurung-Jang-Balluk and Marin-Balluk clans of the Wurundjeri People also known as the Woiwurrung language group, who form part of the larger Kulin Nation. Other groups who occupied the land in the area include the Yalukit-Willam and Marpeang-Bulluk clans.