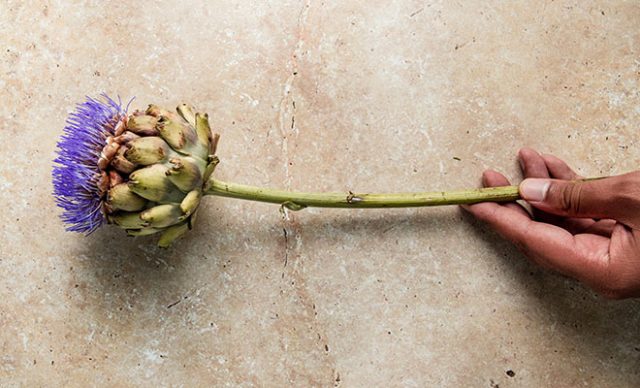 You don’t have to venture far in the west to find Scotch Thistles. The thorny bushes sprouting hairy purple flowers are in abundance if you venture just slightly out of town down Geelong Road or the back-blocks of Altona. You may know them as the floral emblem of Scotland but did you know they have a close cousin which is edible?

You have probably seen these spiny little vegetables at market and not known what they were or how to prepare them. You may even have ordered them on a pizza not realising their origins or made the connection to that spikey little green globe at market.

The globe artichoke is a popular vegetable in the Mediterranean and particularly Italy, which is why it has found its way onto pizzas after a long history of cultivation by the Greeks and Romans. Most people look at this odd spiny “globe” and don’t know where to start. Truth is they are not as hard to prepare as you might imagine. They can be boiled, pickled, BBQ’ed or chargrilled.

For a simple overview of how to clean and cook them there are a myriad of tutorials on You Tube demonstration the basics of preparing and steaming, or even stuffing them Sicilian style.

A chef who loves his vegetables is Matt Wilkinson so maybe his take on artichokes in salad is a better starting point… Matt himself introduces a favourite recipe from his book Simply Dressed Salads:

“I truly love this dish. There’s a bit of work in preparing and cooking the old globe artichoke, so if you think it’s too hard and puts you off making this salad, go out and buy yourself a small jar of preserved baby artichokes instead – I would if I was cooking at home. This salad is also lovely with a simple grilled fish like mullet or albacore tuna.”

A handy hint if you aren’t sure where to start is to ask an expert. Talk to Italian growers Farandas next time you come to the Slow Food Melbourne Farmers Market at Spotswood – with a market garden in Werribee and family traditions of growing, cooking, pickling and preparing they know every trick in the book. They will sell you a jar prepared by mother Rita or try it yourself. Conquer your fears, learn something new and have a crack …. It is seriously easier than you think.

STALL HOLDER SPOTLIGHT: THE PROOF IS IN THE PUDDING