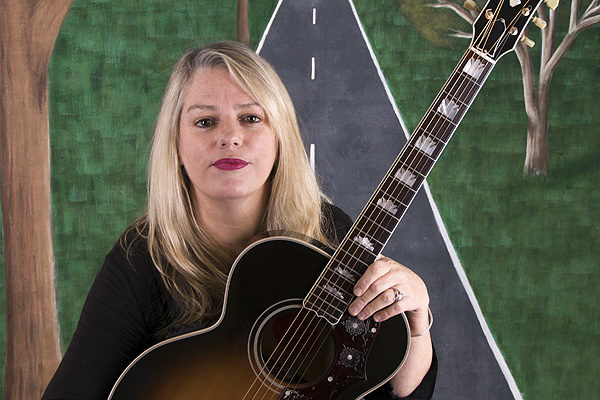 Singer, songwriter and musician Rebecca Barnard’s move to the western suburbs over 25 years ago coincided with one of the most exciting  times in the Australian independent music scene. Three years in a row her band’s songs featured in the Triple J Hottest 100 and they toured nationally. This month Rebecca talks about the road she has travelled, her new album and a few things in-between.

“My dad was a jazz musician, Len Barnard, he was a drummer and his Uncle Bob was a trumpet player. It was traditional jazz and they were kind of big so it was always going to happen. I grew up watching them, it was happy, happy music, not always but people would come around for jams and we’d go to pubs with dad. They played at the Southern Cross when it was quite swish.

I’ll never forget going there, I was about 8 and the waiter brought me a little souvenir, a billy with a little stuffed koala in it because I was the youngest, you know I was 8. It was called the Mayfair Room. It had white tablecloths and little lamps.”

“I started playing music when I was about 10, dad bought me a guitar, and I had a few lesson. I can drum, four on the floor steady rock beat quite well but that’s it, if I have to do a fill it’s like for someone who’s really drunk or something.

I started writing songs when I was about 12 but pretty bad, you know indulgent. The first one was about a blind girl and how could she survive, I might still have the words to that somewhere.

In the 80s I started working with Stephen Cummings as his backing singer. I worked with him for 10 years and it was towards the latter part of that, the early 90s that Shane (O’Mara) and I formed Rebecca’s Empire and that’s when I really started seriously songwriting.

I’ve always loved singing and I’ve always gravitated to harmony even as a kid so to sing harmonies for someone was right up my alley. I loved it and Stephen’s such a great singer songwriter that for a while I thought there’s no  point trying to write songs because there’s just too many incredible songwriters and then I thought ‘awe fuck it!’, I’ve got something to say.

I did lots of vocals on Paul Kelly’s records in the 90s and actually Rebecca’s Empire did a national tour with Paul, that was why we were riding the wave and you know it was fantastic.”

“Because I’d worked with Stephen for so long, I made lots of contacts with Polygram, which was his record label and it got to the point where we’d be doing shows and people would shout “LET REBECCA SING A SONG”, it was nice.

We got signed to a record label called Eternity which was a little offshoot of Polygram and released a single and Triple J picked it up. I knew it was good but I didn’t expect to get nationally known. I mean they put us in the Hottest 100 three years in a row which was just unbelievable. That’s how we got the deposit for the house. In those days you could still make money from music.

We were with a record company so in those days you were sort of hand fed, but there were pitfalls also having a  record company, they owned it, they had a lot of control but because we were successful I suppose they put more energy into it until we made the second record and then everything went pear shaped. It was great fun but I had just had a baby (Harry) and I was a little bit distracted. It was when Indie music was coined. The whole genre it was new and we were part of it. Harry would tour with us. My mum would also come and look after him. I’d get home to the hotel from the gig with my bosoms bursting with milk and I’d feed him and it was lovely.

“We came to Yarraville in 1992, we were trailblazers. People would say things like, ‘We’re going to have to pack a lunch for our road trip to come visit you’. At that time we were doing the Big Gig and Vizard (The Tonight Show) on TV. I did lots of ads, one night a week I was on the ABC, four nights a week on The Vizard Show and then the Big Gig one night a week, so yeah, we were making a good living. It was the heady late, late 80s. That was pre Rebecca’s Empire, just. The band was me deciding not to do all that stuff and doing something more self-satisfying I suppose.”

“The band officially broke up in 2000. I was over it, I just wanted to be at home, be a mum and feed the chooks, get back and do all those things for a while. I took a few years of not really doing much, still doing gigs but with other people. I started writing songs again in about 2003 and in 2005 I released my first solo record, ‘Fortified’. My dad died just before I’d finished the record. That changes you a lot and I wrote this song called ‘Everlasting’ which is what I called the next album because of his legacy and he’s the reason I’m doing what I’m doing.”

It’s available at The Sun Bookshop in Yarraville, Basement Discs or on Spotify and iTunes. I’d prefer people bought a hard copy CD. I wasn’t going to get Spotify because I resent how little the artist makes. If it was any other industry, it wouldn’t be allowed. There’d be some force acknowledging and trying to rectifying it. Basically what you’re doing now is taking every avenue you can to be heard.”

“The big part is performance which is the good thing, it’s the bit I love, the whole reason I do it. Communicating with the audience and just having that interaction. I love being in a band with other people where you’re actually making chemistry creating music together. If you have a really good show it’s incredible, there’s nothing like it. It can be hard, most musicians are depressive or have some little vague form of mental illness or Asperger’s. It’s that whole thing with creativity and where does it come from which is often a darker place than a lighter place so dealing with other musicians can sometimes be fraught, but then that’s like anything you do really.

I give the other band members heaps of scope because that’s what makes it, that chemistry. I play with the same people a lot and we have a thing. This new album which I recorded with Michael den Elzen, we wrote a lot of these songs together and he plays the majority of instruments like drums, bass, cello, guitars, we even had some tubular bells, oh I played keyboards and guitar, but he’s virtuosic. He did all the music for that show ‘Bush Mechanics’ and does all the music for Rebel Films, they’ve done lots of stuff.

Billy Miller and I, another local, we wrote a song about women’s footy, because Brian Nankervis needed a song for an old style radio play on ABC Radio afternoons. We’re going to pitch it to the AFL. Syncing, getting your songs synced into movies or ads, I mean whoever wrote that, ‘My head is a jungle, jungle’, but I’d have to draw the line at a Coles ad, I rather do one for Coke!”

“It’s corny to say but just follow your heart and your instinct and don’t aim to be famous, everyone wants to be heard whether you’re a musician or whatever you do, everyone wants to be heard to be validated as a person. It’s tough but the music industry sorts out the sheep from the goats. Either you keep doing it and maybe you’ll have success or maybe you won’t but your motives for doing it should be pure and instinctive. Try and make it joyful, try and enjoy it instead of second guessing.

When we were making this album, there’s one track that goes for eight minutes and someone said “oh you’ll never get that played on radio” and I said “well we probably won’t get much played on radio anyway”, well Triple R have been good, they’ve been playing it and Triple R would play an eight minute track, but as in mainstream commercial radio, that’s just not going to happen, that’s why it’d be great to work on a soundtrack.

I’d just love people to hear the album and come to the live shows, that’s really all I can ask for. The launch is on the 8th July at the Caravan Music Club in Oakleigh. Billy and I do  a regular sing-a-long there on the first Wednesday of every month and it’s absolutely gone off, it’s really popular now and it’s really fun.

If we did do a tour it’d have to be with a minimal band because you just can’t afford to pay everyone, you just can’t. But regional Victoria is the go, we played in Mansfield recently and it was great. It was more of an event. I mean there’s heaps of venues in Melbourne that we will play at but the other thing is I’m my own publicist, my own manager, trying  to run every facet of my life, plus my mums got Alzheimer’s  so I have to look after her. It’s a full time job that gets a bit neglected sometimes because you just can’t do everything.

Ultimately what I would love is for people to hear it and for someone to put it in a film soundtrack and maybe a car ad. You know just something to generate an income. But you have to get those people to hear it. It’s doubly hard when you’re a 56 year old woman in Australia. It is an ageist industry especially if you’re a woman. I’m doing the best stuff I’ve ever done now but you just do it because it feels good and that’s what you do.”

The launch is on the 8th July at the Caravan Music Club in Oakleigh.