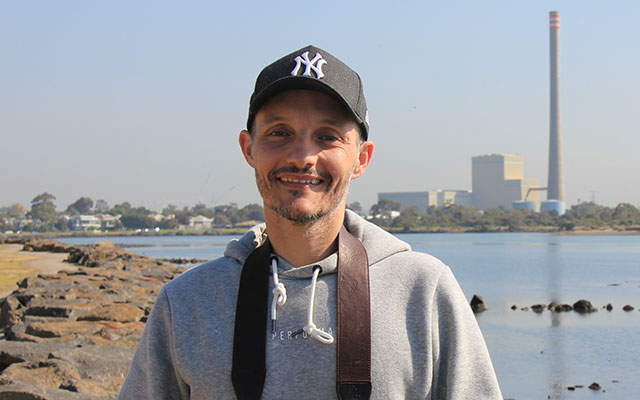 You’d think that with the big smile, positive vibes and all-round community spirit that pours out of Chris Cincotta each day via his now famous Instagram feed, he’d turn out to be just like that in person, right? Well actually, yes, that’s exactly what he’s like, as The Westsider’s editor Derek Green recently found out!

A busy person with more than just social media channels to oversee – Chris is producing books, jigsaw puzzles, calendars and more – so what better way to find the time in his schedule for a meet up than to catch some sun and snap some pics of his favourite subject; Melbourne. Thankfully there was time for a few questions as well.

The “Humans” concept has travelled all over the world from its origins in New York. What was your plan when you took this project on?

I just wanted to have a place that was like a love letter to Melbourne on the internet. There was no real plan per se. I should have stopped doing Humans after 18 months, but I decided to keep going and suddenly look where we are now!

Tell us a bit about the start, the early days of Humans in Melbourne?

I had a stall on the corner of Bourke and Elizabeth streets where I sold my photos. People would just come and sit with me and tell me their stories. I said to my better half one day “I should tell these stories on a Facebook page, I think people would love them”. She said “Oh you mean like Humans of New York”. I had never seen the page but liked it a lot. I said to her “Similar to this but with more photos of the city and the state. So everyone would know they could come and see something that reminded them of how great a city we live in…” That’s how Humans In Melbourne was born.

A big part of Humans in Melbourne is the amazing imagery. Do you have a photographic background?

No, I don’t. I started taking photos when I started posting to Humans and
@Melbourneiloveyou on Instagram.

How many photos are you sent each week by followers?

Ha ha too many to count! Since I started the Instagram account there have been over a million photos tagged with #Melbourneiloveyou

So what do you love so much about Melbourne?

Mostly, it’s Humans. Our resilience. Our love of food, culture, sport and each other.

You currently reside here in the inner west – what’s your Melbourne back story?

I was born in Kew and raised in Burwood. When I was 6 we moved to Merimbula and I lived in the area until I was 25. I moved back to Melbourne 15 years ago and into the inner west 6 years ago. We love it here!

You became a beacon of positivity through a hard time for the city, was that the plan or did it sort of evolve?

It is my natural state, ha ha ha! I do remember saying to my better half at the start of all this “I will remain logical and positive through this.” There is a responsibility when you get the privilege of speaking to over 350,000 people each day. You can choose to be a positive influence and inject that tiny bit of their day with light and hope and positivity, or to be drawn to the negative aspects, only because you know it will get more clicks. I will take the former every single time. Social media gets a bad name not because it is intrinsically bad, but because people are drawn to negativity more. If you want your feeds to be full of more positivity, stop commenting and sharing negative content.

It feels like the social media and the news media does tend to focus on negative content, but you are like an antidote to Murdoch and all the bad news.

That was deliberate; I am just a positive person! I always have been. Negativity is easy to get drawn to, it feels like something in our nature, but the more positive vibes out there the more chance we have of putting that behind us.

So how did the books come about?

I had always wanted to have a book in The National Library of Australia – since I was 10. I never knew what that book would be but after a few years of running the pages I realised I had enough content to make a gorgeous book. Then I kind of fell in love with making books and have now made 3!

“24 Hours in the life of Melbourne” features people from all over the city – did you typically meet, chat and photograph a few people in each location?

For 24 hours I would just wander and stop people randomly. It was kind of a lucky dip as I had no idea who I would meet on the day. I was asked if I would make a similar book in New York, it sounds daunting but it would actually be easier, that city never stops. But then COVID put an end to that idea.

Tell us a bit about your next book project?

I am currently writing “Dogs In Melbourne” and loving every moment of it! Dogs are so much fun and are great to photograph. It’s funny because they also act as a great conduit to tell their Human’s story as well. Some of the stories have moved me to tears. During lockdown I think many people realised just how important their pets were to them. I wanted to create a journal of some of the great stories from this time as a tribute to that.

Your books are high quality, is that hard to do?

It costs a lot to put out a book like a coffee table book. I haven’t held back on anything, the paper quality, the time put into working on all the images, it’s all the best it can be, which is what I wanted to give people.

You’re no stranger to The Westsider, we were lucky enough to feature one of your drone shots on our cover a few months ago!

Yes! I was in The Age and The Westsider on the same day. I showed my mum and she was like “yes but you’re in the Age” and I just said “But The Westsider – it’s the cover!” I was very grateful.

What does Chris Cincotta do when he’s not running Humans?

I love hanging out with my cat. He is a boss. I am a crazy (masochistic) Melbourne Demons fan and love going to games with my family. I love to travel and my better half is the light of my life. If I have her by my side, I am a happy man.