Forget the bathers and towel. Australia’s finest riflemen packed old clothes and a weathered hat for the excursion to Williamstown — a day spent laying prone on flat paddocks facing the sea, elbows dug firmly into the dirt.

A telescope is needed to pinpoint a bullseye, about the size of a person’s head, 1000 yards in the distance. Next comes the mental arithmetic as a bullet rises metres during its aerial flight. Of course, there’s also that tricky Willi sou’wester to allow for.

The rifle butt sits tightly against the marksman’s shoulder. A cartridge falls snugly into the breech. Slow breath, held deep in the lungs. Aim … pressure on the trigger.

A bullet carves through the air. 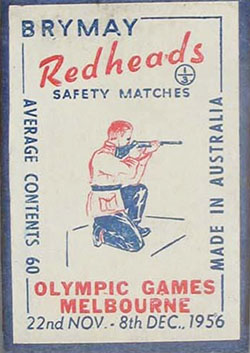 What more fitting place than a funeral home to begin a eulogy for Williamstown’s Rifle Range. As it turns out, the main building, antique water fountain and last-century picket fence of Nelson Bros in Kororoit Creek Road are scant remains of the focal point for Victorian competition shooting for over 100 years. A facility that featured at the 1956 Melbourne Olympics.

But like all testimonials to give pause for reflection — there’s a fascinating backstory to this famous collection of rifle butts, owned by our army from colonial 1876 until the peaceful 1980s. First though, we need to talk about guns. An awkward conversation in 2021.

Our first army of volunteers and the rifle movement

Firearms were used by colonial settlers to put food on the table. That said, failing to mention the gun’s murderous potential, laid bare in Victorian massacres of First Nations Peoples, would only perpetuate a travesty.

Shooting lent itself to competition; in fact, Australia’s first sporting team was a group of rifle shooters. And while there was no doubting the popularity of the sport at the time, it was a young country’s need to defend itself that propelled competitive shooting forward.

Our first homegrown fighting force was an army of civilian volunteers that lasted until a part-time, paid militia was established decades later. Indeed by the mid-1800s, Williamstown possessed three Volunteer Corps: Naval Brigade, Williamstown Garrison Artillery — and the Rifles. The army viewed volunteer riflemen opportunistically as a source of battle-ready soldiers, and effectively took control of the sport by providing ammunition, funding and leadership to rifle clubs and associations. Shooting at a bullseye to win a medal had been transformed into a service to the nation.

Bygone Williamstown, described in Lynne Strahan’s book, ‘At the Edge of the Centre’ was known for its patriotism to the Empire. A time our attitude to Britain is best characterised as ‘servile’. ‘England was my nation/Williamstown my dwelling/Christ my heart,’ reads a weary memorial at the local cemetery. So it was only natural the town rallied when England sought to quell unrest in China, called the Boxer Rebellion. Make no mistake, xenophobic displays of loyalty could be decidedly abhorrent: ‘capturing half a dozen “pig-tails’’ (a Chinese hairstyle), and raffle them for Williamstown charities’, boasted at one local public meeting.

More calls to arms followed: ‘Mother England needed the help of its children’ during the Boer War. And, around two thousand locals enlisted to fight the 1914-1918 ‘War to end all Wars’, where 270 Williamstown, Newport and Spotswood young lives were lost.

The militarised rifle movement thrived — albeit by the end of the century as an auxiliary defence force, or reserve, to the official army — in a newly-founded country that gallantly fought an Empire’s wars. At its peak, rifle club membership approached 100,000 nationwide. But not without the help, in Victoria at least, of a prominent influencer.

The driving force behind ‘The Age’, David Syme, was the ‘founder and foster father of the rifle club movement in Victoria’, according to an 1954 article, ‘RIFLE SHOOTING — A Sport That Has Served Its Country Well’.

Syme’s newspaper, The Age’, campaigned successfully in print for the building of a large facility at Williamstown. After four years of debate, the Victorian government relented, purchasing over 300 acres on the outskirts of the growing coastal town. And once built, the facility at Williamstown was opened in 1878 by the governor of Victoria — accompanied by his wife, her ladyship dressed in her best hoop skirt, who was granted honour of the first shot to be fired.

Military training, including the exciting Australian Light Horse troops, took place there. So too, local and interstate competitions. The rifle range also hosted matches against crews of Royal Navy warships and other international troops. When the US Fleet visited in 1910 they competed against Melbourne Rifle Club at Williamstown.

Australia’s best marksmen would gather at the windy paddocks on the edge of town when it was Williamstown’s turn to hold the annual competition for the Queens/Kings Prize medal, the highest shooting award in the land.

Despite attempts to re-establish closer ties with the military, the demotion of the rifle movement to a defence reserve prevailed. Not that this saw an end to shooting. Civilian clubs were growing, and sporting shooters flocked to ranges, including Williamstown, for decades to come … in all shapes and sizes.

Young Florence Hatton, ‘a most attractive brunette, tall slender and very graceful with the frankest manner and sweetest voice imaginable’, was also at the ranges — laying on the ground beside a King’s medal winner, squinting through a rifle sight at a target.

Like other women who enjoyed shooting, Florence had taken up the sport on a small-bore, miniature rifle range. She joined the club of her employer, the Postal Institute Rifle Club, and proved such a competent shot, Florence was encouraged to try the open range.

An 1929 article in ‘The Australian Woman’s Mirror’, lists her accomplishments including a third stage of the King’s Prize at Williamstown, which was soon to be renamed Merrett Rifle Range after a celebrated rifleman. Florence insists she was always met with kindness. However, the sport would not officially welcome her, or the other handful of women to reach the upper echelon of rifle shooting, for another 36 years.

We needed houses, not guns

Increasingly, townies looked upon the facility as a nuisance. Shooting was noisy, and there’d always been worrying incidents: ‘Fisherman sues after being shot in the eye’ begins an 1980’s article when a Newport teen was accidentally hit while collecting nets by the shore. Deaths had occurred, but were deemed accidents after inquests. Quite frankly in peacetime, the large tract of land could be put to better use.

The relationship between the rifle movement and the military had ended for good in 1965. Memories of the heady days of the ‘56 Olympics were fading. Football, cricket and sports other than rifle shooting now held the public’s attention. It was time. The Department of Defence sold the range to the Urban Land Authority in 1986. Williamstown could have the housing estate it had called for ever since the end of World War Two when an acute housing shortage meant one local family lived in a stable.

Project-built family homes popped up at the new Rifle Range Estate, where shots once rang out. And there’s something strangely heart-warming about one of Victoria’s eleven marine sanctuaries, Jawbone Marine Sanctuary, being established in waters that once felt the impact of rifle fire.

Ask around town. The old range seems to come alive listening to locals recount memories: Being hustled into a green military truck as a fresh-faced high school cadet for 303 drills at the coastal paddocks. Gently rocking in a small dinghy with rods dangling over the side fishing for snapper, listening intently to father’s instructions: ‘Sing out when the lights turn red!’ Ignore the warning signal and wayward bullets would soon be whooshing by.