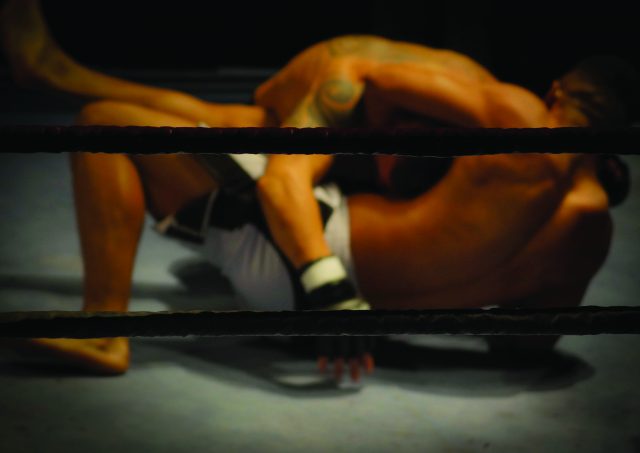 With the recent impact of MMA and talk of it now becoming legal in Melbourne, I decided to take at look at some of the pro’s and con’s of an increasingly popular entertainment.

Mixed Martial Arts (MMA) dates back to ancient Greece and the sport of pankration which mixed grappling and striking. There have been various other types of no-holds-barred competition since. The modern incarnation – one of the fastest growing sports on the planet – began in 1993 when a promotion called the Ultimate Fighting Championship (UFC ) was formed to join people from different martial art disciplines to see who would reign supreme. There were few rules and the events had a reputation for being extremely violent. Once a unified body of regulations was introduced, it cleaned up and grew into the billion dollar industry it is today.

So to begin this bout, in the blue corner, from the streets of Hardtown to the bright lights of the Octagon, we have ‘The Pros’…

Whether you are male or female, it is important that if you ever get into a situation where you needed to defend yourself (or others) from harm, you had the proper skills to do so. MMA offers many skills that one can develop from a young age for self defence or to defuse a potentially negative event, sometimes without even having to throw a single kick or punch.

You can be humbled pretty quickly in a physical confrontation. The will to improve and constantly develop a certain technique or skill takes discipline. MMA, being one of the most physically demanding sports in both strength and fitness, requires tremendous dedication. The bond and respect given and earned from peers in MMA is second to none.

Students are taught to recognise danger and how to best avoid harm. When unavoidable, the art of jujitsu (an ancient Japanese fighting style adapted by the Brazilians) focuses on grappling to put a combatant in a submission hold. MMA fighters witness first hand the effects of the injuries that can occur from physical combat against other trained students, so using their skills on someone who is not trained, the results are likely to be worse. Being in a controlled environment where they experience the potentially devastating effects of physical injuries, MMA fighters appreciate the terrible consequences of violence.

Establishing confidence, especially at a young age, is crucial for developing into a healthy, happy adult, and MMA can be a great outlet for developing confidence, learning a new skill and seeing their strength and fitness improve. Having the skill to protect yourself provides a framework of self belief and also sets new goals to achieve.

Having achievable goals in life and working hard allows us to see that hard work pay off. Experiencing something blossom from nothing gives a great feeling of satisfaction. From white belt to black there are a many milestones a student can set and achieve. Young or old, whether you want to compete professionally, or a find new way to get fit, MMA has something to offer the whole community.

And representing some of the questions that concerned members of the community may have around the impact of MMA, in the red corner we have ‘The Cons’…

Could the violent nature of the sport encourage youth negatively?

Being a combat sport, people are always going to be concerned about the potential for youth to be influenced negatively, and to use these techniques for reasons outside of self defence. Ultimately it is up to parents and MMA trainers to sensibly coach children and teenagers and to teach the consequences of using MMA for the wrong reasons.

Is there potential for brain trauma after taking repeated hits to the head?

One of the concerns is the potential for traumatic brain injuries, but MMA is statistically much safer than boxing. When a fighter is down in MMA, that referee soon puts an end to the bout, unlike traditional western boxing where fighters are given the count of 10, even when they are significantly injured. With the addition of ‘submissions’ in MMA, there are other ways a fighter can win without any damage being inflicted to the head.

Does the sport promote violence?

The general opinion outside of the MMA community is that the sport is nothing more than the promotion of violence. But without giving these people a proper avenue to compete in a safe controlled environment, they will seek to hold these competitions underground using shady rules and regulations. People have also raised concerns about the use of ‘the cage’, or ‘Octagon’. The Octagon is there to protect the fighters and spectators, as MMA uses a more complex set of fighting skills than upright western boxing.

What if people use the skills they have learned to assault people?

Certainly, there is always a worry that people that have the skills to inflict serious physical damage with there bare hands will then use the skills for the wrong reasons. In reality, these people are likely to abuse others with or without the training, and the hard work and effort that the vast majority of the MMA community put into honing their skills should not be put in jeopardy over the actions of a select few.

After five hard rounds the judges are currently tallying the scorecards. Obviously MMA has many good and bad elements, but what is certain is that it is not going away any time soon. Who do you think won the bout between the Pros and the Cons in today’s MMA main event?

PUTTING THE PERSONAL INTO PERSONAL TRAINING

PT CURIOUS – THE EXPERIENCE OF A FIRST TIMER