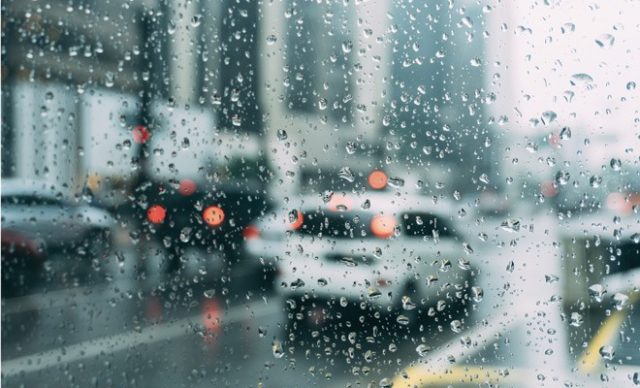 Melbourne, Victoria, in the winter. Grey skies, cold air temperatures, drenching rainfall. We are used to this. Usually the citizens of our town paddle our own canoes in this miserable weather. The roads are clogged; on the railways, there are train delays. Our wise old city fathers, years ago, decided to construct the major arterial roads of Melbourne on the flood plains of creeks. Every time there is heavy rain, the creeks arise, resume their ancient paths, and cars end up aquaplaning.

Still, Melburnians are brave. Fear not, our city is renowned for having four seasons in one day. Look, the clouds are clearing in the west. Is that the sun emerging? No, another large, grey, gloomy cloud dumps more precipitation.

In the suburb in which I dwell, we have the highest annual rainfall of any Melbourne suburb in this urban sprawl. More rain, then a patch of sunshine. It is a good day to be home, not commuting in the rat race.

Floods in some suburbs, roads under water. People do not drive into a bushfire, but some motorists feel the need to drive on flooded roads. I head off to my suburb’s centre in blithering rain. I am going to meet and greet the regular shop assistants and some acquaintances. There is a standard topic of conversation.

You guessed it, our weather.

Opening verbal gambit: “Cold, isn’t it?” I always feel like being rude, and answering, “Yes, it is cold, it is like, winter. We’ve got that it is winter.” But I don’t.
Or second verbal gambit. “Wish it would stop raining!” Or consequent third verbal gambit: ”Need the rain, good for the garden.” We Melburnians are a philosophical bunch.

I have a cyber pen pal who lives in Florida, USA. The first half of our weekly emails is taken up with discussing our respective weather. It is very interesting to swap notes. Right now, in Florida, it is summer, hot, very muggy, too hot even to swim in open-air pools. From June until September, Florida is on hurricane alert, and all residents there are prepared to evacuate at any stage. At least Melbourne does not have hurricanes.

I also have an online student, from Saudi Arabia, who now lives in Melbourne. She is still bemused by our obsession with discussing the weather. In her land of origin, every day is hot and sunny, day after day, each day hot and sunny as the next. When greeting each other in their normal routines, no weather is mentioned. Nothing to discuss. Arriving in Melbourne, my student had to acquire a new conversational convention; the weather.

So, heading off to the thriving hub of my suburb. Hmmm, what to wear? Clothes, of course. First, my bikini, thongs, then fleecy tracksuit, plus a hooded jacket, with gloves, gumboots and a waterproof jacket. Do I need sunblock if the sun emerges, if it ever stops raining? Do I need Aeroguard, or Vicks Vaporub for chesty coughing? I top this fetching sunscreen with a woollen beanie, or cap, taking an obligatory umbrella.

Yes, all prepared for four seasons in one day, armed with my conversational gambits. “Cold, isn’t it. Still, need some rain.” Only a couple of months ago, we were all sweltering, praying for a cool change. That reminds me of a story of the olden days. When my senior sister was doing her final secondary exams, on a typical summer’s day in Melbourne town, it was at least 100 degrees F. The sun was blazing on the tin-roofed classrooms, no fans or air-conditioning.

The President of the Mother’s Club, also President of the tuck shop, who doubled as the school janitor, cleaning the loos, paraded like a galleon, (chunky, loud lady), past the concourse. Her voice boomed across the school. “Don’t worry, kids, the cool change has hit Warrnambool!” (about four hours drive to the west). “Work hard, girls, you don’t want to end up a cleaning lady like me!” We all ended up doing housework and cleaning the loo anyway, but that is what women have to do. Cherchez la femme!

More rain, a patch of sunshine. Yah, blue sky. “Need the rain, good for the garden!” Whether we talk about anything else, we talk about our weather. Four seasons in one day!