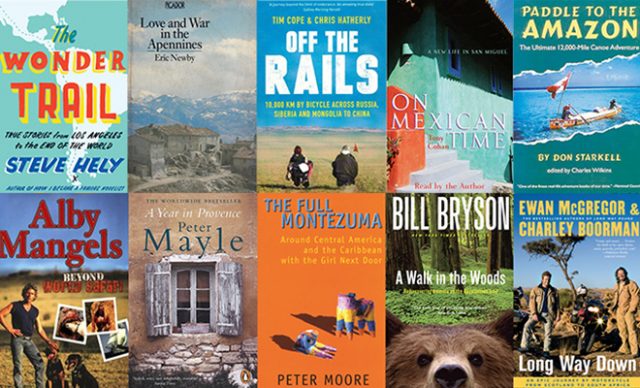 At a time when we are still unable to plan or live out our travel dreams, we can still sit back and imagine what may be possible not too far down the track. In the meantime you have probably seen those “I have been tasked…” Facebook posts where people share their best albums, photos or books with no explanation. I find the explanation the most interesting part, so here are 10 books that have inspired me to explore the world, absorb its cultures, history and cuisine, and yes, write – complete with explanations.

I’ll start with a book by a close personal acquaintance, ex-Sydney copywriter now London based “travel influencer” Peter Moore. In this his third book, he convinces the girl next door (forthwith referred to as simply GND) to join him on an ultimately regrettable whim as he explores Central America with the irreverent gusto you’d expect from someone who had written a book called “No Shitting in the Toilet”. This is old-school back-packing; we’re talking street food in Guatemala, dodgy bathrooms in Belize, and the civil unrest of a Honduras in post-Hurricane recovery mode. Throw in a test match in Jamaica, jungle ruins in Mexico, and the glorious white sands of Caribbean beaches and you’ll soon forget the slight awkwardness and lack of warmth evident in his swiftly deteriorating relationship with the GND.

First and foremost this was a television series chronicling a well-known actor and his less well known travel partner as they motorcycle their way from the northern tip of Scotland to the southernmost point of South Africa. The book gives further insight into their journey, personalities and relationship. That Ewan McGregor comes across as well-meaning but slightly dopey and Charley Boorman as intense and self-absorbed adds to, rather than detracts from the authenticity of their travels. For many of us – me included – sharing their road trip through this wild but inspiring continent is as close as we’re ever going to get to the sandy film sets of Star Wars in Tunisia, a crowded ferry to Sudan, or an audience with Paul Kagame, president of Rwanda. Throw in border crossings as treacherous as any river, and you have yourself a rollicking adventure perhaps best enjoyed with a (perfectly safe) turn of the page.

An Intrepid pair of Australians (is there any other kind?) set off on a cycling journey from Russia to China, taking in Siberia, Mongolia and the unique challenges that only mountains, deserts and local officials can present. Over 14 months they battle snow, mosquitos, and each other, but as a reader, I’m glad they did. Spoiler alert – they don’t both make it all the way, but remain friends long enough for each of them to receive an author’s credit. Ultimately they learn so much more than the basics of the Russian language, emergency mechanical repairs, and how to treat frostbite – they learn about themselves and each other.

A Walk in the Woods
Bill Bryson

I wanted to include a Bryson title as I’ve read them all and enjoy his relatable, easy-reading style. In this one, Bill enlists an old buddy – unstable, bloodshot and unfit – who he hasn’t seen in years to join him on a 1,300km walk along part of the famous Appalachian Trail, which links the US states of Maine in the north east, and Georgia in the south. In reality the walk is just a vehicle for the author to discuss and expand on a variety of conversational topics like world events, relationships, and personal hygiene, but there is something appealing about doing just that on a long walk that no-one else on earth would ever have time to do. Having myself walked a few trails in the US where I was advised to “clap loudly every few hundred feet” to give any bears ample warning of my approach, I knew where Bill was coming from. I never did understand the clap thing though – was it to scare them off, or just a courtesy to let them know they should have a light lunch as dinner was on its way?

Paddle to the Amazon
Don Starkwell

In what reads more of an adventure than a travel memoir as such, we are left unclear as to what possessed a man to want to paddle his 21 foot canoe from Winnipeg, Canada, down the length of the Mississippi river, and along the east coast of Central America to the mouth of the Amazon in Brazil. But with maps, provisions and two sons in tow, that’s exactly what Don Starkwell sets out to do – and eventually does – even if his team is as fragmented as his sanity at the journey’s conclusion two years later. Leaky boats, family feuds, and borderline starvation will do that to you, but surviving being arrested, shot at and being mistaken for drug smugglers is what builds true character.

I’ve been that guy. The guy that thinks he’s funny, that breaks a long silence on a bus by cracking his knuckles, tells dad jokes on a plane when everyone else just wants to sleep, and does the English villain voice in a crowded lift. Well Steve Hely is that guy too – only better! The Wonder Trail’s focus is not so much on ticking off the sights of the Gringo Trail, it’s wonderfully mired in humorous situations and the people he meets along the way, who are mostly “alright”. If you’ve ever wondered what it’s like to drink a shaman’s manky, hallucinogenic brew, get (almost) kidnapped in Panama, and cross the barren Atacama Desert in Chile from the comfort of your favourite chair then Steve Hely is the idiot for you.

When I was a kid I saw World Safari the film and had an immediate urge to turn my back on my mundane existence, buy a yacht, enlist the nearest super model and sail the world. The only hurdle was that I was 12 years old. Fast forward 30 years and Lynn Santer finds an Albi Mangels that has fallen on hard times. Maybe I made some semi-smart life choices after all. Still, nothing can take away the years of adventure that Mangels undertook and documented – the roaring fires on deserted islands, broken down jeeps and bribing of border guards – with plenty of adversity and a few moments of tragedy thrown into the mix.

For some of us, the idea of a “tree change” is a shack with a fireplace halfway between Daylesford and Hepburn Springs. For Tony Cohan and his Japanese artist wife, it was to sell everything, leave the rat race that was LA, and move to a small town in the hills of Mexico. The leisurely long days are spent wandering the cobblestones streets, picking ripe avocados and mangoes, and slowly renovating their centuries-old, crumbling casa, and the warm nights listening to local musicians, the crackling of cicadas and sipping Mexican beer. As a travel book it’s not much of a guide, unless of course you are looking for the blueprint towards a slower paced, more satisfying version of life.

Love and War in the Apennines
Eric Newby

In this personal memoir, meets adventure, meets story of survival (whilst being hunted by the Nazis), Newby almost makes World War II in the mountains of Italy sound romantic. OK so the constant fear and all the death does detract a tad, but it’s still impossible not to be dragged into his life through his literary warmth and knack for story-telling. Amazingly, even when written 25 years after the end of the war, Newby still felt compelled to change some names and places to protect those who may still remain, which just highlights the lengths to which he and those around him went to survive, and yes, love.

A Year in Provence
Peter Mayles

Without knowing it (or knowing me) Peter Mayles wrote the story of my life. Wine, cheese and baguettes, casually cycling between fields of poppies and lavender by day, sampling a nice red on a balcony overlooking a vineyard at night. This book encapsulates everything I love about France, without having to deal with the hardships of actually living there – chilly Lubéron winters, crumbling walls and infamous French officialdom. If your dream is to buy a 200 year old farmhouse and immerse yourself in the culture, history and village life of France, then this one’s for you.

CUFFDOWN OUT OF LOCKDOWN – WILL BUBBLE ROMANCES SURVIVE IN THE REAL WORLD?