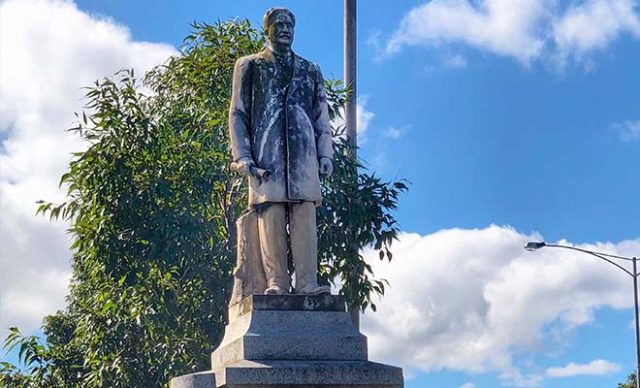 Almost a century ago when Joseph Goble’s ministry began, Footscray was a downtrodden, stinking industrial town on the wrong side of the Yarra.  This humble Baptist pastor forged such an unlikely bond with his community, history remembers him fondly as one of our most-loved local figures.

Now is the perfect time to be reminded of the better angels of our nature.  And reflect on an unassuming leader immortalised by a statue that stands untroubled by the bustling Footscray intersection nearby.  What a tonic in our age of populist politicians to stumble onto a story speaking to the transformative power of humility and compassion.

Born near Port Fairy mid-1800s, young Goble moved with his mother and grew up in Melbourne’s poverty streets.  His upbringing though unfortunate, was fitting for the calling to come.

After leaving school mid teens, Goble worked in factories and on the railways before securing an apprenticeship as a printer.  The union movement offered hope to beleaguered twentieth century workers and inspired Goble, who would later be elected President of the Printers Union.

Already no stranger to the suffering that accompanies social disadvantage, Joseph Goble was newly married with a son when his wife died from typhoid, a disease still prevalent last century in lower socioeconomic areas.

As a fresh-faced “boy preacher” he made such an impression on a Footscray congregation that a decade later, hundreds of parishioners travelled to Port Melbourne urging the now thirty year-old Joseph Goble to return.

“He brought with him a worker’s and staunch trade unionists ideals of the dignity of labour and the brotherhood of man, and a Christian’s ideal of practical Christianity derived from the example of the Good Samaritan,” writes historian John Lack in A History of Footscray.

Appointed leader of the Paisley Street Baptist Church in 1895, Reverend Goble “practised a personal socialism” —  quietly distributing most of his income to the needy after limiting his spending and accepting no more than the average worker’s wage as a stipend.

Years later, as many as two thousand, atheists among them, would crowd in to hear Sunday night’s message at Federal Hall, a large public venue once located in downtown Footscray.

Thanks to an Independent newspaper report describing the memorial service for the 1908 railway disaster in Sunshine, we get to encounter the stirring, occasionally dramatic, preacher on the pulpit.

“When the night is dark and the waters rise man wants a God whose heart throbs with pity,” Goble says at one point, delivering a very human Creator to the grieving congregation.

As to why the Almighty would allow such a tragedy, piety seems remarkably absent in the minister’s message: “ … when the last word of explanation has been uttered upon the problem of pain and death, we still stand upon the verge of the blackest mystery.”

To be clear, Joseph Goble was a devout Christian, telling mourners: “They could thank God that the pain of parting was overtopped by the joy of the Christian hope of re-union,”.   And urging those present: “to order their lives that death would not surprise them … Be ye ready!”

The Spanish Flu pandemic hit Australian shores a decade later.  And three natural leaders emerged in a Footscray vulnerable in the absence of a major hospital.

And as Chairperson of the Unemployment Relief Committee, Joseph Goble distributed aid with humility during desperate times, before the creation of a social security safety net, that saw returned World War One soldiers near starvation.

John Lack notes how officialdom seemed lacking next to the efforts of these men: “Footscray’s middle-class of shopkeepers, contractors and industrialists, notably their wives, bustled about on good works in 1919 under the supervision of Gent, Hoadley and Goble.”

Despite widespread popularity, Joseph Goble was never aloof.  He routinely made his rounds, visiting believers and non-believers alike, on a bicycle reinforced to carry his tall, thickset frame.  It’s said, he never missed a game played by his cherished Footscray Football Club.  And by sharing in the day-to-day hardships of working class life, he endeared himself to the people of Footscray.

Goble was appointed the inaugural president of the Baptist Union of Australia towards the end of his career.  However, 37 years after his Footscray ministry began, Joseph Goble was exhausted, and in 1932 died unexpectedly.

This cheerful, kind-hearted minister had become a beacon of hope and compassion to the people of Footscray during war, pandemic and economic depression.  And they demonstrated their affection by attending his funeral in droves, making it the largest seen so far in Footscray.

Locals in the thousands lined streets to bid farewell as a hearse passed by.  It carried the coffin of the man who once said: “When my heart is opened there will be found engraved on it the word, “Footscray’”.

Public donations paid for a memorial that was erected close to his Footscray parishioners.

You can see it driving through the Geelong Road and Barkly Street intersection.  Pay attention though.  Blink and you miss the elevated marble statue half-obscured by trees on a median strip adjacent Footscray Primary School.