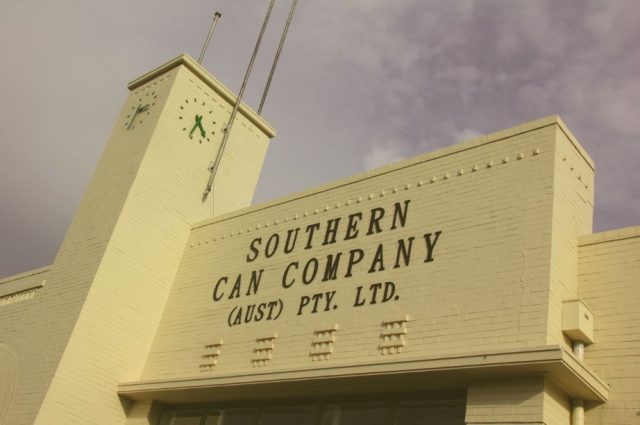 Since the demolition of the old Dimmeys-Forges building on Geelong Road and the subsequent token, perhaps unnecessary preservation of the façade, you may have noticed the reinstatement of a part of West Footscray’s history – the proud lettering of the former Southern Can Company (AUST) Pty Ltd.

Having only ever known the building as the in-need-of-work, and later dilapidated and abandoned Dimmeys-Forges building, I wanted to find out more, and with a bit of internet detective work and the help of the Footscray Historical Society, I did.

A report in the May 29th, 1937 edition of The Advertiser announced the development of the site that was to become the company’s home and declared the new building “will be attractive” and celebrates the facade as “harmonising burnt clinker and cream brisk, and dominated with a clock tower of simple, attractive lines”. The cans started coming down the line in 1939, and, like most manufacturers during WW2, production increased as the war effort gained momentum, reaching one million cans a day by 1947. This was all achieved without trucks of course, with the rear of the factory accessing a rail line at Sunshine Road.

Ultimately the company was bought by an international conglomerate, and the site taken over by Forges in the 1980s. The building came under Heritage Review by Maribyrnong Council in 2000 and noted the style as being “Dutch Modern”, the listing being upheld during the more recent development that took place over 2014/15.

Now that we know a little more about the company and the site, the only remaining questions are whether the new tenants have plans to fix the clock or run a flag up the flag pole.