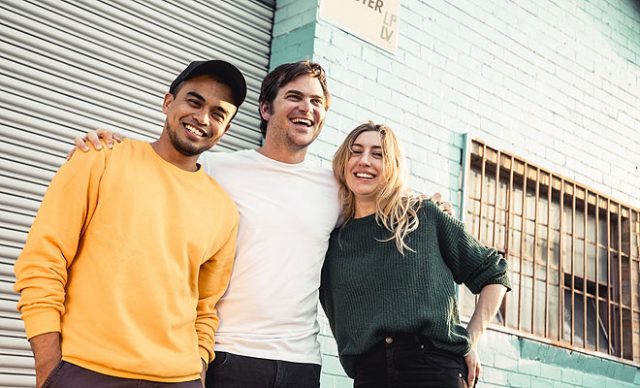 What do a former UN-worker and a journalist do when they become disenfranchised with the world around them? Start a band, that’s what!

Conceived whilst living through the military coup in Bangkok in 2014, Miles Recommends is the brain-child of Footscray-based singer/songwriting and production duo Des Atkinson and Lou Cadell. Taking their moniker from their childhood video store clerk, Des and Lou (like the movies Miles recommended) defy genres through invoking a critical spirit that dissects the social norms of today. With the addition of Filipino rock god Ken Estioko, Miles Recommends blends rock, folk, blues and pop-influences with catchy tunes, soulful harmonies and cheeky turns of phrase that will have you dancing and singing along in no time.

The new single You’re Never Alone came about from watching the world happily skip into the Anthropocene as vested interests continue to distort democratic institutions. Yet despite having the weight of the world’s problems on your shoulders, and knowing there’s no promise for a brighter future, it’s important to remember that, ‘You’re Never Alone’:

“The world is a crazy place at the moment and it’s hard not to feel disheartened and anxious about what’s happening. Climate change, the growing global disparity between the rich and poor, the weakening of democratic institutions, mass pollution – it’s overwhelming. You’re Never Alone Is that voice that says ‘I’m overwhelmed too, and whilst I can’t make it better for you, I am here with you’” Lou Cadell

With a pulsating urgency guided by yearning and soaring vocals, ‘You’re Never Alone’ takes the listener on a thrilling journey into the troubling unknown. This is the first single taken from the forthcoming debut album from Miles Recommends, Keep it Warm, due for release in early 2020.

‘You’re Never Alone’ is Miles Recommends first release since their successful debut EP ‘Extended Play’ in 2017, whose lead single ‘Crazy House’ enjoyed rave reviews and solid airplay across Australian radio including Triple M, Double J, PBS, Triple R, and 4zzz, and internationally on college radio in the US and Canada, and across numerous stations in the UK and Europe. This release coincided with them winning the National Oxjam Gig Contest for 2017, thus being sent as ambassadors to BIGSOUND 2017. ‘Crazy House’ also hit # 19 on 4ZZZ’s Hot 100 for 2017.

‘You’re Never Alone’ is out April 5, 2019, and is available on iTunes, Bandcamp, Spotify, Amazon – everywhere great music can be found!