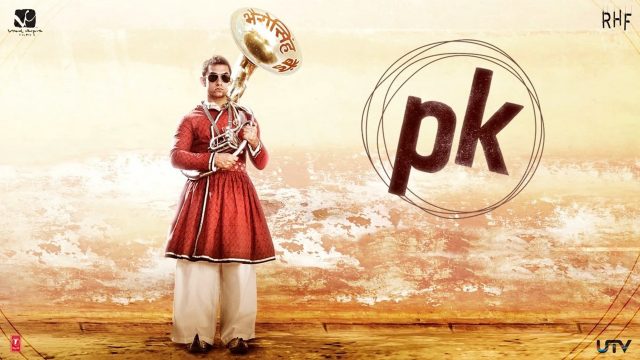 The name pK makes him sound drunk, but trust me, the guy doesn’t need a drop of alcohol. Why not? Because he’s a natural! He does eat a lot of Paan though. Now I’ve got you wondering what a Paan is right? Paan is a beetle nut leaf that is wrapped around a number of condiments such as jaffle paste, fennel seeds, cardamom, chewing tobacco (optional), and some natural sugars to give it that special sweetness – you can think of it as an Indian mouth freshener. It’s an acquired taste that suits characters like pK, and of course myself!

Despite his background pK is not a stereotype. In fact, he is quite unique! He never buys his own clothes; always nicks them from others, and targets people in a compromising situation. PK’s pants are stolen from a cars back seat while Mr. Sharma is busy getting it on with the shiela from downtown, and he flicks his shirts from men getting a cut and shave at the local barber shop. I’m not sure if pK wears underpants, as is evident from the movie poster where he has an old boom box covering his privates – he does seem to shave and shower though!

I know what you’re thinking; pK is a thief right? Nope! In fact, pK is as innocent as your neighbour’s 3 year old boy that doesn’t know any better. While pK’s innocence makes him adorable to everyone, his silly mistakes often find him in awkward situations. Despite his silly demeanor, pK’s actions often bring about a metacognitive shift among members of society that may not have had a thought provoking social experience with a fool of the first order that is pK. Unknowingly, pK is causing some serious drama whilst adding a funny twist to almost every situation.

On the 5th of December I had the pleasure of participating in a press conference with Aamir Khan, the actor that plays pK, organized by Mind Blowing Films. At first, I felt like this was going to be awkward and difficult, as Aamir must get asked all sorts of questions. But as soon as he appeared on the TV screen, I felt no difference between watching him in a film or talking to him during a video-conference – Aamir is as organic a person you will come across in your daily life. This was quite a pleasant surprise, as on most occasions one would expect a film superstar to be all airy and egotistical, but Aamir was extremely grounded and polite. It’s safe to say that Aamir Khan is quite a versatile actor that seems to be extremely picky with his films, and doesn’t release more than one film per year. With each new film, Aamir surpasses his own threshold as an actor, and gives not only his fans, but also the critics a massive surprise, every year. During the conference I asked Aamir to shed some more light on his auditioning process: “I always ask the producers to read the film script to me, so instead of reading the script myself, I get to hear it and imagine the scenes. This allows me to explore beyond the script and get a feel [for] my character. I only say yes to [a] film if it truly resonates with me as a person, and that’s what drives me to pick films, not roles, because to me the message of the film is far more important than the character I am meant to play,” he said.

If a picture speaks a thousand words, then imagine what a motion picture like this one is capable of doing. So get ready with your popcorn and soda, for pK is about to tickle your funny bone with his Chaplin like, Forrest Gump personality. Don’t be afraid; there are English subtitles without grammatical errors too.

PK is distributed in Australia and New Zealand by Mind Blowing Films. The film opens in cinemas on December 19th. Visit www.mindblowingfilms.com for details!