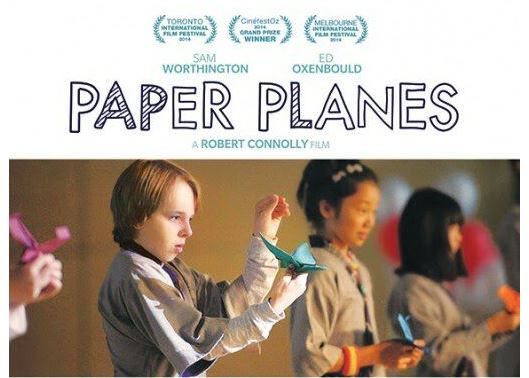 This is a sweet movie for pre-teens trying to ‘figure it out’, which is what young Dylan Webber is told by his teacher, Dad and Grandpa in his quest to make a paper plane fly far enough to make the Sydney State Championships.

The film opens a few months after the death of Dylan’s mother, in his outback New South Wales home, where he lives with a loving but bereaved father and bikes to school, stopping to throw strips of bacon to an eagle on the way. Dylan’s fun-loving, law breaking grandfather and Kiwi mate from school help him ‘find his wind to kill’ and he scuffles with his Dad about the Sydney trip until a garage sale is organised to raise the funds required.

On a winning streak in Sydney, then off to Japan, Dylan meets kindred souls and one precocious competitor, but a sweet young Japanese girl teaches him to design a paper plane that is as ‘beautiful and surprising’ as it is aerodynamic. This film is not without a family’s stark reality, but the soundtrack and shots of paper planes flying are gorgeous and uplifting. A nice one for kids aged eight to twelve.